After the Lockdowns and Race Riots, This Is What Will Take America Down

America is going through a softening up period. It is clear that plan to destroy America, in its present form, is well America is being torn apart. The nation is disintegrating into self-serving regionalism. Presently in America, there is a globalist inspired effort to destroy the United States from within.

What s going on now, is theater for the real and planned takedown of America. Let's start with where are presently at and then move the plot forward.

Awakened Amercans are keenly aware that America is being taken down by the Bolshevik, subversive leftist forces in the Democratic Party on behalf of their Deep State controllers. Up until this time, America has been subjugated by a greatly exaggerated and quickly burning out bioweapon that does not significantly impact most of the citizens of this country. Yet, despite the ever-growing evidence of a significantly dropping COVID-19 death rate, the restrictions are increasing on America because of the fraud associated with data collection and COVID-19 assessments for a multitude of reasons already covered in depth on this site. This can only mean one of two things:

1. The treatments for COVID-19 are increasingly so successful, that America will not even need a vaccine to combat the virus. There is no question that there is some truth to this statement. However, treatment is still catching up with need.

2.  The most likely scenario lies in the fact that it is unlikely that the death curve, compare to the infection rate, contains massive fraud because right now the death curve and the infection rate are negatively coordinated (ie meaning that as one measure goes up, the other goes down). This is a negative correlation, neaning there is no correlation between infection and death rates, which is highly unlikely. And if true. except for those with underlying conditions, where COVID-19 effect become exaggerated, it does not matter if someone becomces infected, in fact it leads to the desirable herd immunity condition, which is desired. So, how does a negative correlation exist? It is highly likely that all the pseudo-science techniques used to diagnose, are having an unwarranted and false effect on the situation. In other words, there is fraud on the data collection side with regard to infection.

The model for the lockdowns is deteriorating because our eyes. Subsequently, the extremist Left has  temporarily took their eye off of the ball. They used the George Floyd murder to launch a well-coordinated attack upon every blue city and state with the help of local democratic politicians.

The so-called and well-orchestrated race riots are showing signs of burning out as well. Therefore, one has to act what is next. And what is next is a withdrawal from the union.

When the violence has completed the task of totally destablizing the United States, we can expect that the job will be completed through a series of two actions: (1) succession; and, (2) a mop-up Red Dawn invasion. This article will take a closer look at seccession.

Here, the original idea for withdrawing from the union began with the Civil War (1861-1865). Obviously that movement fell short. However, the concept of breaking up the union returned in the early 1970's under Richard Nixon, and the United Nations in his 10 region unit creation which was designed to replace the 50 state model. One has to now wonder if the Supreme Court is covertly behind the plot to break up the United States? To heighten the suspicions, one only has to look at their last Supreme Court decision which broke apart the state of Oklahoma. In doing so, the Court, overturned 140 years of history. I am not denying that there is not poetic and real justice here, but is is possible to push back the hands of time?

Is the Supreme Court covertly behind the plot to break up the United States? To heighten the suspicions, one only has to look at their last Supreme Court decision which broke apart the state of Oklahoma. In doing so, the Court, overturned 140 years of history. I am not denying that there is not poetic and real justice here, but is is possible to push back the hands of time? 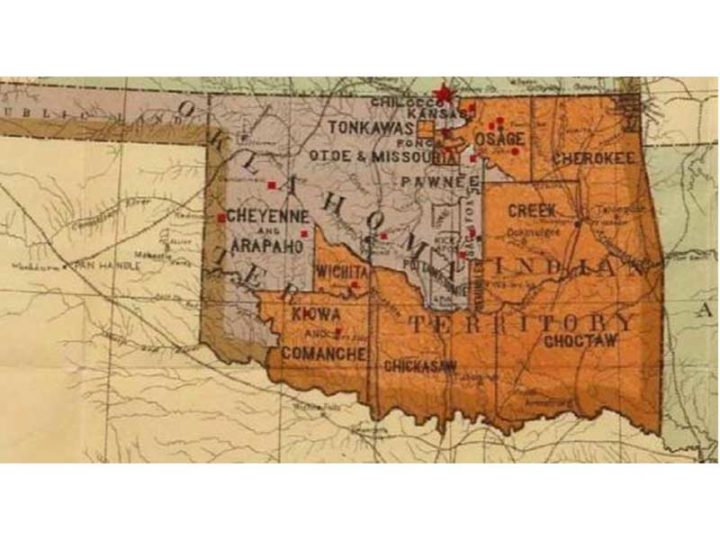 On the surface, this looks like we now have a 51st state when the dust clears from this ruling. If the Supreme Court will do this to existing homeowners who had nothing to do with the theft of Native land, then what will prevent them from doing to same in the following manner:

Before the real invasion of the United States commences, there are going to have be 5th column forces who are absolutely dedicated to establishment of LaRaza's pipe dream of a taking several states from the United States and creating their own nation. Perhaps America’s greatest domestic strength lies in taking in immigrants and assimilating them into our country as Americans. However, what Obama wants and is in the midst of doing, is nowhere near what we bargained for as a nation. There are two groups who have repeatedly called for the seizure of several states and make them into an independent country, and these two groups are La Raza and MEChA. The concept of Aztlan has been sanctioned by the UN. This is the same UN that is transporting military grade vehicles within the United States. This,, too, is a violation of our immigration laws, not to mention national security.

These groups have historically taught that Colorado, California, Arizona, Texas, Utah, New Mexico, Oregon and parts of Washington State make up an area known as “Aztlan”, a fictional ancestral homeland of the Aztecs before Europeans arrived in North America. MEChA’s  founding principles are contained in these words in “El Plan Espiritual de Aztlan” (The Spiritual Plan for Aztlan): “In the spirit of a new people that is conscious not only of its proud historical heritage but also of the brutal gringo invasion of our territories, we, the Chicano inhabitants and civilizers of the northern land of Aztlan from whence came our forefathers, reclaiming the land of their birth and consecrating the determination of our people of the sun, declare that the call of our blood is our power, our responsibility, and our inevitable destiny. … Aztlan belongs to those who plant the seeds, water the fields, and gather the crops and not to the foreign Europeans. … We are a bronze people with a bronze culture. Before the world, before all of North America, before all our brothers in the bronze continent, we are a nation, we are a union of free pueblos, we are Aztlan. For La Raza todo. Fuera de La Raza nada. Chicano is our identity; it defines who we are as people. It rejects the notion that we…should assimilate into the Anglo-American melting pot…Aztlan was the legendary homeland of the Aztecas … It became synonymous with the vast territories of the Southwest, brutally stolen from a Mexican people marginalized and betrayed by the hostile custodians of the Manifest Destiny.” (Statement on University of Oregon MEChA Website, Jan. 3, 2006). Miguel Perez of the Cal State-Northridge’s MEChA chapter stated: “The ultimate ideology is the liberation of Aztlan. Communism would be closest[to it]. Once Aztlan is established, ethnic cleansing would commence: Non-Chicanos would have to be expelled — opposition groups would be quashed because you have to keep power.”

The National Council of La Raza and its allies in public office make no repudiation of the radical MEChA and its positions. As recently as 2003, La Raza was actively funding MEChA, according to federal tax records. However, since La Raza began to receive federal funds, La Raza has adopted a less militant stand, at least publicly, where they say that they no longer support Reconquista de Aztlan. However, when one examines where proposed federal money was designed to go, under S. 744, and to go in the pockets of La Raza and MEChA, it is impossible to believe that at its core, La Raza does not truly support the concept of Aztlan. This is where Atzlan started.

Will the Oklahoma Supreme Court ruling set into motion more actions? A good case can be made as evidenced by the following 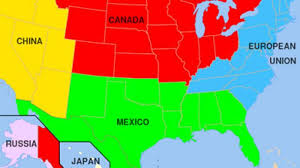 The above map is the UN plan to divide America in the event of a World III gone bad for the United States in which America is carved up like the proverbial Thanksgiving turkey.

All three states on the Pacific coast voted for Hillary Clinton. The election of Donald Trump has spurred discussion about all three states leaving the United States and being annexed by, believe it or not, Canada. From the Seattle Times: I have saved the best for last with regard to tomorrow's article. At the center of this movement of withdrawing from the union comes the resurgence of an old movement and the genesis of this death blow to the United States already resides in a proposed bill in the California Legislature and that will be the topic of tomorrow's article which will serve as a part two for this concept of how America is going to be destroyed by seccession.