The nation was shocked to learn that 18 marines, stationed at Camp Pendleton, who were involved in border security, have been arrested for facilitating transnational child sex trafficking.

...The troops were suspected of involvement in the smuggling of undocumented immigrants into the United States from Mexico and various unspecified drug-related offenses....  two Marines arrested July 3 on charges of transporting aliens for financial gain were arrested by U.S. Border Patrol agents several miles north of the border along a highway in San Diego County, which makes for a total of 18 US Marines arrested for suspected human trafficking and /or drug offenses. (Editor's Note: In other words, these 18 Marine "gangsters" were working for the cartels).

Surprised? Why should America be surprised? The Democratic Party has forsaken its once mainstay base of inner-city residents in favor of representing the illegal immigrants that are flooding into our country. Leaving out the decent human beings that illegally cross our border, we are witnessing drug dealers, child-sex-traffickers, hard core terrorists, the hit men from MS-13, ISIS, etc., crossing our border in force.

Mexican governmental, narco-terrorist state-based corruption has entered our country and has been influencing our politics for a decade or longer. Perhaps many readers missed my many stories on what is happening in places like Humboldt County and Chinatown, CA. The CSS is providing another opportunity for people to get used to the idea that the cartels and terrorists, essentially the same organization, are beginning to infiltrate our courts, law enforcement and yes, Congress! The infiltration has been inside of our military for years. Soon, I will be coming out with zingers along these lines. As a teaser, I will offer up the fact that Chuck Schumer actively supports the radical group, La Raza. So, I ask you America, should you be surprised at the boldness of the claims made in this article? The coffee is brewing, but America has failed to wake up and smell the cesspool that this country is becoming.

The Old News of Gang Infiltration Into the US Military

A 2011 FBI report stated that every branch of the military has been infiltrated by gang members. This report was originally covered iby Business Insider. However, what this MSM organization did not tell its readers, back in 2011, that the Sinaloas, the Juarez Cartel, and even ISIS personnel have been able to join the military in exchange for a chance at citizenship.

In 2012, I obtained a story from Stars and Stripes. It detailed very disturbing claims that gangs had infiltrated every branch of the military. However, I can no longer provide a link as the reader would receive a 404 error code. In other words, the military scrubbed this story. One can only speculate as to why. However, I found another FBI report from 2011 that confirms what is written below:

Through transfers and deployments, military-affiliated gang members expand their culture and operations to new regions nationwide and worldwide, undermining security and law enforcement efforts to combat crime. Gang members with military training pose a unique threat to law enforcement personnel because of their distinctive weapons and combat training skills and their ability to transfer these skills to fellow gang members.

Many street gang members join the military to escape the gang lifestyle or as an alternative to incarceration, but often revert back to their gang associations once they encounter other gang members in the military.Other gangs target the U.S. military and defense systems to expand their territory, facilitate criminal activity such as weapons and drug trafficking, or to receive weapons and combat training that they may transfer back to their gang.Incidents of weapons theft and trafficking may have a negative impact on public safety or pose a threat to law enforcement officials.

The following picture depicts a US soldier in a war zone flashing gang signs.  A picture is worth a thousand words. 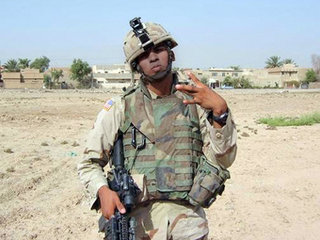 The Latest Infiltration of the Military by Cartels/Terrorists

A military investigation into human trafficking, last Thursday, resulted in the arrest of 16 US Marines, adding to the two that were arrested in an earlier sting. The arrests would be related to the arrest of two Marines, a few weeks ago, by a Border Patrol agent, they were close to the limits with Mexico. I think it is clear that the Marine leadership was "forced" into investigating its own because of the earlier arrest of the two rogue marines by the Border Patrol. Otherwise, it appears to this reporter, that the status quo of "business as usual" would have continued. How high up does this corruption go? Nobody is saying, but an operation this large was not carried out by privates and corporals.

It's Not Just the Military That Have Been Infiltrated

Instead of arresting these illegal immigrants, videotaped below, instead the two Border Patrol agents are caught on TV footage, from KOLD News 13 promo video feed showing these agents facilitating a felony in progress. Personally, I have no problem with the agents helping these people up the hill or even providing them food and water. Then these people should have been arrested and held for deportation or enactment of legitimate asylum claims, most of which are based upon fraud.  (Click on the black video space to being playing this footage).

CRISIS ON THE BORDER: @acarrillonews travels to the El Paso Sector to speak with agents & migrants about the record number of asylum seekers & what Tucson is doing to help tonight at 10 on KOLD. #border #immigration #elpaso

The actions of these Border Patrol agents seem to be saying..."Welcome to America....we are so nice that we won't even search for weapons or drugs...or anything else"

My Border Patrol sources have long told me that there is a strong Deep State influence inside of the organization. They have also told me that rogue, Deep-State serving agents are linked to some military who are making a profit for the transport of illegal aliens inside of the country. Some of the illegal aliens are carrying large amounts of drugs.

Additionally, I have a Department of Homeland Security source who has said to me on more than one occasion "We know where the child-sex-trafficking factories are, we know where the terrorist camps are...but we are not allowed to do anything about it...Anyone who is GS-15 and above cannot be trusted..." I would add that these referenced rogue DHS agents are usually Obama era hires

Please allow me to remind the readers of the work of Trevor Louden who identified 80 Democratic Congressmen who were members of front groups for either the American Communist Party and/or the Muslim Brotherhood (ie the largest terrorist organization in the world). This claim has been backed up by several former Congressmen, including Cynthia McKinney.

Every federal agency, every head of the CIA, and many top military leaders who were appointed by Obama to replace the 400 command officers fired by Obama for being too nationalistic, are undermining this country. This country is a full-scale civil war. Right now, casualties are at a minimum. but that will soon change.

Thanks to Marilyn Rupar who contributed to this article.

I have it from a good source these Marines as well as six Navy Seals also were set to smuggle in an ISIS Sniper to take out Trump. When this was found out Vice Admiral William Moran was relieved of duty as Secretary of Defense the Marines were arrested and the Seals brought home. Our friends the Russians, captured the sniper and turned him over to loyal members of the FBI. This is the second time US Marines have been set into position to take out Trump. Sad very sad.

Doesn't shock me at all

What I do find disturbing is the low hanging fruits that they usually pinning this stuff on. The real culprits that likely authorized this action are purposely going to be left alone. IMHO. The real pedophilia (not people with "pictures" that don't meet the government photo registration law or what I call "fake pediophelia") players are left alone. The dumbed down public will believe that the issue is addressed. Just like the "Mockingbird" investigations of the 70's failed to do anything other than to placate a really dumbed down public. The script never changes.

POLICE GANGS and the MILITARY

SO the military are in on drug running and kidnapping of children,and everyones Hero's are protecting them,WHEN the LORD told me SATAN was at his house crying on his shoulder,I almost fell out of my chair,I couldn't believe it,I asked him,I THOUGHT YOU KICKED HIM OUT OF HEAVEN,HE told me ,NO NOT YET,I asked HIM what did Satan want,HE said, HELL ISN'T BIG ENOUGH TO HANDLE ALL THE AMERICANS I"am SENDING TO HELL,and SATAN wanted to double its size,I said what did you tell him,OUR LORD GAVE SATAN PERMISSION TO DOUBLE THE SIZE OF HELL,just so no americans would miss their chance to be sent there..and they will,90% of the women,and 95% of the men.There won't be many americans at the wedding of the LAMB.....