In what will prove to be the most bold proclamation in the history of the CSS, it can be stated, without hesitation, that Canada is serving as a base of operations for hostile CHICOM military and economic  operations. One day, the CHICOM troops that are being housed in British Colombia will come streaming across of our border as Chinese invasion of America will emanate on both our northern and southern borders. This is a story about the insecurity of America's northern border.

Two of the most popular ways to "take over" a country is to militarily invade and/or to dominate the economy of one's advesary.

Today, the CHICOM influence in Canada is a direct attack upon the economy of the United States.

The CHICOM invasion of the United States has already begun and it has begun on two fronts:

1. Embedded Chinese soldiers on American soil which are concealed in locations such as inland ports. It is also clear that the CHICOMS are economically invading the United States as well as replacing US economic spheres of influence. The CHICOMS have also increased their military presence in British Colombia. Further, the CHICOMS are also establishing a ham communications network in the US through established communications channels. These items constitute a monumental national security threat.

2. The CHICOMS have already invaded several American towns and counties, such as Mohave County, AZ., with their "belt and road" initiative.  In researching unreasonable and unconstitutional mask mandates, the CSS discovered a strong CHICOM influence in Mohave (AZ) County and San Bernadino (CA) County. It strongly appears that belt and road initiative is being employed in several locations inside the United States. This constitutes a CHICOM economic invasion and will be covered in future articles.

This site is written in Chinese and there is no location listed on the map which is required. Additionaly, the cheap and inexpensive cell phones used for Lifeline, contains software which is exlusively Chinese.

The following was obtained from American Legion Post 408
http://www.al408.com/alarc

This is a covert registration system for covert and embedded CHICOM forces already in this country and they are using ham radio protocols to register and as such, allowing these embedded Communist Chinese forces to communicate on American airwaves. This is a necessary communications prerequisite for an invasion.

Last year, California Governor, Gavin Newsom, allowed the removal of repeaters in Northern California. This would cripple local defense that would be LEO orientated. Again, this now makes a great deal of sense and is an unquestionable prelude to invasion.

The Chinese have established a military boot camp on a British Colombia Island. The forces even include CHICOM females. This leaves open the possiblity of a fifth column infiltration into the United States in which Chinese females would be not be viewed in the same light as Chinese males in large groups. One has to wonder if this indicates the intent to destroy infrastructure, communications, etc in preparations? This is in addition to the previously reported CHICOM combat troops in British Colombia

From information obtained from two sources, it can now be said that the CHICOMS are using their econmic presence in North America (ie British Colombia) to replace America's sphere of economic power and dominance and our supposed allies in Canada are helping to facilitate this major betrayal of trust.

The "North American World Commodity Exchange Center • Canada-China Trade City" project is the first foreign "Shanggu International Brand" project in which the business model of "World Business Valley Overseas Chinese Businessmen's Dream" is deployed in the world. The investment and construction of the Canada-China Trade City project aims to implement the "Belt and Road" cooperation initiative, develop "global market integration", drive local employment in BC, and promote the joint sales of Canadian products in China and countries along the "Belt and Road". Give full play to the advantages of Canada-China trade and revitalize the economic and social prosperity of Canada and China.

The massive $190 million, 470,000-square-foot complex, dubbed the “World Commodity Trade Center,” is a joint venture between a Chinese state-sponsored company and a local development firm. The centre, first conceived in Beijing, has four warehouses and two large exhibition halls — to be lined with Chinese and Canadian flags — strategically located in the Campbell Heights industrial zone between Vancouver International Airport and the United States border.

Ground broke on the facility on October 7, 2018, with China’s consul general Xiaoling Tong taking centre stage, flanked by local politicians, development partners and associates of the United Front Work Department, a Chinese Communist Party (CCP) agency that political analysts say promotes China’s interests among Chinese diasporas, often by persuadinglocal Chinese organizations that may be sanctioned or supported by the department itself.

Look at the range of economic influence that our so-called Canadian friends are allowing: 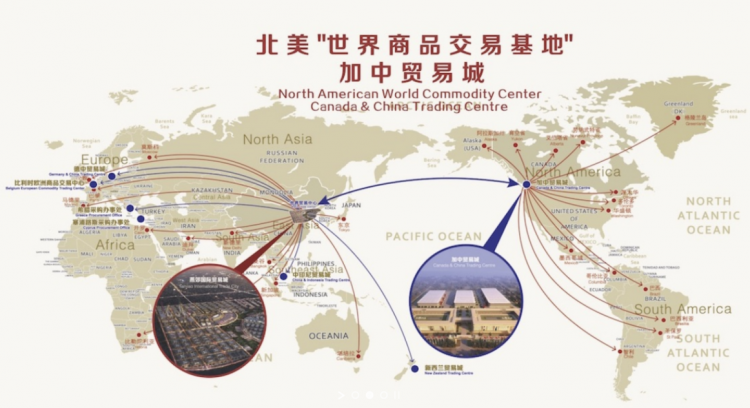 The Yanjiao International Trade City diagram shows the Beijing-area import-export "mother centre" and the foreign hub cities, including Surrey, B.C. that will service it. Photo by World Commerce Valley, nacvglobal.com  Published under Fair Use

The international influence from this Canadian-baed CHICOM economic endeavor is enormous and also constitutes a major threat to the United States. If I were Trump, I would tariff all Candian products coming into the United States. The most shocking discoverey made by the CSS lies in the fact that CHICOMs are underwriting infrastructure projects with local governments by using American based corporations. To those that would like to minimize these multiple threats posed by China, I would like to point out that two weeks ago, Secretary of State, Mike Pompeo, warned local governments of predatory Chinese practices that would come to their communities. And come they have to places like Kingman, AZ., and San Bernadino (CA). And this will be the topic of the next article.

I love in Michigan and it ain't these chicoms you speak of taking over and ruling. It's Israelis here in Michigan. How come none of you guys ever mention them and their hostile takeover of this nation?

They are minimal in…

In reply to Chicoms by amy durance

They are minimal in appearance. Basically because they don't need to invade like the Chinese would. Israelis and their extensions are in the best possible position: they simply control the "americans" (lower case deliberate) in charge, and the organizations, and the media, and have done so for more than a century.

Hi Dave there is a post on beforeitsnews. About large Chicom troops in Canada marching on the streets also there are tanks and U.N. Vehicles can't post YouTube taken down .also fyi hearing that China is now building bases in the Caribbean islands? They already took over Greenland .

it will not last forever! He will have a purpose, and HIS PURPOSE WILL BE COMPLETED, but then all the prophesies about the demise of the USA WILL HAPPEN! ALL THE PROPHESIES ABOUT THE NWO WILL HAPPEN, ALL THE PROPHESIES ABOUT MARTYRS WILL HAPPEN! THE END OF THIS AGE WILL HAPPEN! THE NEW HEAVENS AND NEW EARTH WILL HAPPEN! AND ALSO WHAT WILL HAPPEN WILL ALL THE UNBELIEVERS, ESPECIALLY THOSE WHO ARE SO DETERMINED TO SERVE LUCIFER WILL GO TO THEIR GREAT REWARD WITH HIM AND WILL HAVE THE OPPORTUNITY TO REMEMBER EVERY SINGLE WICKED AND EVIL AND DISHONEST THING THEY EVERY DID ~ THEY WILL RELIVE IT FOR ETERNITY! SELAH! Whereas, in Christ our sins will be remembered no more as they are covered by the perfect sinless blood of Jesus!

YOUR HERO'S ARE IN BED WITH CHINA

MY son was in a bar in anacortes,washington,A GROUP of canadian military came in,soon they were drunk,THEN they started telling all the men in the bar they would be coming with their chinese friends and they were going to KILL every american man,woman and child they could find,WAS THERE A FIGHT,no the homos in the bar laughed and let them walk away,AMERICA HAS BEEN DEFEATED with out a shot being fired,BY YOUR HERO"S IN BLUE,BROWN and BLACK (aka) YOUR POLICE GANGS..HAL TURNER hit the nail on the head today,IT'LL be the worse slaughter in history...

This is insane!! How can Canada just blatantly open the back door to America when we just signed a historic trade deal with them !!! Back stabbers!! All the hard work we have done to rein China in is now lost! Gone! And how is this not front page news??? How can we just now be hearing this about Canada? Wow! So now China just moves in to Canada lock stock and barrel and no one says a word. Except for Dave Hodges thank you Dave ! Without you we’d never hear anything. This is just insane. It is sooo big and so planned and massive it’s hard to wrap my head around it. This country is doomed if they don’t WAKE UP!!

If my Dream vision is right Russia will invade Alaska and then use the rail lines to transfer through Canada into the USA. Canada will deploy troops and LEO on every rail crossing to try to make it look like their resisting atleast a Russian takeover of Canada and to make sure the trains don't stop on Canadian soil. It will be a joint ops on the West Coast.

John, I find your dream interesting. Do you have a a prediction on what the time frame is on this?