Churches Across US Build Tiny-Home Villages Amid Worsening Affordability Crisis

On vacant plots near their parking lots and steepled sanctuaries, congregations are building everything from fixed and fully contained micro homes to petite, moveable cabins, and several other styles of small-footprint dwellings in between.

Church leaders are not just trying to be more neighborly. The drive to provide shelter is rooted in their beliefs — they must care for the vulnerable, especially those without homes. -AP

More than half a million Americans were homeless in 2020, and the number has likely climbed as shelter costs if renting or owning have exploded, triggering the worst ever housing affordability crisis on record. As we've previously noted, soaring shelter costs force people into homelessness.

Days ago, we outlined how a tidal wave of evictions could be ahead with 8.4 million Americans, or about 15% of all renters, behind rent payments. Of that, 3.5 million said they could be evicted within the next two months. Unlike the pandemic, the federal eviction moratorium prevented people from ending up on the streets, though the moratorium has since expired during the worst inflation storm in four decades.

Jeff O'Rourke, lead pastor of Mosaic Christian Community in St. Paul, Minnesota, embraced tiny homes as a housing solution. He said his church uses "every square inch of property that we have to be hospitable." (see image above) 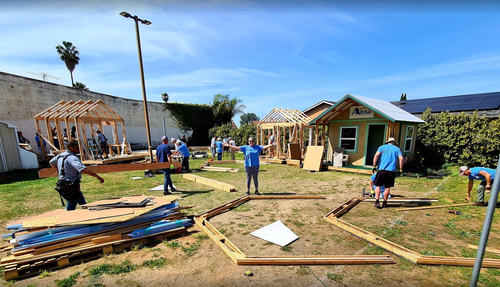