Recently, Doug Thornton, former Marine and DHS agent, and myself were discussing some recent TV shows with regard to the concept of what is commonly called, predictive programming. The discussion was so interesting, we decided to to a show on the topic and we covered a variety of shows and discussed their obvious message to thepublic.

Predictive programming is based upon the belief that the globalist, who control the media are communicating a message about what is coming. The concept is based upon mass desensitization so that when the real and shocking event does happen, the public has already been conditioned for what is happening and the globalist controlled media will have an easier time imposing their will on the public. There is some speculation among many that the concept of predictive programming is the fulfillment of a spiritual requirement and committment on the part of those who would enslave humanity, in that they must, in some form, disclose what is coming. In other words, the Satanic ones must tell us, in some form, what is coming, hence the use of the concept--- Predictive Programming.

The intereview can be heard by clicking this link. Tell us what you think in the comments section....as we covered the Walking Dead, the Last Ship, Star Trek, Designated Survivor, Colony, and many other programs.

Doug Thornton has a new show on Global Star Radio Network and the archives, for his new and popular show, American Vindicta, can be accessed here. Pay close attention to Doug's new show as there are very few broadcasters with his experience or credentials who are broadcasting today.

There is a show presently in rerun on Netflix that I believe shows us our collective futures. The parallel between this show's plot and its similarities between the martial law and continuity of government documents is stunning. And in my bones, I feel that this production is much more than just another TV show. In a dystopian, not too distant future LA, a couple, Katie and Will Bowman live with two of their three children under a military/martial law regime which is the most brutal martial law military occupation by an organizatio

An ET force called the  "Hosts", successfully invaded the Earth. The ET's are NOT part of the show and should not even be in the story line for all intents and purposes. The show focuses on human collaborating forces of enslavement. It is said of them that "no one ever sees them (ET's)". The Hosts have built an enormous wall, around 30 stories tall, several meters thick, and many miles in length, which surrounds the central part of Los Angeles, where the series is set. No travel is permitted between the regions of the world, called blocs, and this is one of themes of any martial law regime, real or of Hollywood origin. 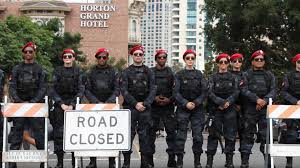 The geographical extent of the alien invasion is unclear, but it is presumably worldwide. The occupying forces shown to the viewers are all human and enforce their occupation via black-and-red-uniformed militarized police, nicknamed the "Red Hats" and they are armed with automatic weapons and travel in DHS style armored personnel carriers. The Red Hats are today's George-serving Soros' Antifa and members of the Democratic Party.

These Red Hats, along with a privileged class of elites, called the "Proxies", the global elite of today, were all drawn by the Hosts from the local population, and are thus denigrated by some of those they control as "Collaborators". It is unclear how the Red hats were initially organized or equipped. They may be staffed by members of what was the Department of Homeland Security and/or FEMA.

The variables, which are a part of the show and make up the nature of the extreme martial law that we see in the show and are part of our growing level of enslavement. The following elements of this show, should quickly get your attention. This is the best in predictive programming.

The National ID Card is set to be required as a prerequisite for travel. I am told that the new ID cards will look for anything to prevent travel on public transportation. This is precisely what the Communist Chinese are doing under the direction of Google;s technology and it is being implemented here in America.

We certainly have not seen this carried out in the present. However, I detailed how Jade Helm 16 practiced this very scenario.

Every intersection is becoming a data gathering point. The car is recorded along with the facial recognition software being used to identify the car’s driver and occupants. This is a work in progress.

Have you been paying attention to the campaign positions of key Democratic figures such as Elizabeth Warren, Kamala Harris and Corey Booker who all promise to eliminate the private ownership of cars? It is called Agenda 2030 and it being implemented right under Trump's nose.

I reported several weeks ago, according to a Federal official, that makeshift FEMA camps are being constructed outside of Dallas, Houston, San Antonio and Austin. If they are for the massive hordes of illegal aliens, why are the illegal aliens being sent inland to several American cities?

This one is easy. Just say CNN, MSNBC, CNBC, ABC, CBS, NBC and all social media monopolies that Trump refuses to do anything about.

7-Selective eugenics-  medical conditions (eg diabetes) are not deemed worthy of treatment by the hosts and people waste away as they often die very agonizing deaths.

Simple question in response to this: How many states are attempting to pass genocidal euthanasia for the ill and how many more states are allowing extreme late term abortions?

Representative Omar has been outraged over America’s use of drones to “kill civilians” in our foreign wars of occupation. Are they merely practicing for us?

There are no known cases that I am aware of. However, why would the government pass the NDAA, which allows exactly this to happen, if they one day were not going to act upon the illegitimate authority behind this law?

This is called using food as a weapon. What do people think is going to happen with the extreme weather that has destroyed farming in the Midwest. And, God forbid, the Oroville Dam breaks, the entire agricultural rich Central Valley region of California will be rendered useless. Can you say famine and do you want to eat? Then come to our camp.

We already know that when martial law is implemented, the Internet and cell phone use will be taken away.

We are all being profiled every second of every day. What could they possibly be profiling us for? Look at #`13 for the answer.

13-In season 2, it was revealed that each bloc is not a slave labor colony, but eventually all humans will be made extinct (ie depopulation). The series begins less than a year after the beginning of the Occupation. Life is a living hell. The implied, but never overtly stated is that "resistance is futile" and always fatal to those who resist as well as to their family members.

Subsequent seasons covered the shedding phenomenon from the vaccines,  a planned famine and a Red Dawn invasion. Who says you cannot learn  a lot from a TV show?

This is the end of humanity and the ushering in of transhumanism. This is where entertainment meets the future. It is called predictive programming.

Introducing Life-Saving Alerts to your Sat Phone, the phone that can never be taken down!

Galileyo is a new Information Distribution Platform that gathers uncensored information from our proprietary global information sources and delivers that information to you, regardless of the situation on the ground, via global Satellite Phone Networks.

To Get Breaking News From Dave Hodges, Steve Quayle, Mike Adams and Others......

Galileyo utilizes global satellite phone networks that cannot be taken down unlike your cell phone.

I strongly encourage you to sign up for the Sat Phone and then subscribe to the alerts from our team of experts. By the way, I pay 25% the cost for my Sat Phone than I do for my cell phone.