EMPTY SHELVES: The Deliberate and Now Inevitable Food Shortage Holocaust Is Upon Us

It's Christmas in October or so the retailers are saying. If one wants to celebrate the traditional gift exchanges that come with the Christmas season, one better complete their shopping this month, or their holiday celebration will be limited to gathering near the family Christmas tree, provided that the Green New Deal hasn't taken over the grid.

As bad as the Christmas retail season appears to be, it pales in comparison to what is happening to the food supply, both domestically and internationally.

The U.S. Department of Labor reports that in the past 12 months since July 2020, the consumer price index has increased 5.4%, including a 2.6% in food at home prices. Meat, poultry, fish and eggs cost 5.9% more than they did last July, and meals prepared outside of the home are 4.6% more expensive. The immediate predictions are that the shortages that we are now witnessing will pale in comparison to what is coming. No amount of "shrinkflation" will mitigate the coming disaster related to the food supply.

The Predatory United Nations Is Licking Their Chops

The United Nations is salivating as the seriousness of the emerging calamity as they see an opportunity to send their "peacekeeping troops to every country under the guise of humanitarianism when in fact this will end up being putting most of the nations on the planet in a state of de facto martial law! Out of chaos comes order, the New World Order!

Some may doubt the accuracy of this prognostication. However, these same same "Doubting Thomas' may be well-advised that the UN will soon be coming to a neighborhood near you as I am receiving multiple reports of UN (supposed medical) vehicles arriving Down Under. One can safely bet that many of these "humanitarian troops" will include Communist Chinese soldiers. All of this is being done in a nation that locked down its nation based on 9 alleged deaths of Covid-19. Of course this nation, several years ago, gave up their guns. Watch Australia, it is coming here and this won't a case of next year's trend. It is happening now...

...Likewise, David Beasley, Executive Director of the World Food Programme (WFP), warned of alarming global hunger and food insecurity, with the number of people “marching towards starvation” spiking from 135 million to 270 million as the pandemic unfolded.  He stressed that 2021 will be catastrophic.  “Famine is literally on the horizon and we are talking about the next few months,” he said.  Noting how the WFP stepped in to deliver aid when the global airline industry shut down at the start of the pandemic, he warned anew that 2021 risks becoming the worst humanitarian crisis year since the founding of the United Nations, “and we will have to step up”...

CBS News took an interest in the UN's prognostication of a famine of "Biblical" proportions..

...The World Food Program, which works to fight hunger worldwide, serves nearly 100 million people a day, including 30 million who depend on the organization to stay alive, according to Beasley. He said that every night, 821 million people go to bed hungry.

Some 135 million people are acutely food-insecure and facing crisis levels of hunger or worse, according to a report published this week called the 2020 Global Report on Food Crisis. Now, the coronavirus could push an additional 130 million people "to the brink of starvation"...

To some degree that is true, but that window of opportunity to sidestep the emerging crisis is closing. Look at what is happening to some of the major players in the industry:

We want you to know that OUR PRODUCTION AND FULFILLMENT CONTINUES.  While we are current, we ask that you understand we still experience occasional product lapses and shipping delays. We are proud that you have chosen NuManna as your source for storable food.......especially proud that you make us your choice in these uncertain times.

From Mountain House Regarding Delivery Issues to Customers

PLEASE EXPECT DELAYS IN TRANSIT DUE TO NATIONWIDE CARRIER DISRUPTIONS

The  food company Augason Farms just issued a letter to its suppliers, declaring it will “suspend business for the next 90 days, effective immediately,” stating, “[Augason Farms] cannot fulfill your orders on time.”

The company is having critical supply chain failures combined with extraordinary demand. This is happening across multiple supply chains. 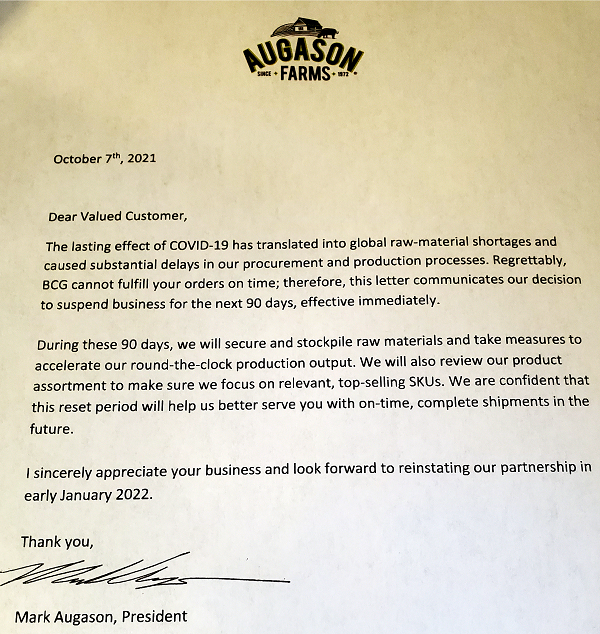 My Patriot Supply still has storeable food and the prices have not yet hyper-inflated. However, it is unlikely that any company is going to escape the ravages of the damage done by the Biden Administration for much longer!

There is one missing item from Clampet's list, a way to defend your supplies when all hell breaks loose!

As good as the above-mentioned suggestions may be, they are only stop-gap measures. Biden partially sealed America's fate by making us dependent on unreliavle foreigh oil imports and this created a break in the supply chain, among other factors. Further, the Democrats stimulus payments (ie the Fabian Socialist Universal Basic Income) contributed to workers staying off of the job long after the lockdowns were rescinded in most areas. The labor shortage, artificially created, is contributing to the ships that cannot offload. And even if they could offload, one unnamed source from the trucking industry, and a food supplier told me that by the end of October, the nation will experience an acute shortage of 60,000-70,000 truckers. When this happens the "just-in-time" deliveries will slow down and eventually stop and the shelves will be empty and predatory violence will begin in earnest.

Soon, every day in America, and across the planet, will be like the final day at the stores before the arrival of Hurricane Harvey in which it took one day to empty out the store supplies in Houston. When this happens, where will you turn? Do you really think that this administration is capable of meeting the food needs of an entire natiom? After this administration left over a thousand Americans behind enemy lines in Afghanistan, do you even trust that they will try and meet your needs? Ask yourself a question America: When have you ever seen communists engage in humanitarian efforts? Make no mistake about it, we just went through a Bolshevik Communist takeover of America following the stolen election of 2020. No administration could be this incompetent. We are witnessing the UN/CHICOM-inspired takedown of America and the rest of the planet.

You have the shortest window in which to gather as much life-saving supplies as you can. We are probably looking at the latest October surprise....who needs FEMA camps when one controls the food? I talked to one person who said he was maxing out his credit cards because who's going to send the collection industry in a society that is in absolute chaos?

Finally, if one doubts the gravity of this situation, I would suggest reading a history book about Stalin and Ukraine's Holodomor. Yes, this is deliberate!

Food, water, guns, ammo, natural medicine and tools are your barest of essentials. How much do you need? In recent interviews of two experts on the CSS, both Robert Griswold and Daisy Luther stated "2 years worth and seeds." The old saying "be quick, or be dead" comes to mind.

Doesn't the Book of Revelations say something about plagues and famines...and this is just the beginning. Are we in the tribulation, nobody can say for sure. Certainly, nobody can say we are not!