Today we call for the arrest and criminal prosecution of the scientists at Boston University who have apparently violated US law and engaged in dangerous gain-of-function research to create a chimeric covid “superstrain” that achieves an 80% kill rate in mice. This bombshell news was broken by the UK Daily Mail in an exclusive story that documents how Boston University scientists combined a spike protein from the Omicron strain with the “original Wuhan Covid strain” to create a new super strain that kills 80% of mice upon exposure.

“The revelation exposes how dangerous virus manipulation research continues to go on even in the US, despite fears similar practices may have started the pandemic,” writes the UK Daily Mail, which also quotes two experts warning of the potentially devastating consequences if this strain is “accidentally” (on purpose) released onto the world:

Professor Shmuel Shapira, a leading scientist in the Israeli Government, said: ‘This should be totally forbidden, it’s playing with fire.’

Dr Richard Ebright, a chemist at Rutgers University in New Brunswick, New Jersey, told DailyMail.com that: ‘The research is a clear example of gain of function research.’

He added: ‘If we are to avoid a next lab-generated pandemic, it is imperative that oversight of enhanced potential pandemic pathogen research be strengthened.’

The effects of the new chimeric super strain include “severe disease” in exposed mice, followed by a “mortality rate of 80 percent,” reports the UK Daily Mail. 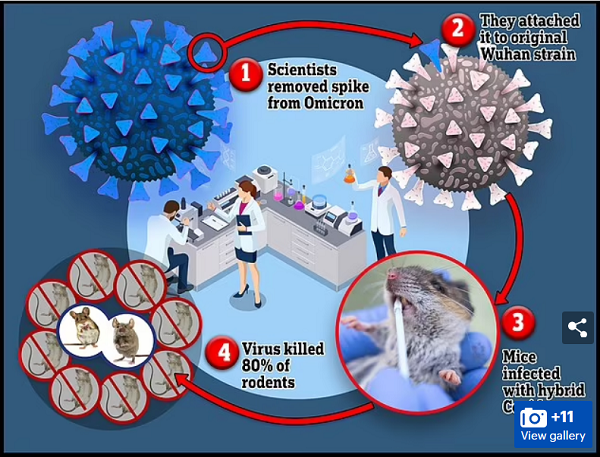 Image via the UK Daily Mail, link above

The organizations involved in this research — all of which should be immediately investigated for criminal violations of gain-of-function research prohibitions in the United States — include:

Take note of all the organizations and individuals involved in this dangerous research, for if this chimeric, deadly bioweapon escapes their hold, this time the U.S. won’t be able to blame China. It’s home-grown biological terrorism this time.

If you build it, it will leak

Boston University is one of over a dozen BSL-4 laboratories in the United States, most of which have suffered lapses in viral containment at one time or another. As humanity has learned the hard way with covid and SARS-CoV-2, if you build it, it will leak. Thus, the very construction of these dangerous pathogens is equivalent to “suicide via science” for the human race.

After the leak of SARS-CoV-2 from the Wuhan lab in China, the entire corporate media lied about its origins, helping to cover up the fact that mad scientists unleashed a global pandemic that resulted in an extreme overreaction by national leaders who shut down local economies, causing widespread economic damage and supply chain collapse. Now, thanks to the lying corporate media and the arrogant, insane practices of virology “science,” they are practically begging for another pandemic to further destroy human civilization.

It’s almost as if Boston University has a death wish for all of humanity. Did they learn nothing from the covid catastrophe? Just because you can play God with the morphology of pathogens doesn’t mean you should. But modern scientists have abandoned all remaining ties to ethics, morality or safety and appear to be rushing head first into self-induced annihilation.

Is this all a cover story for the next pathogen release that will threaten humanity?

Informed observers will note that this information coming out about Boston University may have been deliberately publicized in order to create a narrative for the next pathogen release that threatens humanity. With this deadly super strain now known to exist, the powers that be can simply arrange for a “theft” of the pathogen by so-called “terrorist groups” (which they might designate as conservatives, Christians, anti-vaxxers, etc.) and the subsequent release of this pathogen across US cities. (Perhaps an aerosol release via drones…)

Almost instantly, the United States would be thrust into another “great emergency” that would justify another round of money printing, government surveillance, quarantines, economic lockdowns, food supply destruction and everything else that helps the globalists achieve human depopulation and economic collapse. The pathogen doesn’t even have to be a virus. It could simply be a chemical weapon sprayed into the skies above cities, and all the toxic effects would be reported by the media as proof of another viral outbreak.

It’s absurd to think that this gain of function research was taking place in Boston without national authorities knowing about it and approving it. In fact, this research was funded by Fauci’s NIAID, under the NIH, thus proving that it was being carried out with the approval of the federal government. As the research paper openly admits:

Thus, Anthony Fauci is still funding illegal gain-of-function research to develop new bioweapons. It is astonishing — and beyond inexcusable — that this is still happening two years after the release of SARS-CoV-2 into the wild. There can be no scientific justification for such insane acts that risk the lives of billions of human beings. It’s as if these scientists are part of a suicide cult targeting humanity for extermination. And it’s all being carried out with taxpayer money.

Germany’s hospitals are about to collapse

On top of the bioweapons insanity being unleashed in Boston, Germany’s hospitals are on the verge of collapse due to rising energy costs and a supply chain collapse of medical supplies. As German Health Minister Karl Lauterbach recently claimed, hospitals are going broke and will have to start shutting down soon. In his own words, “the hospitals will face a very drastic liquidity problem in the next few months.”

Perhaps Germany should have thought about this before declaring economic war against Russia and shutting down their own fossil fuel infrastructure in order to appease the virtual signaling rantings of a teenage girl named “Greta.”

This news comes on the heels of the British Medical Association (BMA) declaring a week ago that the NHS was on the verge of “complete collapse” following news that 44 percent of NHS doctors planned to quit or leave UK hospitals.

So now we are watching both the UK health care system and the German health care system crumble. (And it’s not even winter yet.) It begs the obvious question: How will European nations treat all their wounded soldiers when World War III reaches their own borders? How will they treat the casualties of the increasingly likely nuclear bomb strikes that will target cities like London and Berlin?

As winter gets under way, another question emerges: How will these nations treat their own citizens who are dying from exposure to freezing weather due to lack of energy for heat? With hospitals collapsing, food growing scarce and energy running out, Western Europe descends into a third world existence. The deindustrialization of Europe — stemming from the lack of energy that was engineered on purpose — only adds to the accelerating demise of the continent, leaving us to wonder if Western Europe will never recover from the insanity of its own anti-energy, anti-human policies that have brought it to the brink of self-annihilation.

Book of Revelation coming to…

Book of Revelation coming to life. This should Not surprise any true spirit-filled believer. Weaponized pestilences will bombard this Earth from here on out. The Four Horsemen are riding now. Famine. War. Pestilence. Death. People make your choice: God or Satan. There's no position of neutrality. No choice is Satan's camp.

Follow the money trail; it will be Gates, Soros and Fauci all over again! Boston's getting it somewhere!