The time has come for President Trump to invoke the Insurrection Act and put down the lawless, left-wing insurrection against America

The lunatic, lawless Left is out of control. The corporate-run media has become a CIA propaganda front that ignores reality while fabricating fake stories to destroy America. The tech giants despise free speech for conservatives while demanding “equality” for transgenders. And left-wing governors and mayors are openly advocating Antifa-style lawlessness and violence in America, as long as that violence is directed at conservatives and Trump supporters.

(By the way, do you remember all the hype to push “Net Neutrality?” It was supposed to protect dissenting voices and diverse views on the ‘net. The tech giants pushed it aggressively, and the moment Trump got elected, those same evil tech companies like Google and Facebook then systematically silenced all conservative voices. The entire “Net Neutrality” push was a con job. They never believed in neutrality; only tyranny.)

Left-wing rioters attacked supporters of President Donald Trump leaving a rally in Minneapolis, Minnesota on Thursday evening — assaulting them in groups, setting fire to pro-Trump hats, and attacking the police.

It is not safe in Minneapolis any longer for Trump supporters. Please stay away from the vicinity and do not come out with branded gear 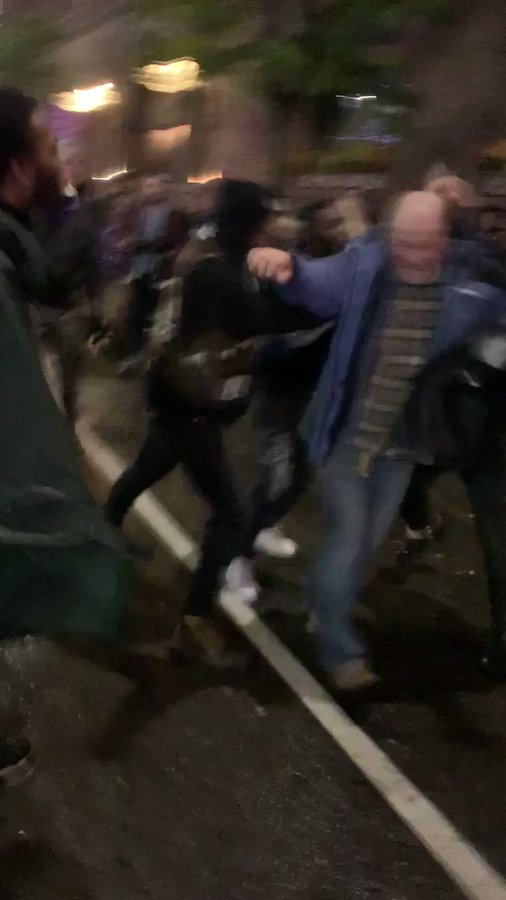 16.8K people are talking about this

Local Minneapolis Star-Tribune reporter Liz Sawyer noted there were several hundred rioters, and that some were singling out Trump supporters and surrounding them in groups before attacking them. Some also attacked police…

Arrests have been made. Antifa is present. Violence is common place at this point. Typical end of the night anarchy 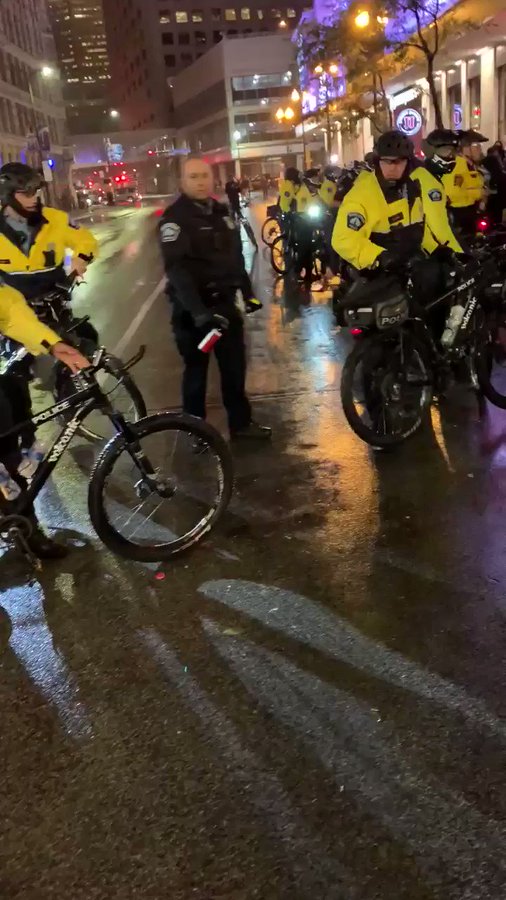 2,484 people are talking about this

It’s time to stop the violence, the lunacy and the insurrection. PJ Media’s David Solway has written an outstanding article that makes the case. Via PJmedia.com:

Any decent and impartial observer can see that leftist and corporate America has come to resemble a cloacal bog of lies, corruption, slander, censorship, entitlements and violence, a veritable “swamp” as it has been aptly called. What commentator Diana Sitek writing in American Thinker calls “the entitlement to depravity embedded in the Left’s social justice dogma” is both massive and unrelenting. The media, the academy, the entertainment industry, Big Tech, the Democrat Party, and the “Deep State” are profoundly engaged in a networked alliance to overturn the results of a lawful election and subvert a legitimate and effective presidency. President Trump has vowed to “drain the swamp” but it is moot whether a single individual, regardless of the power of high office, with little in the way of institutional support — and despite his strength of character and resolve — can thwart what is nothing less than an ongoing political putsch.

The attempt to impeach the president on no reasonable or substantial grounds is merely another frantic yet tenacious effort by the coup-obsessed Left to unravel the fabric of a constitutional republic. This is plainly the purpose behind the Democrat’s infamous Green New Deal inspired by the U.N.’s Agendas 21 and 2030 which, under the guise of sustainable development, lay out a plan for the punitive regulation of reliable energy sources, the elimination of private property, redistribution of personal wealth, restriction of due process and, of course, the diminishment of American dynamism and prestige. It is a program that perfectly encapsulates the overarching agenda of the political Left, namely, a protracted war on the free enterprise system and the emasculation of the Constitution of the United States, to be accomplished under the stewardship of a plutocratic elite.

Most conservatives are in agreement about the problem. What should be done about it, however, remains an open question. Clearly something like a classical lustration needs to be undertaken, a “purification of the fields” or, in this case, a cleansing of the noisome bog which is current American politics. It is the Party of impeachment that needs to be impeached, those who advocate or practice insurgent violence or call for the assassination of the president who must be arrested, an activist judiciary that exceeds its mandate and seeks to frustrate executive actions that should be selectively disbenched, and a seditious media that needs to be held accountable for its violation of the SPJ Code of Ethics. The issue, however, is whether the great purge of unsavory and dissident institutions, organizations, and power brokers can succeed via discursive, procedural, and electoral means or whether something far more dramatic is needed to prevent the end of the unique republican experiment that is the United States of America.

With luck, salvation may come from the electoral process, but it offers no guarantee to defuse the threat to the nation’s survival posed by an openly totalitarian Left intent on seizing the apparatus of state control. Elections can be rigged, lost, discredited, or resisted. Perhaps the president’s popular rallies and Twitter fusillades will have a salutary effect on public sentiment, provided the rallies are not shut down and his Twitter account is not compromised. Articles, essays and books by conservative defenders of the republic deploring the ruse of “democratic socialism” may nudge a few fence sitters to come to their senses. All such putative solutions are regrettably weak.

To reduce or dismantle the almost total domination of our public, cultural, and political institutions enjoyed by the manorial Left may require something more than luck, an aggressively tweeting president, or the rhetoric of lamentation. Articles such as this one bemoaning the current state of affairs have been posted and published in abundance; they are laudable but unfruitful and generally stop short of endorsing more decisive measures. As I have written elsewhere, it is not enough merely to say that the Democrat Left is a totalitarian enterprise. If this is true, then it behooves us to offer definitive solutions, to recognize that analysis and verbal alarms are not the equivalent of Paul Revere’s legendary ride and will not deter a dedicated adversary intent on subversion and treason. If necessary, the president must be prepared to invoke Article III, Section 3, of the Constitution, which provides grounds for the prosecution of treasonous acts against the Republic. If such a measure is considered unpalatable, too harsh or counterproductive, there is always the Insurrection Act which enables him “to put down lawlessness, insurrection and rebellion.” At any rate, it is an expedient worth contemplating and falls within the purview of presidential authority.

The very same lunatic Leftists who are violently attacking Trump supporters would be screaming bloody murder if such attacks were being waged against transgenders or socialists. But when conservatives are viciously attacked, the left-wing media reports nothing while left-wing city leaders almost always blame the Trump supporters.

As reported earlier on Natural News, even NBA coaches like Steve Kerr now worship communist China and trash America at every opportunity. Steve Kerr is typical of left-wing idiots: He celebrates the organ harvesting, rape, torture and human suffering of communist China, having no clue that if these radical Leftists get their way, they will unleash mass executions of conservatives across America… and no one will be safe (except the obedient, of course).

Leftists are now quite literally trying to turn America into a communist authoritarian regime. And Democrats are pushing hard to “impeach” President Trump with fabricated impeachment claims that are nothing but wholesale deep state CIA hoaxes.

The time is rapidly approaching to stand up and stop the lunacy. President Trump must invoke the Insurrection Act. Watch my videos to learn more:

See the 1991 Russian movie on You Tube titled 'The Checklist'. This is an accurate depiction and portrayal of the Red Terror that gripped Russia, the Ukraine, and parts of Eastern Europe. This is what the Far Radicalized Left has planned for Conservatives, Christians, and Patriots. The actions speak louder than words, but the lack of action to stop this movement (a Zionist-sponsored terrorist organization) by the Executive Branch indicates that Jared Kushner is actually running America, with Trump as a figurehead. We're waiting to see IF Trump sends the Kushners home, and replaces them with Robert David Steele. If not, then RDS will be the write-in Presidential choice on my absentee ballot! Gear up, contact departure..radar contact!

The Insurrection is now very blatant. It's not just a matter of putting down an insurrection, but also one needs to FOLLOW THE MONEY TRAIL! And many parts of Law Enforcement, from the Deep State FBI and other arrest-powered alphabet agencies, right down to the town constables are most likely compromised, corrupted, and conspiratorial against the citizenry. There are exceptions, with regards to Military Commanders, Sheriffs and Police Chiefs refusing to carry out such anti-Constitutional conspiracies, but these types are becoming fewer and fewer as Soros-Based Funding seems to have to end to the money available to overthrow governments, causes, etc. Veterans should by now be in touch with other Vets for contingencie planning & logistics

There is no lawless…

There is no lawless insurrection in America, there are only strategic global alliances congealing global convergence. No global power has moved unilaterally in decades. No seated power of any developed nations of any country, let alone trump. What. Somebody think trump is a patriot. Wow. Hard to imagine anybody that transfixed and mired by cognitive dissonance. Last pope, last prophet, last president, last king, last queen, last dictator, last shawman, last holy roller, last preacher, last teacher, last holy ghost, for far greater nobility was earths destiny, as the world be managed and run the new world counsel, wealth and health for all regardless of color creed sect or geo origins, a new better kinder gentler loving new world for all.