The Noose Is Tightening Around the Necks of Pelosi, Brennan, Schiff, Biden and the Other Deep State Democrats

Referencing the cover photo thumbnail, with regard to an alleged declaration of law by a group of unnamed generals, somebody really wanted The Common Sense Show to report on this martial declaration. It was sent three times, from three different email addresses. Before you lock and load and hide the kids, you should know that this is absolutely fake. However, it speaks to the desperation of the bad guys (ie the Deep State via the radicalized Democratic leadership).

This so-called "fake" declaration of law, according to sources I consult with, is a weak attempt to rally troops. "Here comes Trump....he's out to get you...Democratic children will be sold to the devil..."  This is all designed to promote an atmosphere of conflict. Some have suggested that it is likely that General Dunford, an avowed enemy of the President is the source of this forgery. In this scenario, Dunford may be trying to turn some "borderline" Generals against Trump as he moves some towards a military coup against Donald Trump. However, this, too, is not likely since the President is surrounded by fiercely loyal Marines.

This article explains the desperation being felt by the Deep State Democrats. Violence is probably the lone remaining option.

Tom Fitton of Judicial Watch says that John Brennan is under investigation for perjury. Paul Preston, President of New California, stated that Brennan will be under inverstigation for much more.

The reason that Pelosi is hanging on to the articles of impeachment is because she fears the discovery process in the Senate Impeachment trial. This is why she and Schiff are trying to dictate the Senate trial rules. They want nothing to do with Burisma and Ukraine corruption.

...Filed by private investigator Dominic Casey of D&A Investigations on behalf of Lunden Alexis Roberts - with whom Hunter fathered a child, Monday's "Notice of Fraud and Counterfeiting and Production of Evidence" alleges that Hunter Biden and associates Devon Archer and John Kerry stepson Christopher Heinz engaged in a money laundering scheme which accumulated over $156 million between March 2014 and December 2015...According to the document, Biden, Archer and Heinz became directors of consulting firm Rosemont Seneca Bohai, LLC in order to "conceal their family members ownership," (EDITOR'S NOTE: THE FAMILY MEMBERS WHOSE IDENTITIES WERE TO BE CONCEALED WERE THE FORMER VICE PRESIDENT OFTHE US AND CURRENT PRESIDENTIAL CANDIDATE FOR THE DEMOCRATIC PARTY, JOE BIDEN, AND THE FORMER PRESIDENTIAL CANDIDATE OF THE DEMOCRATIC PARTY FOR THE DEMOCRATIC PARTY, FORMER SENATOR, AND FORMER SECRETARY OF STATE, JOHN KERRY. PLEASE NOTE IN THE FOLLOWING PASSAGE, THE CHICOMS ARE INVOVLED) establishing financial accounts at Morgan Stanley and China Bank, the latter of which was used in a money laundering scheme.

...The filing also says that "Family members of DEFENDANT Robert Hunter Biden, Devon Archer and Christopher Heinz are business partners of Serhiy Leshchenko and Mykola Zlochevesky in the Ukraine, and are currently under investigation for their part in the counterfeiting scheme." (EDITOR'S NOTE: MYKOLA ZLOCHEVESKY IS THE OWNER OF BURISMA!) 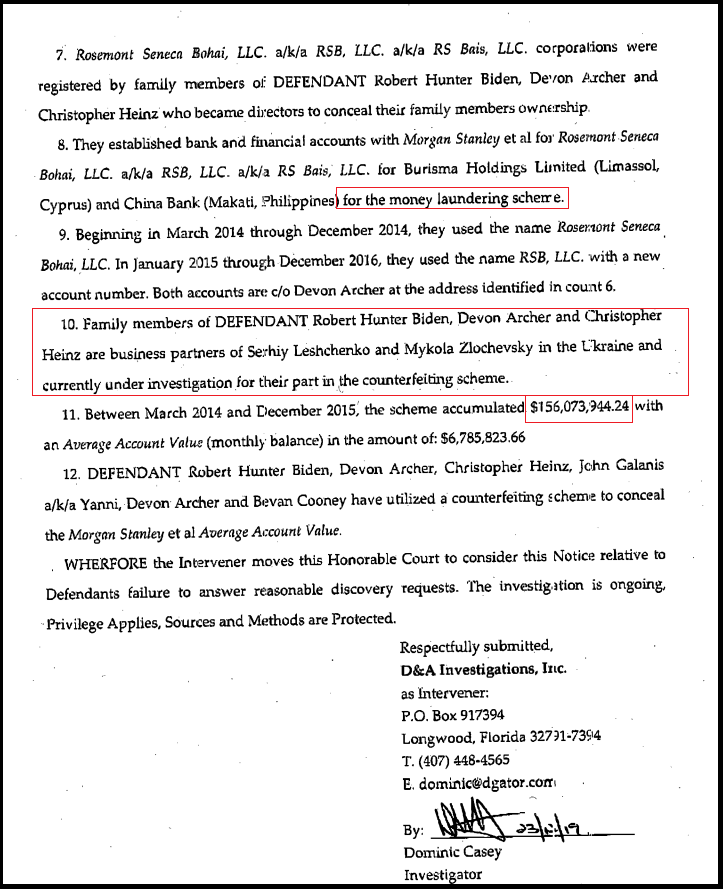 The Deep State Democrats Have Even More Corruption to Coverup

On December 5, 2019, Fox News reported that Trump threatened to have Schiff, Bidens, Pelosi testify in Senate. Could the folloiwng have anything to do with that request? It is strongly rumored that Chappo Guzman was allowed to testify in his trial and did. The testimony was abruptly halted when Guzman stated that he laundered $150 million to Pelosi, Schiff and Clinton. Guzman's testimony was stricken and he was barred from testifying any further. Of course, the government says that Guzman never testified. Regardless, the following information was definitively revealed in Guzman's trial.

I would be willing to bet that the President is little more that interested in these events. It certainly explains the propensity for the advocation of open borders by these prominent Democrats.

In 2014, based on information from a DEA agent, I published the folloiwng. The linkage to 2019, should be apparent

During the 2014 immigration crisis, I was befriended by a DEA special agent who was fed up with elements of the Obama administration allowing terrorists, cartel members and large quantities of drugs into the country. He reached out to me in order to publicize the public betrayal by the Obama administration. I quickly arrived at the conclusion that America is in the process of being transformed into the same type of narco-terrorist state as we see in Mexico. Let’s consider the public drug trial of Jesus Vicente Zambada-Niebla as a case in point.

“Jesus Vicente Zambada-Niebla, the Sinaloa cartel’s “logistics coordinator” and son of a principal Sinaloa leader, asserted in court documents that he is a U.S. informant and Sinaloa was “given carte blanche to continue to smuggle tons of illicit drugs into Chicago.” “Niebla also alleged that Operation Fast and Furious was part of an agreement to finance and arm the cartel in exchange for information used to take down its rivals”. The details of the unholy agreement between the DEA and the Sinaloa cartel was that the DEA would allow 80% of all drug shipments into the United States in exchange for intelligence information on the other drug cartels. Why would the DEA want intelligence on the other cartels, yet, they would allow the Sinaloa cartel to continue with their drug operations right under the noses of the DEA. “The agents stated that this arrangement had been approved by high-ranking officials and federal prosecutors,” the Zambada-Niebla lawyer wrote”.

After being extradited to Chicago in February 2010, Zambada-Niebla argued that he was also “immune from arrest or prosecution” because he actively provided information to U.S. federal agents.

Great Info Dave! The democrats are on the run and now backed into a corner and nowhere to go except possibly start a civil war across this nation to get the noose off there necks. They would rather destroy a nation than to go to prison for there corruption and crimes. Yes Dave you really need to get some serious security or the corrupt people in the Deep State will do there best to stop you doing anymore damage to them, no matter what it takes! We the people do not need you as another martyr! Thankyou for all you do!

After the people showed up at the FARM in alpena mich.a US MILITARY helicopter,flew over the farm and DROPPED A SMALL TACTIAL NUCLEAR WEAPON ON THE FARMHOUSE,the hole where the farm was,was about twenty feet deep,the trees were blown down for two miles,millions in damage,the shock wave was felt for twenty miles away,THERE WERE 900 people at that meeting on how to throw OBAMA from office,they all died,a lid tighter then glue was put on it all,EXPECT TO SEE IT HAPPEN AGAIN,OUR FATHER said HES SENDING THE US MILITARY TO HELL,and HE won't allow a single one to escape.the hero's of america are DEVILS FROM HELL,and very SOON their all going back home....

In reply to THE MEETING by ARIZONA NONE

This did not happen according to a MI resident. This kind of incident would be on a par with Waco and Ruby Ridge, both of which made international headlines for weeks. Why would you make up such a false report when it’s easy to trace something g as big as a nuclear weapon going off in this country?! Check your facts and the integrity of your source(s).

Remembered, Obama purchasing 35,000 drones. I thought that strange at the time but not now.

I sent Dave’s article and your comment about the farm in Alpena MI being nuked. He’s saying that’s pure rubbbsh...not a word of truth. So I’m wondering, just who are you and what is you motive [agenda]. To post an outright lie of this magnitude looks like provocation to me.