IS THE CDC PLANNING TO USE SCHOOL CHILDREN AS COLLATERAL TO LURE IN FUTURE UNDESIRABLE, DISSIDENT ENEMIES OF THE STATE? HISTORY SAYS YES!!!

The Ohio Governor has endorsed a program of isolating, in secret locations, facilities to house Covid-19 patients and SUSPECTED people who MAY have been exposed to COVID-19. This is called FEMA MEDICAL MARTIAL LAW CAMPS that Celeste Solom and myself have exposed to the public through a series of documents as presented in previous radio interviews.

Ohio is frequently serves as a beta test site for "new" programs in order to test the public's acceptance. Presently, the CDC and the Governor of Ohio are JOINTLY endorsing the program known as "PROTECTING YOUR IS CHILD IS AS EASY AS ABC" as developed by the CDC:

Protecting Your Child Is as Easy as A-B-C

Bring extra medication, special foods, or supplies your child would need if you were separated overnight

Follow these A-B-C’s so that emergencies are less chaotic, children can be kept safe, and families can be reunited safely as soon as possible.

Since most children attend school within a few miles of their home, why would they be kept by the school? Who decides when children get to be picked up by their parents. There are far too many questions that are not answered here. This is a blank check for a governmental agency, the school, to determine your child's fate. I understand the need for schools to act in the best interest of the child if an emergency strikes without warning. However, CDC program raises far too many red flags because of the lack of specificity. At the end of the day, who controls the child, the parent, who has arrived to pick up their child, or the government?

I have addressed this issued before and I think it is prudent to look at what the Obama administration, and all 50 states have tried to enact in recent history.

At your children’s school, you cannot even have your child’s aunt pick them up unless she is registered with the school and shows identification. This is a good policy as it protects children. However, these rules did not apply to the Obama administration because they felt that they owned your children.

On September 23, 2011, children, without warning, were abducted from their Denver Public Schools, without the permission of their parents, by FEMA and taken to the Colorado Sports Authority football stadium. This set a precedent that FEMA can literally kidnap children from their schools without parental permission or notification.

As a part of the drill, several busloads of school children were taken to Sports Authority Field along with their teachers. Surrogate parents were hired by FEMA to attempt to pick up their children at the stadium. The training was apparently a desensitization exercise for security personnel designed to refuse demands to pick up their children from these “pretend” parents. The real parents of these children were not properly notified that their children would be transported to the stadium and would be a part of this disaster drill. As a parent, I have a major issue when government officials refused to release children to their parents because the authority over a child belongs to the parent, not to a government agency. In the latter part of the event, as parents discovered that some of their children were likely transported to the stadium, some parents attempted to go to the venue and secure their children.  When they did so, at least initially, the children were not released to the parents. Again, who is the sovereign, the government or the people?   Speaking of Denver International Airport, explain the meaning of the above depiction which was displayed for years near airport baggage.

During Operation Mountain Guardian, the elite were flown into Denver International Airport from which they disappeared, presumably underground, for the three days that the drill lasted. Meanwhile, on the surface, children were being abducted from their classrooms by government officials from FEMA.

ISN'T IT COINCIDENTAL THAT TODAY, CONTINUITY OF GOVERNMENT HAS OBVIOUSLY BEEN DECLARED AND THE UTAH BASED EMERGENCY TUNNELS AND RESIDENCES ARE BEING OCCUPED AND IN KINGMAN, AZ, OVER A 3 DAY PERIOD, A LARGE CONTINGENT OF THE MILITARY GATHERED TO CLOSE OFF THE ENTRANCES TO THIS TUNNEL SYSTEM? HISTORY IS REPEATING ITSELF. IN 2011, THIS WAS A DRILL, TODAY, THAT DOES NOT SEEM TO BE THE CASE.

Not An Isolated Incident

Operation Mountain Guardian drill was an isolated incident, perhaps the sounding of the alarm bells would be a gross over exaggeration. Unfortunately, this is not the case,  these kinds of drills have been popping up all around the country and the overtones which accompany these drills are very disturbing.

In 2015, the St. James Catholic school letter to parents about the impending lock down drill. The school is requesting that parents provide supplies to the event in order that the children will be able to stay at the school on a more permanent basis. 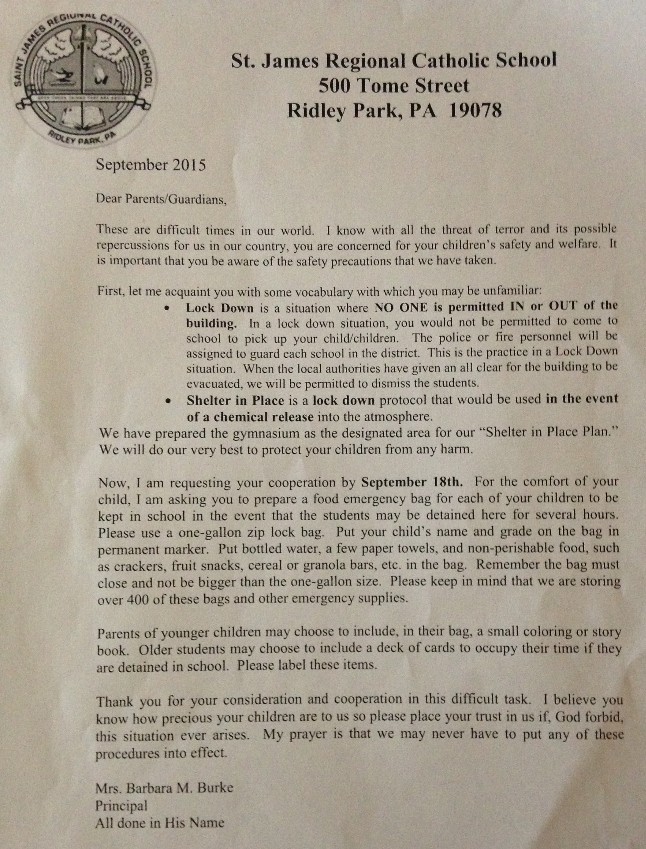 In fact, FEMA has already prepared its strategy which is designed to turn schools into FEMA camps. FEMA has published a training manual which serves as the rough draft model for school safety to be enacted by all 50 versions of the State Department of Education, in times of an emergency. Of particular importance and relevance is a document  from the Arizona Department of Education entitled “Staff Skills Survey and Inventory“, which is located on page 76 of their school safety manual. Please note that the lock down letter featured above, mentioned Some of the skills listed in the inventory make good sense (e.g. EMT, CPR skills, etc). However, there are some skills being surveyed which are concerning because the skills suggest an air of permanence to the use of a school as a permanent site for housing children (see below). Eventually, these skills, along with the permission to keep children from parents, ended up BECOMING OPERATIONAL in all 50 states.

HISTORY IS REPEATING ITSELF AND PARENTS WOULD BE WISE TO FAMILIARIZE THEMSELVES WITH THE LOCKDOWN PROCEDURES OF THEIR SCHOOL. WHO IS THE SOVEREIGN? WILL CHILDREN BE USED AS COLLATERAL TO LURE IN POTENTIALLY UNDRESIRABLE DISSIDENTS WHO ARE CONSIDERED TO BE ENEMIES OF THE STATE. BEFORE YOU SCOFF AT THIS EXPRESSED CONCERN, I WOULD ENCOURAGE YOU TO ASK YOURSELF A QUESTION: WHY HAS THE FEDERAL GOVERNMENT BEEN REHEARSING THESE PROGRAMS, WITHOUT REGARD TO PARENTAL AUTHORITY FOR THE PAST NINE YEARS AND WHY IS THE CDC CHAMPIONING THESE PROGRAMS?

Are you familiar with the Tartarians who were destroyed in a depopulation event (1800's I believe, w/DEWs)? I read they repopulated with orphan children who had no memory of the past. Could this be the plan for the world's children? They will remove the children before whatever they have planned for the rest of us (poison the water supply perhaps).

SO the federal government is going to kidnap the children,well we heard this TWENTY years ago,ONLY we heard they'll take the kids and SAY..WE'LL TRADE THE KIDS FOR YOUR WEAPONS,the women of course would demand the HUSBANDS GIVE THE POLICE OR MILITARY THEIR WEAPONS AND AMMO,OH WE LOVE THE MINIONS OF SATAN ..THE POLICE GANGS who will be in charge of raping ,looting and murdering the children,YOU KNOW THERE IS "NO" PLAN TO GIVE THE CHILDREN BACK TO THE PARENTS..they will lock up the parents too,THE GOOD news is, I don't think the police gangs OR,their friends will be allowed into heaven,there'd be a war in heaven if our FATHER did,hahaha,and the girlymen love the police,they'll love their NEW DADDY SATAN TOO...

That evil mural in DIA…

That evil mural in DIA communicates everything these Luciferian Leftists seek to do in this world. How anyone can look at it as benign is truly asleep...