Bombshell in the making: Did Adam Schiff pull a Jussie Smollett and FABRICATE the existence of the whistleblower?

Earlier today, President Trump declared that he believes Rep. Adam Schiff wrote the so-called “whistleblower” complaint (see video below). But the official whistleblower complaint story is unraveling by the hour as new facts emerge, pointing to a far more shocking likelihood: That Adam Schiff may have fabricated the existence of the whistleblower himself, in effect projecting his own complaint onto a fictional persona that he is now going to question in a private, closed-door congressional session where he will essentially be questioning himself.

This scenario isn’t proven yet, but it’s looking more and more like Adam Schiff may have pulled a Jussie Smollett. Instead of tying a noose around his own neck and faking a hate crime, he may have fabricated an entire “whistleblower” persona and written the whistleblower complaint himself in a psychotic, desperate effort to try to destroy Trump before AG William Barr drops the mother of all bombshells about the Democrats’ involvement in a vast criminal conspiracy to try to overthrow the President of the United States of America.

Schiff knows that if Trump isn’t stopped, a long list of left-wing traitors will likely be prosecuted and jailed. That list may include Adam Schiff himself, who has been linked to Ukrainian arms dealers, and Joe Biden’s son who is now known to have received $3.4 million in “criminally obtained” laundered money, transferred to his business accounts as part of Joe Biden’s shakedown of international oligarchs and mafia organizations. Don’t forget, either, that Barack Obama laundered billions of dollars internationally in order to fund Iran’s nuclear weapons program, a clear act of criminal treason against the United States. 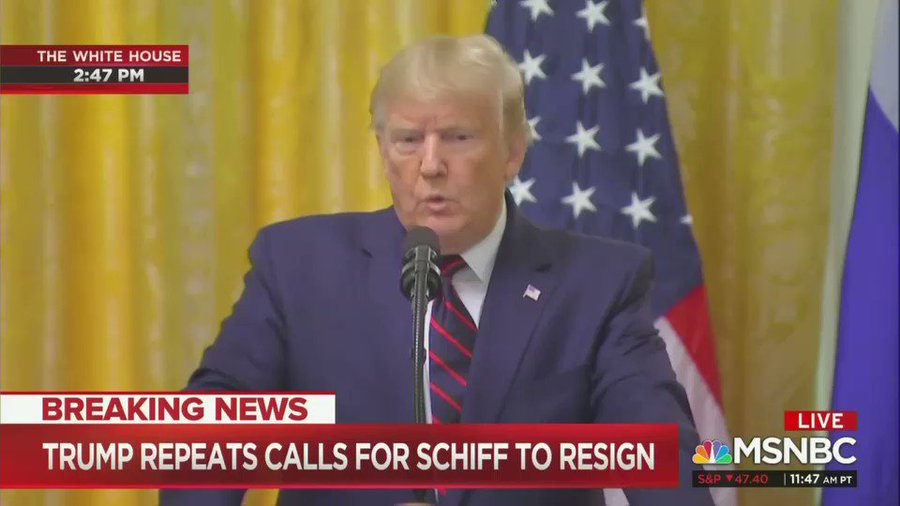 This entire “whistleblower” hoax has been masterfully orchestrated by a combination of deep state intelligence players, left-wing media hacks and Democrat legislators. They are all playing their roles as crisis actors, feigning outrage over a non-crime “crime,” even resorting to completely fictionalizing a whole new “transcript” of what they hope Trump said on a phone call with Ukraine’s President (which Adam Schiff read into the congressional record a few days ago to try to gaslight the entire nation about what Trump really said).

Democrat deep staters have reached the point where there’s nothing they won’t try to take down Trump, since they are fully aware that Trump is already in the process of rolling a large number of truth grenades into their deep state bunkers, all of which will detonate in short order with catastrophic consequences for the treasonous Dems.

As you’ll see confirmed in the coming days, it seems increasingly likely that Rep. Schiff is his own made-up source, which is consistent with the new rules of so-called “journalism” at the Washington Post and New York Times, where “anonymous sources” are fabricated out of thin air to substantiate any false allegations they wish to print.

Ironically, the New York Times has now reported that Schiff knew about the whistleblower complaint days before it was officially filed. That’s because, of course, he’s the one who wrote it!

To the shock and dismay of all informed observers, the Democrats are now fabricating everything, not just the news. They are falsifying transcripts, falsifying evidence and probably even falsifying entire personalities whom they can label “whistleblowers” while demanding no one ever learn their real identities. Adam Schiff has become to politics what Bernie Madoff was to investing: Nothing but a highly-positioned con artist whose reckless psychosis will send shrapnel tearing through the entire Democrat party once the delusion implodes.

Perhaps Rep. Schiff has a hand puppet in his bedroom that talks to him and tells him all the evil things Trump has done. We’re looking at extreme mental illness with this devious character… the kind of villainous evil that we see depicted in The Joker from Batman movies, or the original Psycho thriller where Norman Bates took orders from his long-dead mother who encouraged him to be a creepy stalker of hotel guests.

The only difference is that Norman Bates wasn’t a member of Congress, and he didn’t try to gaslight an entire nation into believing his decaying dead mother was really a whistleblower who could take down a president.

Speaking of creepy movies, this is way beyond Sixth Sense, as Adam Schiff not only sees dead people; they seem to actually talk to him and provide him with testimony to take down Trump because Orange Man Bad. Or better yet, perhaps Adam Schiff gets witnesses to talk to him through Ouji boards or bizarre, demonic incantations involving pentagrams and the entrails of murdered human babies which are readily available for sale at your local Planned Parenthood abortion clinic as long as you claim the organs are for “medical research.”

This entire fiasco is also a near carbon copy of the playbook used via Christine Blasey Ford to try to fling false accusations against Brett Kavanaugh, by the way. Of course, Ford was a real person (with a fake story), while this Ukraine “whistleblower” increasingly appears to be a complete fabrication and not a real person at all. With Ford, they were faking memories. With Schiff, they’re faking entire sources.

No doubt Shift Schiff is desperately running around the halls of Washington D.C. right now trying to recruit someone who will agree to be named as a whistleblower, so I don’t doubt that Schiff can eventually produce a name and perhaps even a body (whether it’s alive or dead is yet to be seen), but it will become obvious within hours that this whistleblower is nothing but a proxy, having no direct knowledge whatsoever of the events claimed in the official complaint, which was clearly written by Schiff himself.

The bottom line? Rep. Adam Schiff appears to be engaged in one of the most malicious and psychotic acts of insane criminality that has ever been carried out by an active member of the U.S. Congress, and when this blows up in his face, it’s going to take down the entire Democrat party for 2020 and beyond.

The Schiff is going to hit the fan, in other words.

In a hilarious kind of way, Adam Schiff is truly God’ gift to Trump’s re-election efforts in 2020, and as much as Mad Maxine is now calling for President Trump to be arrested and tortured in solitary confinement, I wouldn’t be surprised at all of it’s actually Adam Schiff who ends up in prison… perhaps with a few cell mates named Brennan and McCabe who also end up thinking dead people are talking to them, too. Could all those voices in their heads actually be the ghosts of Arkancide?

Shiff's only loyalty is to…

Shiff's only loyalty is to israel, and his deep state pedophile friends. Why these false prophets are not arrested is a mystery to me. These pond scum so called elites parade their arrogant asses around knowing up till now that they can walk away from any transgressions of our laws. Why the whole Clinton family is not in jail makes my blood boil. Patriots: the left is goading us into "shooting first", but dont fall for that ruse. Once they start the shooting war, it will be time to take the gloves off and pulverize these bastards back to a place before creation itself. Be wary, be ready, and wear the armor of god at all times. We come out on top when the Turkey shoot begins. Enuf said you know the rollcall.

Dave: I've wondered about Adam Schiff for some time now; in the early days of the Rothschilds, they shared a home with the family of Jacob Schiff in Frankfurt,Germany. This would have been in the late 1700s. Jacob Schiff was sent by the Rothschilds to to set up their banking interests in the US. Schiff was instrumental in setting up banking houses such as Goldman Sachs and Kuhn Loeb. The Rothschild family eventually took ownership of the Federal Reserve, despite the claim that there are seven owners; they're all shills for the Rothschilds, the richest family in the world, who we never hear about. Regarding Adam Schiff, I wonder if he is a descendant of the family of the notorious and conspiring Jacob Schiff?

If Schitt-for-brains is on camera at zero dark thirty in the morning outside a local Subway, we'll know for sure the whistleblower story's a hoax! Perhaps Schiff needs to be taught a lesson about what happens when one fabricates a hoax, by 2 MAGA-hat-wearing redneck Nigerians!