HIDDEN HISTORY: The Greatest Threat to Humanity Is the Brahmastra and the Surviving Nazi Empire Beneath the Ice

Indiana Jones may be fiction, but the lessons are accurate. Yes, the Nazis conducted a world-wide search for ancient alien technology and lucky for us they were were not able to operationalize their discoveries into battlefield plans, or did they?

By the way, the following broadcast exposes the fact that 1945 was not the first time a nuclear explosion happened on Earth. The following is a glimpse into our hidden history. Following this short broadcast, I break down some of the elements which demonstrates that the technology granted to the U.S. Space Command is not new and with the wrong leadership, it could be used to totally destroy or enslave us. 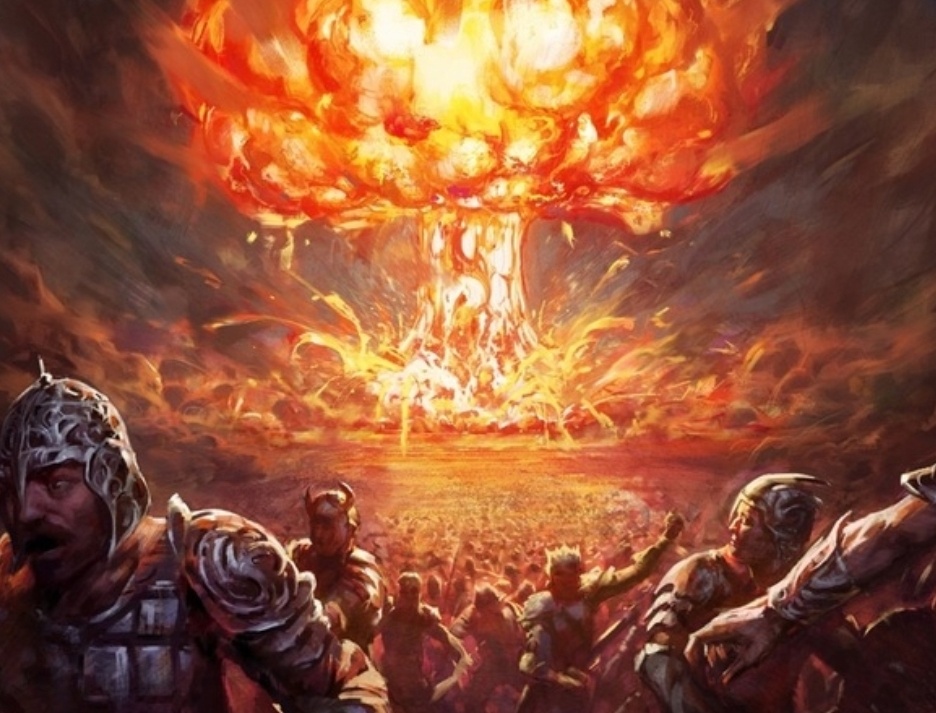 The weapons being pointed down upon from space are ominous and they are not new. As ancient Indian legends would tell the story, the Brahmastra is a super celestial weapon which was created by Lord Brahma and was used in epic historical battle of Mahabharata.

As previously stated, historically, the United States was not the first nation, in 1945, to detonate nuclear weapons. In ancient Indian history, there were three variants of Brahmastra (ie a variation of nuclear weapons, but much more possible).

First, the Brahmashira Astra is a weapon that comes from the Brahma's fifth head at its tip and is capable of destroying the whole world. If one knows the history of the solar system and, in particular, the asteroid belt, the use of the term "astra" should hold special meaning. I am warning Christians, be careful how close you allow yourself to get to this information and how closely you embrace it. This is not a path that Christians want to be on. After you read the following description, I would strongly urge you to pray for a divine cleansing and discernment on how to process this material.

Second, the Brahmanada is a powerful weapon that emanates from the bones of Brahma and is a countermeasure of all astras identifed in the first variant of Brahmastra. The weapon was designed as a counter-measure in order to defend against Brahamashira Astra.

The Pashupatastra is the most irresistible weapon in Mahabharata. Possession of the weapon is rare as only Arjuna and in Ramayana only Indrajit are known to have possessed Pashupatastra. This weapon has to be obtained directly from Lord Shiva. Again, Christians, approach this knowledge with extreme caution of ask the Lord for divine discernment.

The combination of the three variants became known as the Brahmastra was hypothetically capable of destroying all of GOD's creation and ending all life in the universe. Before continuing with this revelation, ask yourself, who would want to destroy God's creation? Only divine intervention prevents the realization of this possibility. From what I have read and from discussions with knowledgeable colleagues, I have to come to believe that the full manifestation of this technology, which I am told is being translated from German to English, after the Nazis obtained it from ancient Sanskrit as they translated it into German. Although the Nazis did not have time to perfect this ancient technology, they did bring the knowlege to the United States in Operation Paper Clip. And more importantly, as Steve Quayle pointed out in his ground-breaking book, Empire Beneath the Ice, as Quayle described how "the Nazi Party established a huge and highly secretive presence in both the Arctic and Antarctica. Falling the military feat in the Second World War, the most important and influential members of the Nazi Party, including Adolf Hitler, migrated to Antarctica where they established the Fourth Reich. Here, top Nazi scientists and related personnel members, with the assistance of influential people all over the world, established themselves as the most scientifically advanced collective in the world." According to Steve Quayle, the reason that world leaders have suddenly decided to visit Antarctica is quite clear. Those leaders who have been seen visiting the continent are among the individuals selected by the Nazi Party to act as their agents all over the world. The Fourth Reich, via the Deep State, is in full control of our Space Command. This should scare the hell out of every America.

The government operatives that contacted me believe that ancient weapons technologies are possessed by the US Space Command. READ THESE WORDS VERY CAREFULLY: THESE WEAPONS SYSTEMS ARE FROM SATAN AND THEY ARE MEANT TO DESTROY GOD CREATION, NOT DEFEND IT!

If the wrong people are in charge of the Space Command, and the Democrats successfully initiate a civil war, these tremendous weapons of mass destruction can and will be unleashed upon the counter-revolutionary forces (ie the good guys) and their efforts against this Bolshevik takeover of America will fail and the casualty reports listed in the Deagel Report will begin to make a lot of sense.

The agents who approached me have asked me to expose the inner workings of the Space Command in order to give President Trump leverage in making the needed changes before it is too late. I have also been told that I will not be alone in these revelations.

Below is an aerial depiction of Fourth Reich headquarters in Antarctica

Because the Brahmastra can destroy multidimensional physical regions at one time, some historians consider the Brahmastra will be used to try and prevent the Second Coming of Jesus. It will fail. However, that does not mean in the wrong hands, variants of this weapon will not be used by the US Space Command against loyal Americans resisting a coup against their government.

For a deeper understanding related to these dire threats, I highly recommending obtaining Steve Quayle's book, Empire Beneath the Ice. According to Stephen Quayle, the reason that world leaders have suddenly decided to visit Antarctica is, therefore, clear. Those leaders who have been seen visiting the continent are among the individuals selected by the Nazi Party to act as their agents all over the world.

Although American Media Won't Touch This Topic, Fox (India) Is Embracing the Existence of Ancient Technology

Fox (India) is releasing a movie this week which portray an ancient and most deadly weapon. Here is the movie trailer. Although it is not in English, the video provides clear clues as to what this is about. Given the power struggle that is going inside of our Space Command, it is safe to say, that the American mainstream media will treat this topic like the plague. (More revelations follows this short video).

A weapon so ancient, yet the most powerful of all.

Presenting the official movie logo of #Brahmastra. The Brahmastra trilogy is a three–part–film, the first part is slated for release on Christmas 2019.

The suppression of ancient technology and its modern-day applications to various military aresenals is not limited to Brahmastra. In upcoming parts of this series, more technological revelations will be presented along with their geopolitical implications.

This was discussed years ago on Ancient Aliens. Weren't nuclear bombs tested in our desert? and sand turned to glass???

Dave, I believe the only way you can believe in Brahmastra is by rejecting Scripture. Certainly you cannot believe that this ability was applied within the last 6,000 years. I imagine you believe what was presented in the True Legends conference whereby the Gap Theory (between Gen 1:1 and 1:2) is theorized to allow a pre-Adamic civilization. Many biblical as well as scientific arguments preclude the Gap Theory and an old age earth for which I can provide if you are interested. There are over 200 scientific arguments against an ancient earth. To advocate this places you in opposition to the Word of God both by teaching contrary to Scripture and influencing others. Not everything Quayle advocates is true. I have read his book EBI.

A good look at the big picture...

Thanks for going down this particular rabbit hole, it's been a topic of research of mine for decades, since I originally started searching Tesla technology, and soon realized that he had literally simply swerved into Technology that existed many, many thousands of years in our past. This technology isn't the only thing being suppressed, because it is also tied to explorations into consciousness, which has been highly suppressed since the invention of monotheism, which is specifically designed to create the hierarchical structures necessary for a military industrial complex to take over humanity. I would say that has largely been accomplished. Thanks for the tip on The Travelers, I really enjoyed it. It was more than just imaginative.

All things that most of your listeners already know, or should know, but strung together extremly well Dave. Anyone new to these topics is probably experiencing serious cognitive dissonance. To them I suggest taking a step back and then checking your claims out on their own after their head stops spinning. Godspeed from the Missouri Ozarks

Discard the India et al. works of fiction & get real.

I believe you've gone off the deep end on this 1. Hitler lived out his remaining days in Argentina as a protected recluse, funded via the Rockefeller Empire (RE) which funded both Allies & Axis Forces in WW2. After the war, RE again profiteered & subsumed @ various levels the Financial- Intelligence - Military -Industrial powerhouses in the US & directed US world foreign policy & military intervention for its behest. If there is any Antarctica bases, it is small & post-WWII. As for nuclear war in ancient India. Wow! Stop it. 1908 Tunguska had a circa 60 meter 110 ton asteroid that blew up early. Sodom & Gomorrah was a post asteroid strike (depths north of Lisan) hitting an open oil pit that exploded & dropped the whole Dead Sea region.

Enlil, Enki and Enoch; read up on these three, the latter was struck from the Bible! Iron Sky and Iron Sky 2 are movies that now have a video game base...produced by a Finn and the previews are on You Tube. 3 years ago Buzz Aldrin went to Antarctica, about the same time that John Kerry did. Buzz was supposed to have tweeted that "it's evil, and a danger to us all'. Shortly after tweeting, the message was removed. Buzz was treated for a lung infection in Christchurch after being flown-out. Many Heads of State flocked to Antarctica around that same time... Hitler survived to live out his life in Argentina via Antarctica. U-Boat historian Harry Cooper has confirmed this via log books, witnesses and photos. (www.sharkhunters.com).