This article is grim as it focuses on the various strategies designed to keep children and young adults safe on their respective campuses. And as the left is under attack, expect more false flag attacks and at the top of that list will be more school shootings. The left needs an excuse to seize all guns.

How to Prevent School Shootings

How do we prevent school shootings? This is the easiest question that I have been asked. The answer is to put armed cops inside of every school. The answer to is train select personnel employed at the school how to best utilize the gun skills they possess and how to handle an armed intruder. In Israel, every teacher is armed.

Can we stop all school shootings? Of course not, however, there are things we can do to maximize survival.

The major strategy to keep students safe is known as a school lock-down and it is widely practiced in a drill format.

Any type of institutional defense consists of three areas of response: (1) Run; (2) Fight; and (3) Hide. In today’s public schools, lock-down drills are particularly concerning because they focus on only one of the three potential responses, namely, hide.

When I taught self-defense to various public institutions and their employees, running was always the first line of defense. Fighting is never advised unless cornered. However, in today’s lock-down drills, fighting is strongly discouraged and therefore, NEVER practiced. Subsequently, in today’s world, student security defaults to concealment. The problem with hiding inside of a locked classroom, is that when a group is discovered, a locked door will not keep out an armed intruder and then it will be like shooting ducks in a bathtub.

When I taught, it was illegal to have a firearm on any campus in Arizona from secondary to post-secondary. Therefore, I kept a blunt (non-weapon) instrument in my desk. My plan was to, in concealment, to crouch by the door and get inside the pivot range of a rifle toting assailant as they entered the door and deliver a set of crushing blows to the head and then disarm the person.

In reality, I taught my students that running was our best defense and we practiced it. However, liberal administrators were none too happy and called me on it. I remained defiant by challenging their lack of experience compared to my training and I reminded them that they would probably be hiding under their desks with the lights off.

You are the professor/teacher and you hear the gunshots. You imagine, in your mind, that the gunman is coming down your hallway in search of more victims by going classroom to classroom. You hear the screams and yells. You have been trained to hide in your room. Let’s assume that the shooter, usually acting alone, is moving down the hall. Do you think that the shooter is going to assume that your classroom is occupied or empty, as it is Noon, the average time for most school shootings.

The first thing that you should do as you are trained is to lock your door and try and determine how close the shooter is to your room. If he enters your room, the obvious and common sense thing to do is to bum rush the shooter with all the males in the class. However, unless the males are well trained, that is a fool’s errand. The average person can respond to stimuli in less than a second. However, the research shows that that in a crisis, the average person will freeze for 6-10 seconds. That is long enough for a man with a AK-47 to empty his clip into your classroom. However, if you practiced fighting a few times, you might have a chance, but not a good one.

Let’s assume that the assailant is 40 yards away at the other end of the hall. Your 30 students have emptied out into the hall as you have trained them. You will sustain some fatalities as you exit; however, most will escape out of the nearest doors. Then the well-trained students would disperse, thus creating a wide range of fire making it almost impossible to take down many of the fleeing students. In most cases, running, not hiding as is taught to all students, is your best line of defense in terms of saving the maximum amount of lives.

The following has happened on the Continent of Africa multiple times. However, it has yet to happen here but I fear it is just a matter of time.

In the nightmare scenario, intruders enter a school campus and flush the students out of the buildings. Any and all LEO’s are dealt with. As the students run out of their respective buildings, they are met with gunfire from a team that has surrounded the school. This is the one scenario where running is not the best option.

In this scenario, there is yet another team that set up defensive positions for any route leading to the school. This is where the ambush of first responders would take place. It is because of this possibility, that the police will not rush into a building because they do not know what awaits them. Subsequently, all people inside of buildings are on their own for a significant period of time.

Ask yourself this question: Which of the three strategies most enhance survival with all things being equal? The clear answer in most scenarios, is to run. The problem for the child who is trained to run by their parents to run and how to run, is in a classroom with a mindless teacher who is following directions to conceal, the child will probably hide. And if they run outside of the classroom on their own, they are an easy target. Running in mass works best because the gunman generally cannot shoot everyone, but some are going to die and their deaths enhance the chances of survival by some students. This is grim, but this is reality. The truth of the matter is that all schools should be required to do two things: (1) Train teacher volunteers how to handle a gun in crisis situations and then arms those teachers, just like they do in some school districts in Texas; and, (2) All school districts should be required to have at least one off-duty cop on every campus. The latter is the best, but certainly not a fool-proof deterrent.

It is interesting to note that the liberals will object to armed police on campus, but they will call an armed cop to their home for fear of an intruder. The people that are responsible for implementing a one-size-fits-all strategy of concealment are either ignorant of care nothing for the safety of students. Hopefully these words may do some good at some future date. 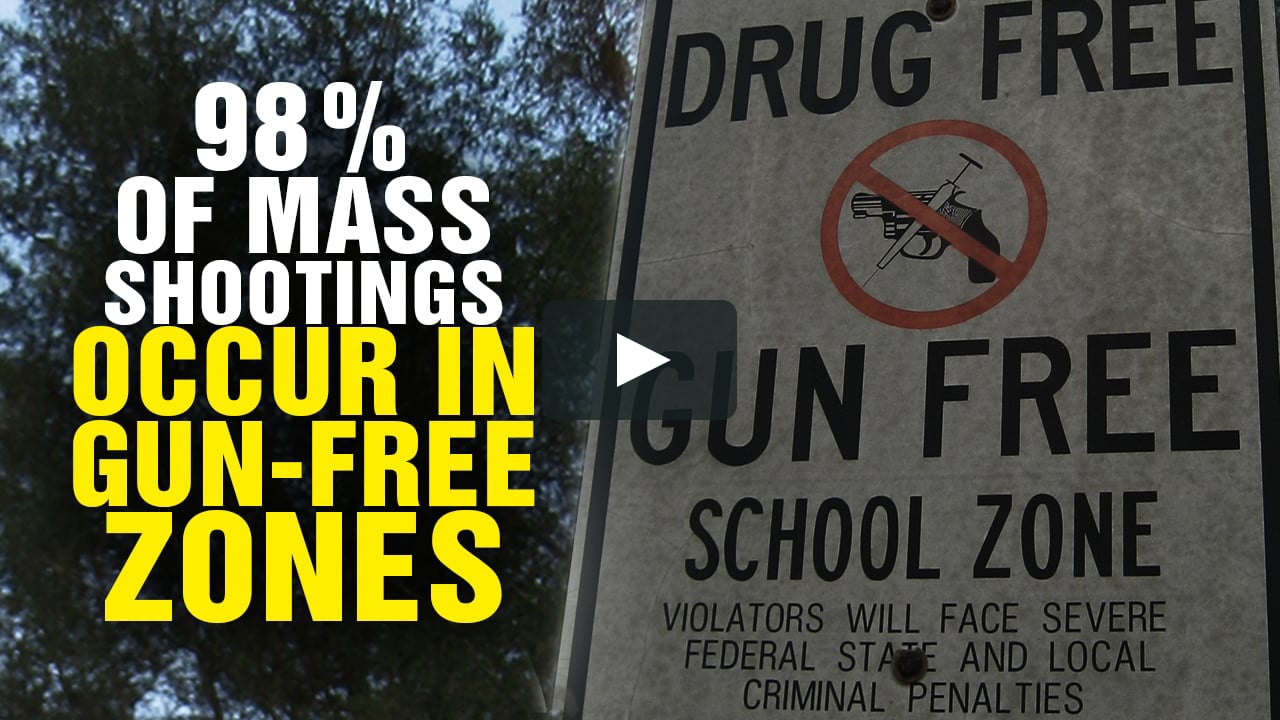 And why are we the only country that consistently has school shootings? Why doesn't anyone ask and answer that question?

Training video for students I saw trained them to turn off their phones as fast as possible so evidence would not be collected and the gov Koolaid is so good that hating the one thing that can save lives persists somehow. Teaching people how to facilitate their own death is the work of wicked scum. I am not big fan of that cowboy at NRA but I will agree with him that when I enter s gun free zone it is no longer one. Gun control is the wicked Nazi/Muslim NWO’s wet dream. Muslims here take one look at me and move along because they know better than to make my day. I know what they’re thinking. They’re thinking, “there’s one”. I do blatantly REFUSE TO COMPLY to my own genocide by process of unconstitutional gun control.

i agree with dave, schools , churches, shopping centers, are all soft targets! solution? harden the targets! think of it like this! every victim of gun crime has an equal right to a gun and had the legal right to shoot back or defend themselves! everyone has a God given right to carry a gun for defense especially in soft targets! banning guns is illegal, if you want to ban guns? ban yourself to red china, get out of my country you pinko commie pigs!

There are several things that can be put in place to stop this madness and one thing that could be done is better perimeter security, actually having someone watching who is entering the grounds and could alert the inside security team to a possible threat. When Cruz got out of that Uber car carrying that long bag red flags should have gone up but nobody was watching him enter the property. He could have been stopped and searched and those kids would be alive today.