Why did ballots scanned offsite continue to be delivered to Maricopa elections center after voting ended?

They were printed by Runbeck Election Services in Phoenix, Arizona. This is the same company local media reported on regarding Rey Valenzuela, elections director, and Kevin Runbeck, owner of the printing company.

Brian Runbeck, a significant employee, has been a prolific financial contributor to Democratic campaigns and causes, records show. 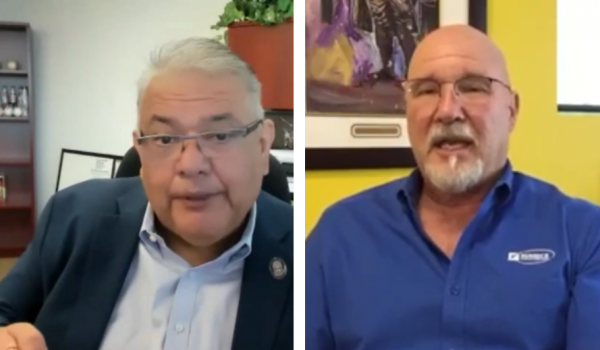 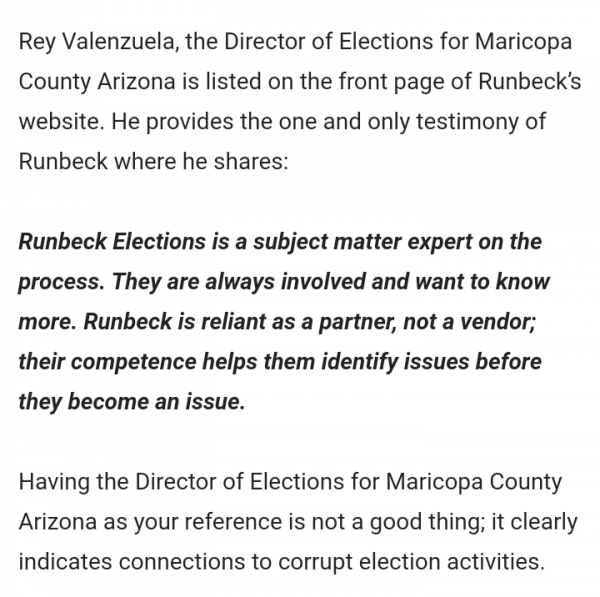 (Note: The reference by Valenzuela has been taken down from the Runbeck website.)

When Rudy Giuliani and Arizona state legislatures held public hearings regarding the Maricopa County election fraud of November 2020, among the most compelling sworn testimonies came from elections witness Jan Bryant.

Her testimony coincided with others and may explain Arizona audit director Ken Bennett’s later revelation that Dominion Voting Systems had refused to comply with a subpoena to turn over passwords to its Maricopa County voting machines. 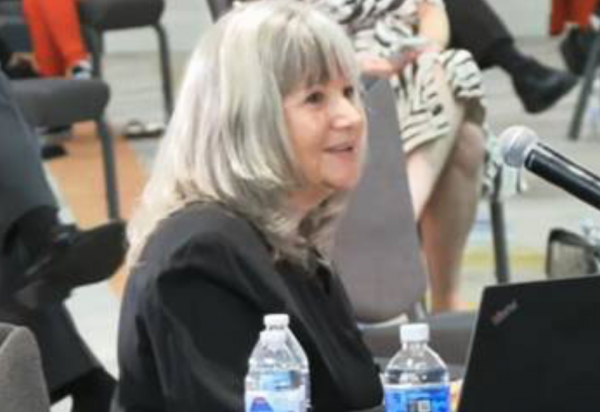 During the hearing on November 30, 2020, Bryant testified under oath that not even county IT staff were allowed access to the machines.

Bryant witnessed Dominion employees with a laptop computer in the counting room during the six days she worked at the Maricopa County Election Center.

During questioning by Republican state Rep. Mark Finchem, Bryant said there were daily election ballot deliveries to the center by Runbeck Election Services. According to witness testimony, these deliveries happened from Nov. 3 to at least Nov. 10. 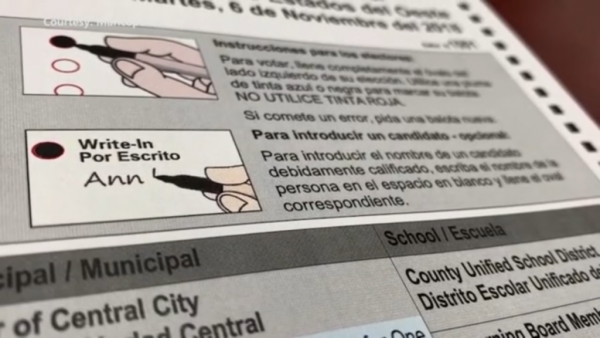 Repeated explanations by supervisors at that time was that “Runbeck has high speed scanners,” Bryant said. She was told the ballots were scanned offsite by Runbeck and then delivered to the Maricopa County Election Center.

Jan Bryant: …ten days before they quit tabulating they thought they were done. And then more truck loads of ballots would come in. And I’m like, how can you not know how many ballots are still out there.

State House Rep. David L. Cook: Mr. Chairman I’m sorry. WOULD YOU REPEAT THAT. They thought they were done, and then there was WHAT?

Jan Bryant: They thought they were done multiple times. Multiple times the people that were running the rooms thought they were done (counting ballots), or almost done. Or were gonna be done Wednesday morning (Nov. 4th), then Thursday morning (Nov. 5th), then Friday morning. Then it went on the whole next week. And I’m like, I asked the question, You don’t know how many ballots are still left to come in? I don’t know who does, again…process…project management, but zero. 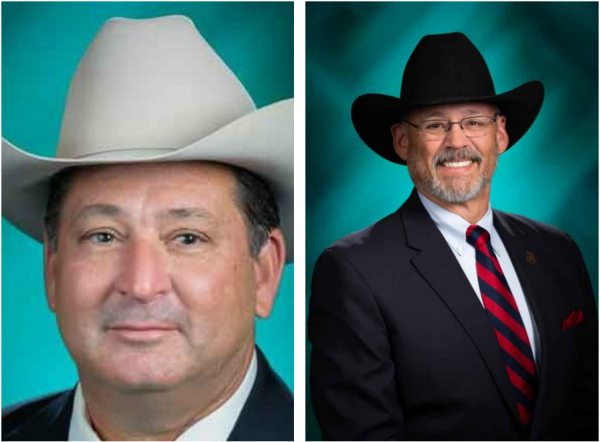 State House Rep. Mark Finchem: On that point Ma’am, I’m tracking with you but, what day did the truck show up?

Mark Finchem: OK. Just a minute. I want to make sure we capture this properly. So there were trucks that showed up on the 3rd, and then the 4th, and then the 5th, and how long did that go on. How many days?

Jan Bryant: I wasn’t there the whole last week. My last day was the 10th and they were still coming in. They were coming from a company called Runbeck, that does the high speed scanning and printing of duplications, and I think the military ballots. And now I’m getting out of my comfort level here talking about this. I don’t know what they are doing but those ballots are coming in from a high speed scanning company called Runbeck that…. apparently you haven’t heard of Runbeck.

Jan Bryant: I can’t tell you.

Mark Finchem: Wasn’t that your job to scan them? I mean, not your job, but the (MCTEC).

Jan Bryant: No, all the high speed scanning happens at Runbeck. So, those ballots go to Runbeck. As far as I know there were no observers there. I don’t know. I never got called to work at Runbeck. That’s all I can tell you.

Mark Finchem: No that’s fine. Your observation is useful here. What you’re telling me is the scanning wasn’t actually done on site at a Maricopa County structure. It was done someplace else.

Jan Bryant: Where they have very high speed scanners.

Mark Finchem: Right now I really don’t care what the speed is. I want to know were they Dominion scanners?

Jan Bryant: No, no, I don’t think it has anything to do with Dominion.

Mark Finchem: I’m trying to understand what was the purpose of scanning them in advance of them being tabulated on the Dominion equipment. 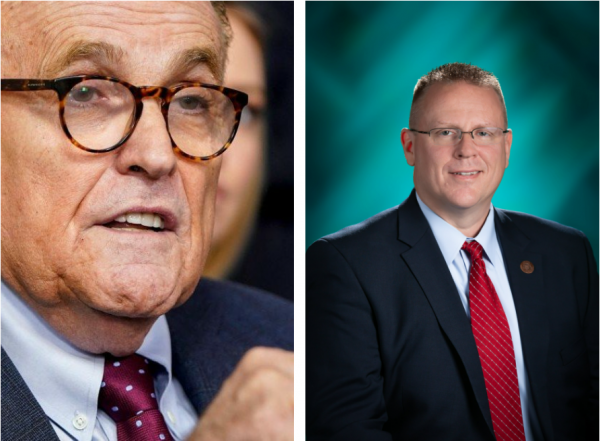 Rudy Giuliani: So you were there from Nov. 3rd through the 10th. Seven days later (after election) ballots were still coming in.

Rudy Giuliani: Were those ballots counted?

Jan Bryant: I watched them go through the tabulation machines. And I watched people working on the adjudication of those ballots.

Rudy Giuliani: And how many ballots…

Rudy Giuliani: What was the largest number you saw in one day. Just a guess. How many cartons?

Jan Bryant: …there was usually 2 or 3 shifts. I wanna say one day they thought 90,000 was a good number, for a shift. And if they were running multiple shifts a day. It was somewhere between the 3rd and the 10th.

State House Rep. Bret Roberts: I am assuming these were not early ballots in any way shape or form. I’m just kind of curious, did anything stand out to you as far as these new ballots, didn’t know where they were coming from, as far as a physical appearance in any way?

Jan Bryant: No. Everything… they just looked like ballots. Just kept coming. They all came in the same bins.

Kevin Runbeck’s brother, Brian, although not listed on the website as an executive with the company, is an employee of Runbeck Election Services. He has also been a regular financial contributor to Democratic organizations, including Biden for President and Act Blue. 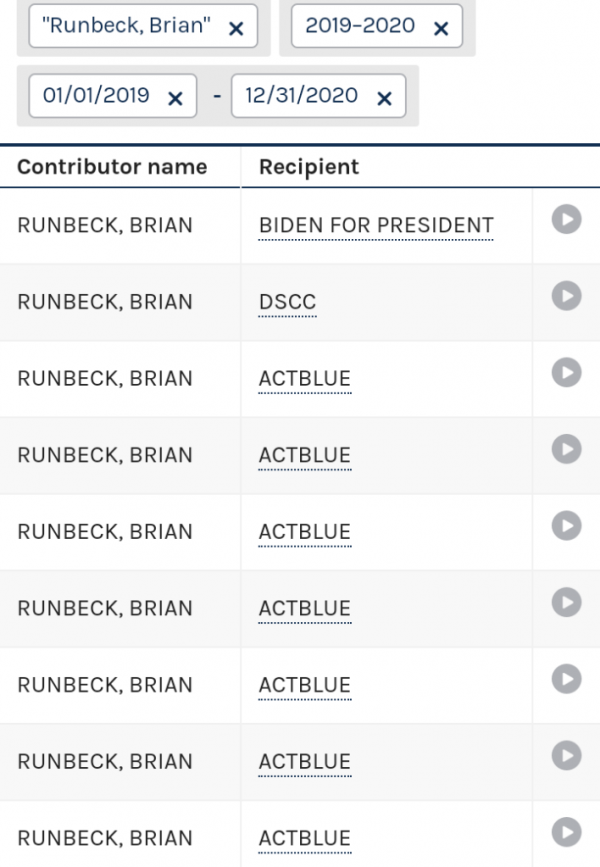 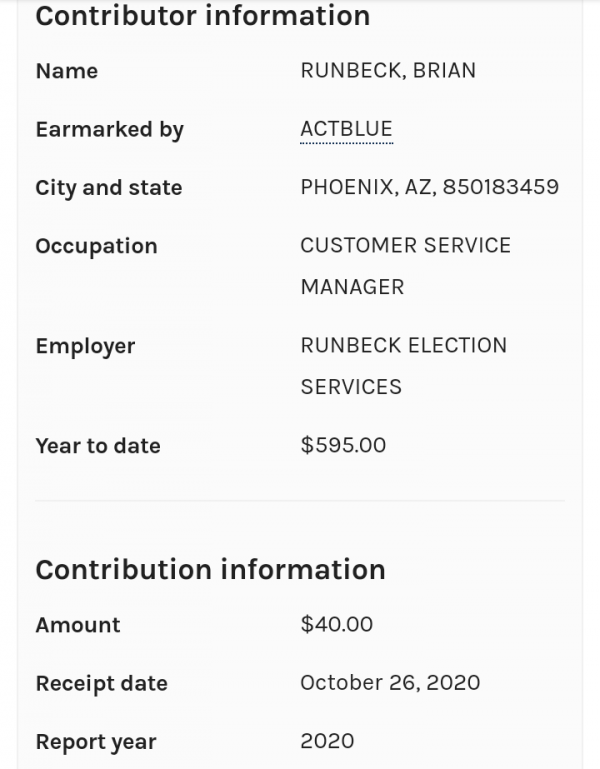