The Chinese Slave Labor Response to the Coronavirus Is Already Part of American Law-It's Coming Here!!!

The Chinese are enslaving their political prisoners to work in supply-chain factories. That will soon be coming here as well as this article will conclusively document.

One should take note that the movement of political prisoners in China to factories for training began in June of 2019, 5 months in advance of the release of the Coronavirus bioweapon. The documentation is irrefutable in that all of this was a planned event.

Since 2017, more than a million Uyghurs and members of other Turkic Muslim minorities have disappeared into a vast network of ‘re-education camps’ in the far west region of Xinjiang. Now that the Coronavirus has demicated the Chinese factory force, the CHICOMS have turned to slave labor. They are simply converting their political prisoners (eg Uyghurs) to slave labor as evidenced in the following paragraphs.

Linked to a Chinese Publication and translated with an online translator:

OrdinarilyThis tells the story of how the Uyhurs and other Muslim minorities have been transferred from re-education camps to a variety of factories all across China.

Look Who's Involved In This Human Holocaust of Ugyars for Sale

The gobal supply chain has been devasted by the Coronavirus. Not to worry, the CHICOMS are masters of slavery and this is what they have done with this population. At the end of the day, it is not going prevent massive shortages on the planet resulting from the calamity in China.

The Australian Police Institute investigated the prevelance of slave labor with regard to the topic being investigated in this article and the following contains a partial list of what they discovered:

There is no denying the global coriporate complicity in slave labor as evidenced by the following social media post by Apple CEO, Tim Cook.

Apple CEO,Tim Cook’s, Weibo post from O-Film’s Guangzhou factory in December 2017. He Knows about the slave labor conditions discussed in the opening paragraphs and who is benefits his corporation: 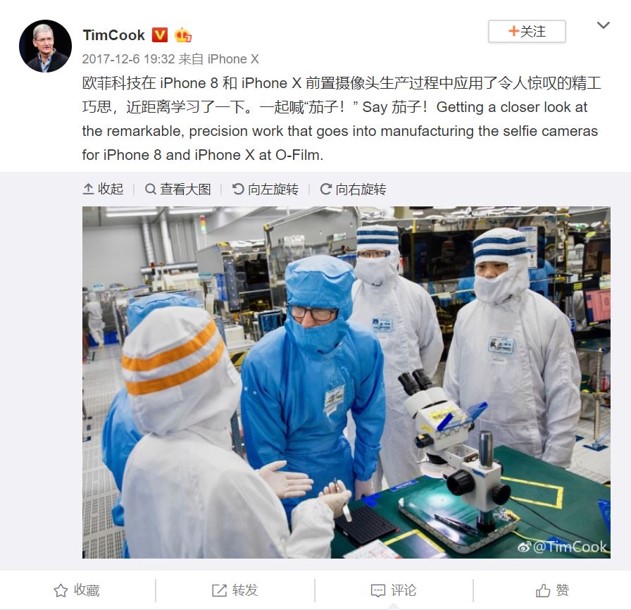 Thee is no way that our government does not know what is going on and there is not one word about this human tragedy and American-based multinational corporations are allowed to continue with this holocaust all in the name of corporate profits. Of course, this slave labor due to the Coronavirus tragedy could ever happen here could it? If one believe that fiction, then they are going to be deceived. During the Obama administration, an Obama Executive Order (13603) follows this exact same model of controlling labor. Perhaps Americans should turn off their TV and read articles like this, because if the Coronavirus truly develops into an all out bioweapon (already done) that the CDC can, or will, control, millions of you are looking at your future.

Thanks to Obama, American slave labor, CHICOM style, is already the law. If and when the Coronavirus goe viral and there are critical labor shortages, slavery will follow. Families will be separated and the weak and unhealthy will perish if the virus doesn't kill them first.

According to Obama's EO 13603, the President, or the head of any federal agency that he shall designate, can conscript “persons of outstanding experience and ability without compensation,” in both “peacetime and times of national emergency.”  I can hear the Democratic Party supporters now as they will write to me and say, “Obama would never do that, you are drinking from the Kool-Aid, and just go read Snopes, everything will be OK”.  Well, here it is, you can read it for yourself.

Sec. 502.  Consultants.  The head of each agency otherwise delegated functions under this order is delegated the authority of the President under sections 710(b) and (c) of the Act, 50 U.S.C. App. 2160(b), (c), to employ persons of outstanding experience and ability without compensation and to employ experts, consultants, or organizations.  The authority delegated by this section may not be redelegated.

This means that Obama, and possibly any Democrat, if elected, his fellow communists, can seize any resource, property, or person at any time for any reason, including being able to force that person to perform assigned labor without being paid. There is only ONE word for forced, “uncompensated employment”. That would is slavery. Congratulations President Obama, you have effectively repealed the 13th Amendment to the Constitution. Section 601 of the act specifies, in part, how far the government can go in terms of making you their slave.

Did you notice that the military draft is separate and apart from civilian conscription? This is without a doubt, slave labor on American soil and the 13th Amendment has been turned on its head. Combine this with Medical martial law inside of FEMA camps, we will have quite the enslaved nation. I do not see President Trump doing this to the American people. Therefore, there will have to be a regime change!

I would suggest absolute and mass noncompliance. I never advocate for a civil war, but this would be an exception to my objections. I will not submit, will you?

The definition of moral depravity.

I do see Trump doing this, because it's exactly what he is doing. Did he cancel those Obama executive orders? He could have done that any day in the last three years, but you still can't see they simply painted the black globalist puppet Orange. It's all proper under corporate law invented by the Vatican, and instituted in the United States at the end of the Civil War. This Is a corporation, and we are all owned by it, and since we have been used as collateral against loans that never got paid back, we are legally slaves. The only difference now Is more people are going to start noticing. Thanks to Romans 13, most people will feel a moral obligation to comply this Satanic Empire of lies. This defines what moral depravity is.

The Chinese Slave Labor Response to the Coronavirus

Good luck trying to get anyone to take the 1st shot.

Frank is absolutely correct. The Act of 1871. Corporate States of America. We are under Maritime law, organic Constitution shelves for corporate Constitution.....