I am sympathetic to the plight of immigrants to an extent. However, when national security is in danger due to various aspects of the threat that immigration poses, I sing a decidedly different tune. We have within our political structure of government a group of radical subversives who are using immigration to overthrow our government.

Conversely, my father's side of the family escaped Germany as they were political undesirables. My father came to to America with many German relatives. Growing up, I was inundated with the virture of America's freedoms and made aware of the evils of socialism. My father's family encountered strong prejudice. They were often called "Nazi bastards" even though they were political refugees. Therefore, I have alway had great empathy for the hardships associated with what immigrants, both legal and illegal, go through when the come to America. Subsequently, I am more sympathetic toward immigrant causes than many of my fellow conservatives. No, I do not believe that we should permit illegal immigration. It produces an economic burden that this country cannot sustain. Further, it has been well documented that countless terrorist sleeper cells have entered our country posing as "helpless immigrants". This could prove to be our undoing as a nation. I think it is important to realize that many immigrants are duped into believing that they will be welcomed with open arms when they get here. And some really do need asylum because of conditions in their home country.. However, I believe that number of immigrants in danger represents a very small fraction of people who illegally cross our border. I also know that our immigrant system is broken and it should not take years to apply for a Green Card. I can clearly see how immigration in its present form is and will be used to continue to destroy this country. The immigration of today does contain many good people. However, immigration has been weaponized and our very cultural and Republic form democracy is being challenged. And as people like Paul Martin and myself have said many times, there are paramilitary forces embedded within the immigration movement that mean the United States great harm. As I write these words, cartels are taking over small, rural areas. MS-13 and ISIS are running rampant throughout our country. We are in a lot of trouble. As a result, we need to make the border crisis the number one issue as it is our major national security issue. Now that my bias is exposed, let's move forward to look at the existential threat facing all Americans and the role that the Democrats are embracing with regard to this threat.

President Trump, who favors legal immigration, recognizes the threats I have alluded to. However, his efforts to curtail illegal immigration, the kind that is actively trying to overthrow this country, are being blocked by liberal, activist judges who do not support the American rule of law.

I have extensive academic experience in US History with regard to the American Southwest and the South in general. Our history with our neighbors to the south, Mexico, has been morphed from what really took place in history to being presented as leftist, globalist propaganda. Both the indigenous Texas population and immigrants from the American south desired a separation from the corrupt and evil dictator, Santa Anna. Most of Texas wanted to be free of his tyranny. Therefore, when Mexico lost Texas, the did so because of Santa Anna's tyranny, not the imperialistic desires of the United States government. California went through a very similar localized revolution as well and American imperialism was not in evidence in either revolution. In fact, the United State government wanted nothing to do with Texas because they supported slavery and that separation was maintained for 10 years.

It is unfortunate that we are seeing extreme liberalism which seeks to expel "white Europeans" from the American Southwest and this radical type of thinking emanated from such liberal organizations as Cal Berkely and Chapman University. Today, the Democratic Party has begun to carry this radical torch. Briefly, let's take a look at this phenomenon.

I have written about this before as this plan to leave the United States is known in Mexico as the Reconquista movement meaning to reconquer what was forfeited from Mexico following the Mexican American war of the 1846 to 1848 in which the United States purchased land from the defeated Mexico. La Raza and its first cousin MECHA espouse Trotsky's principles for overthrowing all 8 state governments involved the taking of what once was Mexican land. The Reconquista movement is so controversial (i.e. the announced intention to expel all Whites from an 8 state area), that the plan has temporarily been reduced and morphed into a plan called Calexit, which used to be referred to at one-time as "YES, CALIFORNIA!" The Reconquista Movement once looked like this on paper: Today, these covert meetings indicate that the plan has been reduced to just California and the radicalized La Raza has taken a backseat, publicly, but has been instrumental in bringing together the criminal elements of this unholy organization. I think it likely that California is only a starting point and that this movement is going to spread far and wide. Look at the membership attendees, the state officials are from several states, not just California. This is a safe conclusion to make. Operational details are beginning to emerge at the time of this printing. For example, the CHICOM controleld CJNG cartel is invading rural America. the CHICOMS are promoting a turf war south of our border between the Sinaloa and CJNG cartels, both controlled by China. They are hoping the resulting violence will spill over the border to the United Stats and have a debilitating effect on this country. Many informants believe that athis will set off a TET style offensive whereby terrorist organizations, embedded within the United States,  will subsequently spring into action and create an unparalleled level of violence in America. Under the Kigali Principles, this could bring in CHICOM's ally the United Nations and they may interject themselves into the conflict and America's civil war will begin in earnest!

At the heart of this planned demise of America is the radical leadership of Democratic Party. AOC and the rest of the squad embrace this treason and sedition. Pete Buttilieg provides a case in point for Democratic complicity with this plot to bring down the country.

The Buttigieg treasonous moment caught the attention of the Republican National Committee’s Rapid Response Director Steve Guest, who shared the video on Twitter.

Pete Buttigieg with a valiant effort to take the lead in the “woke olympics.”

Buttigieg nods along in agreement with the claim that illegal immigrants are reclaiming stolen land in US. 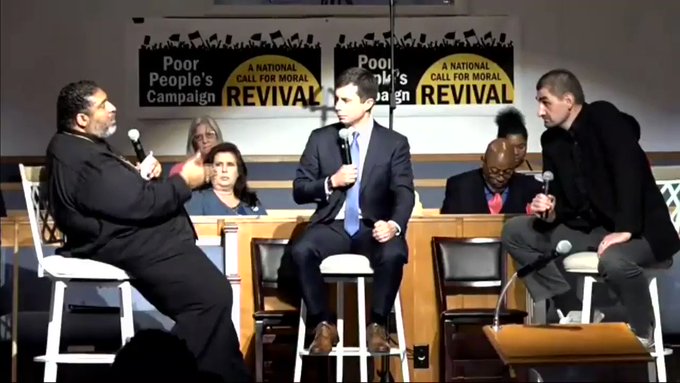 76 people are talking about this

ANY QUESTIONS AMERICA? WE ARE UNDER ATTACK FROM WITHIN AND WITHOUT THE COUNTRY.  THE 21 DEAD IN A RECENT MAJOR SHOOTOUT AT THE BORDER IS AN EXAMPLE OF WHAT IS BEING PRESENTED HERE.

I came across the following while filing and seemed timely: B.C. by Johnny Hart Ask me no questions, I'll tell you no truths, by Wiley. The political practice of lying is a sure sign of moral decay. The only thing thing worse, is when folks KNOW you're lying, and don't give a lick, either way. *Alas* When their apathy reaches this level, t'would be but a mere bagatelle, to vote into office "The FATHER of LIES-and go partying straight into Hell.

I don't want to ruin your day,BUT illegal immigrants aren't the problem in america,ITS THE LACK OF MEN..there are none,You children had a great country,and because you ignored your childrens freedom, getting drunk,watching sports,allowing those whores you claim are women to run the schools and government,and everything else,YOU'VE NOW LOSS YOUR COUNTRY AND YOUR FREEDOM,now you'll fight to the death OR BE TAKEN to a SLAVE FARM where you and your children will spend the last days of your life working for your slave masters,get over it...