As of March 13, 2020, the Government Has Unchecked and Unlimited Power Over Every Citizen

When I viewed the clip of Anthony Fauci's statements made on CNN's Jake Tapper's show this past weekend, I said, if Trump does not fire him on Monday morning, it will be clear evidence that the President is no longer in control of the Presidency and the Executive Branch of the Government. My statement was a gross understatement. Things have gone from bad to worse because you are no longer living in the United States and this article will make this point crystal clear.

On March 13, 2020, ABC News tweeted out the following news release. This announcement has profound implications for every citizen in this country. The rule of law is now gone and along with it, any Constitutional pretense for the protection of the civil liberties for the citizens of The United States

Pres. Donald Trump: "To unleash the full power of the federal government... I am officially declaring a national emergency." http://abcn.ws/2TYW18W 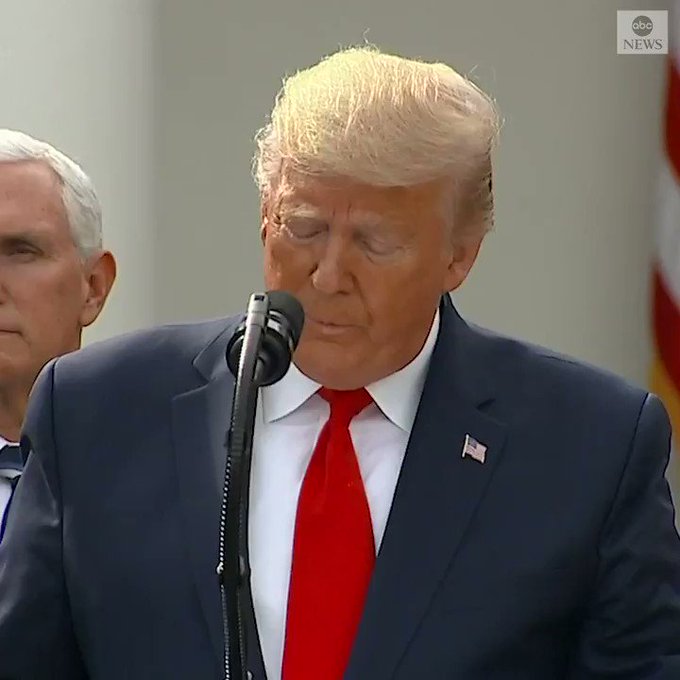 Please take note of the following discrepancies with regard to the "trappings" of a Presidential news conference on the Coronavirus. The first photo shows the flag, in its traditional display along with the Presidential seal on the podium from which the President speaks. However, after the National Emergency was declared on March 13, 2020, the podium took on a different look. The podium no longer displays the Presidential emblem, it merely says "The White House...Washington". Further, the flags in the background indicate a decided shift as well. Are we now under International law?

This is a two part series in which we will explore this question. In Part One, the purpose of this specific article contains two goals: (1) To illustrate that there has been a noteworthy change in the symbolic Presidential power that has been previously displayed by all Presidents in the modern era; and, (2) We will look at USC 42 and what it tells us about the loss of personal liberties and the installation of a dictatorship operating under the guise of protecting the public from a "pandemic".

These two photographs below demonstrate the change in the White House briefings following the declaration of a national emergency.

Editorial Use By The Common Sense Show

As dramatic as the change in the environment of the White House Press Room has been, the applicable statute, listed below, diplays an invocation pointing to a draconian change in the civil liberties of all Americans.

Here is what Trump just granted the Federal Government the power to do to you whatever is deemed necessary, with no statutory restrictions.

(a) Promulgation and enforcement by Surgeon General

The Surgeon General, with the approval of the Secretary, is authorized to make and enforce such regulations as in his judgment are necessary to prevent the introduction, transmission, or spread of communicable diseases from foreign countries into the States or possessions, or from one State or possession into any other State or possession. For purposes of carrying out and enforcing such regulations, the Surgeon General may provide for such inspection, fumigation, disinfection, sanitation, pest extermination, destruction of animals or articles found to be so infected or contaminated as to be sources of dangerous infection to human beings, and other measures, as in his judgment may be necessary.

Please note the language "...and other measures, as in his (Surgeon General) judgement may be necessary". Please note the specific phrase "... in his judgement, may be necessary".  This means the Surgeon General has carte blanche to do with you and your family ANYTHING he wants to with no statutory limits. Welcome to the land of Hitler, Mao and Stalin with absolute unchecked power. This declaration marks the total departure of the rule of law as there are no medical guidelines that could deny you your freedom. In the absence of qualified professional judgment, only political discretion remains. This reduces our laws to the level of "might makes right".

(d) Apprehension and examination of persons reasonably believed to be infected

(1) Regulations prescribed under this section may provide for the apprehension and examination of any individual reasonably believed to be infected with a communicable disease in a qualifying stage and (A) to be moving or about to move from a State to another State; or (B) to be a probable source of infection to individuals who, while infected with such disease in a qualifying stage, will be moving from a State to another State. Such regulations may provide that if upon examination any such individual is found to be infected, he may be detained for such time and in such manner as may be reasonably necessary. For purposes of this subsection, the term “State” includes, in addition to the several States, only the District of Columbia.

(2) For purposes of this subsection, the term “qualifying stage”, with respect to a communicable disease, means that such disease—(A)

is in a communicable stage; or

(B) Is in a precommunicable stage, if the disease would be likely to cause a public health emergency if transmitted to other individuals.

In other words, you may be imprisoned because SOMEONE (undefined as to who makes the determination) THINKS that you have become communicable. This law is written so vaguely, that the local dog catcher could judge you to be a health threat and they can do with you what they want to do with you for as long as they want. This law is a dictator's dream come true as the powers that be can now judge any undesirable or political opponent as being "potentially" unhealthy and dangerous, without any clearly defined criteria.

Are you concerned? If you are, "you ain't seen nothing yet," as the saying goes.

USC 42 brings in past Presidential Executive Orders and this is where the tyranny matches anything we might find in a country such as Communist China. This will be the topic of Part Two.

It is clear that we Americans are in uncharted territory. After the reader is exposed to Part Two in this series, it will become clear why only a fool will surrender their gun when that moment arrives. And the coming gun confiscation edict will not be issued by the US government, but by an international body.....

I will say that…

I will say that International body to be "THE UNITED NATIONS". I will wait for your next article to see if I am correct.

Good Call Dave, This is a…

Good Call Dave, This is a takeover of government and a loss of this great country without firing a shot. FEMA is in charge and has all authority over the constitution and can take what ever we have worked for all these years to even putting us in work camps. United Nations is the Police Force they will use to control us. As A Veteran, all I can say is "Lock & Load" The time we were worried about is here. New World Order Only Devine Intervention We Help To Save Us

Some old guys over at the nursing home told me that they were being held hostage and that the same thing was happening to Trump. NOTICE OF LEGAL RIGHT I DO NOT CONSENT TO ANY MEDICAL TREATMENT MY INFORMED CONSENT IS HERBY WITHHELD I DO NOT AUTHORIZE ANY PERSON AGENCY OR ORGANIZATION TO HAVE ANY CONCERN ABOUT MY HEALTH IN ANY WAY DO NOT PRESUME, ASSUME IMPLY OR DEEM MY INFORMED CONSENT TO HAVE ANY CONCERNS I REFUSE ALL VACCINES THIS NOTICE OF LEGAL RIGHT SUPERSEDES ANY CONSENT LIVING WILL ADVANCE MEDICAL OR HEALTH CARE DIRECTIVE OR OTHER COMMUNICATION I MAY HAVE MADE OR HEREAFTER MAKE PRINTED NAME, SIGNATURE<, DATE

Look a little further over the fence

For purposes of this subsection, the term “State” includes, in addition to the several States, only the District of Columbia.

can it be stopped by We the…

can it be stopped by We the people?

ALL this ends soon,BUT only for a select few,THE BRIDE,thank GOD only a few are at that level,THE rest of you get to go through the crap you caused,and I don't think any of you will survive it either...PRAY your in the zone that will be VAPORIZED....