I have had a number of conservations with a geologist friend who has been threatened and warned to be quiet. In fact, most geologists, at the university level, have been threatened in one way or another about maintaining their silence on the Cascadian Subduction Zone (CSZ). As Steve Quayle has pointed out (ie Branson GEN SIX Conference in September, 2019), the CSZ event at it is maximum could be at minimum a regional extinction level event. There are many possible trigger events, but the following is one that I have been aware of for almost two years and it is the one that my geologist source says would be the most deadly.

Overall, it seems very likely that many volcanos are awakening and that fault lines are on the move. Some think this is a precursor to an ice age and the a hyperdimensional physics model can best explain the science regarding what is happening now. The hyperdimensional physics model is one that will be explored in depth as a precursor to a CSZ event. Specific to this article, a prime catalyst to a CSZ event could very well lie in Hawaii and will be the focus of this article. Therefore, and regardless of the threat of an impending ice age, the planet is facing a real threat with regard to seismic activity and related volcanic activiity. Let's begin with Hawaii as a possible related and very deadly event.

Much Worse Than Believed

There are projections that show 1,000 foot waves hitting the west coast of the United States. In the interest of not risking the over-inflation of the threat, I chose this conservative, theat-assessment video, listed below, because it is among the most conservative in terms of demonstrating the potential threat posed by the Hawaiian volacano. And what is frightening is that the volcano on the big Island of Hawaii has been active on a much more active level in the past two years, thus increasing the possibility of following scenario in the video.

The following video shows a physics-based computer simulation of a Kilauea Flank Collapse landslide and Mega Tsunami. Local wave heights exceed 300 meters. Such events happen in Hawaii about every 200,000 years and as volatile as the situation is, these events remain in the realm of possiblity. Projections like 200,000 years, mean nothing if you are number 200,000! Again, when we realize that Hawaii has an extremely active volcano, on the move so to speak, right now!

In this scenario, all of the Hawaiian Islands are potentially at risk as well as most sea traffic in the Pacific. Plus, as my geologist source asserts, this could very well be a trigger event for the CSZ to go critical. However, one needs to realize that there are several potential catalysts for a CSZ event. This video is the most moderate projection of any of the one that I found on this topic.

The California Volcano Observatory (CVO) states that "7 of the state’s 19 volcanoes are at high threat, with a three of those at very high risk of imminent eruption".  The CVO further stated that, these California volcanoes posed a greater threat than Hawaiian volcanoes because they are blast volcanoes, which are more destructive. Some geologists are saying that the Hayward Bay fault line, which runs through the densely populated San Francisco Bay Area in California is more dangerous than the San Andreas.

Dr. Brian Hausback, a US geologist, told CBS: “If one of these volcanoes decides to erupt, it will catch the world’s attention. These areas have high populations, infrastructure like power plants, and high level of air traffic in the area,...very likely that one of them will erupt in the near future, it is due.” 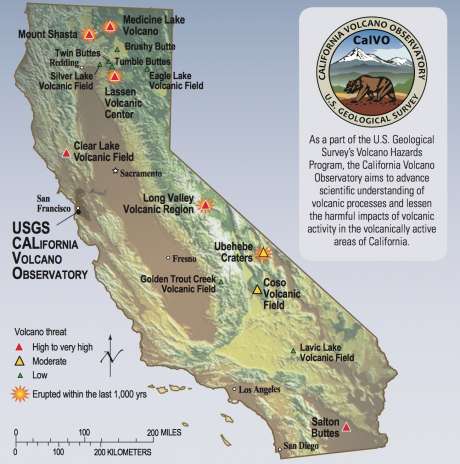 This is strong confirmation of what Steve Quayle has been asserting. Humanity is in a lot of trouble. The good people west I-5 are in grave danger. It is not a matter of if, but when. And as I am learning, there is not shortage of prime mover events when it comes to the CSZ.

In the next analysis of this dire threat, a hyperdimensional physics model will be applied to the so-called ring of fire. We may be looking at a much more complicated volcanic system than previously believed. This hyperdimensional model will assert that the recent New Zealand volcanic activity which killed 5 people is tied to the CSZ.  This will be the topic of the next article in this series.

Dave, I think it interesting you mentioned the hyper dimensional model in this article... I look forward to your future installment speaking to the HDM. I’ve done quite a bit of independent research into hyper dimensional physics... it explains a lot about how energy transfers from the sun to every planet in our solar system... and why most active volcanoes on Earth (obviously not all) are located around + or - 19.5 degrees north or south latitude of the equator (due to inverted double tetrahedrons drawn in the Earth... sides would touch at 19.5 degrees north and south). Anyway, a LOT goes on energy-wise in the hyper dimensional physics realm. Take care!

AMERICANS use the SAE,method of counting

EVERYONE wants to be a GOOD commie now days,they all want the commie metric system,OUR FATHER isn't a commie,even though america would make him one if he allowed it,NO..HES GOING TO BLOW THE ENTIRE ISLAND into pieces,everyone will die,USGS are nothing but a pack of lieing whores,their dates are all corrupted,OUR FATHER is going to give america what it wants though,BARACK OBAMA back to rule,hes a commie from way back,the people will celebrate his return to power,well for a little while...

Dave, some recent years ago, there were many succinct prophecies and visions and dreams that spoke of this: a tsunami will hit the west coast, then 3 weeks later the big one(s) .. major earthquakes that will finish the job. I cannot find the info- but will continue to look. this thing about HI may be it, i was thinking, ok, perhaps the cascadian quake tsunami then the CA earthquakes also read the duduman grandson's (3 bros have the same dream the same night of CA destruction) they were separated by distance... ignore at ones own peril

I have heard souces in washington talk about everything goes, esp. SEATLE, west of I5, which is heavy populated but relatvely (<20 miles) close to the coast line, in a cascadia big tusami. That fault ONLY runs down to N CA border. IN CA I5 is far inland,more than 70 miles & a huge area, & also not so huge tusami likely. Your article here says 19 volcanos in California. Northwest has what 6 or 7? CA big danger is the 2 inland faults, but not Tusami's. I am no expert, but think the two areas are distictly different and you seem to talk as if they are one. Only common factor is both on the ring of fire. What say experts?