The Race to Martial Law

Under martial law, the enforcer of government imposed totalitarianism can effectively eliminate all opposition t0 any administration of revolutionary movement. Under martial law, the ruling authority can eliminate all media opposition to to autocratic rule. Additionally, under martial law, despots can remain in power, perhaps indefinitely, and they are free to seize any and all assets. This would constitute a jubilee for the $44 trillion dollar Congresswoman, Ocasio-Cortez who never met a government takeover of private property that she did not approve of. Her Medicaid for all would destroy this country's economy. The pattern for the implementation of martial law follows three very distinct stages.

Stage One of Martial Law 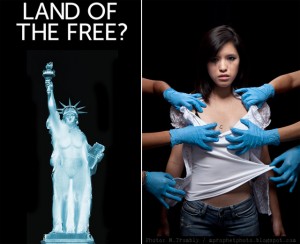 We need to thank the TSA. This is what we get for putting up with 2nd degree sexual assault and the invasion of our 4th Amendment rights.[/caption] Stage one of martial law consists of the gradual roll-out of government controls over citizen liberties. Travel is restricted through inland border checkpoints. The internal DHS VIPR programs which randomly search citizens at public events and on the highways. Citizens are conditioned by the TSA that they do not control or own their bodies as the flying public is molested by the TSA everyday in our nation’s airports in an extreme violation of our citizens Fourth Amendment rights. Stage one also begins to create an enemies list and we have already seen this in the MIAC report in which Christians, Ron Paul supporters, Second Amendment supporters, Libertarians and Constitutionalists have been branded as domestic terrorists. The enemies list has been created and will be acted upon at a future date. In Stage one, the government elevates itself above any pretense of constitutional liberties. America has been firmly under Stage one martial law governance since the events of 9/11. 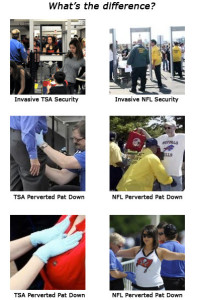 TSA and the National Football League. Both violate the 4th Amendment. Neither organization has caught even one terrorist.[/caption] Additionally, Deep State mouthpieces at CNN have labeled "old white men" as the problem with America. Although our citizens are exposed to increasing martial law practices, illegal aliens can cross our border with virtual impunity and commit violent crimes and escape the consequences of their bad acts. Increasingly, illegal aliens are given sanctuary, on the other hand, American citizens are given second degree sexual assault pat downs at the airports, as we see this police state mentality permeate our everyday lives. From drunk driving checkpoints, which presume everyone is guilty, to the lines at concerts, baseball games, basketball games, football games and any other public venue, everyone is a terrorist and subject to and Fourth Amendment searches in clear violation of the 4th Amendment. Google made devices such as Alexa spy on us. The NSA tracks our move and records our every word. Visio TV got spying on couples in their bedrooms.  Your cell phone tracks your every move as well. To paraphrase an old song, every move you make, every breath you take, we will be watching you. 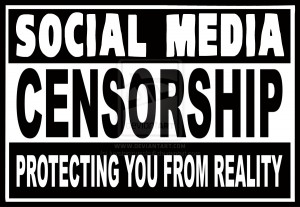 Section 230 of the "New NAFTA" betrays the Independent Media which supported Trump. Why would he betray his base or is he delegating too many of his decisions?

In Stage two, martial law implementation becomes obvious to all citizens except for the ones who invoke cognitive dissonance as a psychological coping mechanism. Stage two is marked by increasing and continued restrictions on travel, the loss of free speech, extreme censorship and the right to assemble to air grievances against the government. From shadow-banning to outright termination conservative websites and platforms have been under attack for espousing conservative values. Free speech is an offense in which people are being fired. At the urging of Democratic Socialist leaders such as Mad Maxine Waters, conservative politicians and White House staff have been harassed and threatened in public. And in some cases members of the Independent Media have been threatened as witnessed by what recently happened to Michael Savage as a presumed liberal orchestrated yet another round of intimidation against a conservative with the following email sent to a local restaurant? 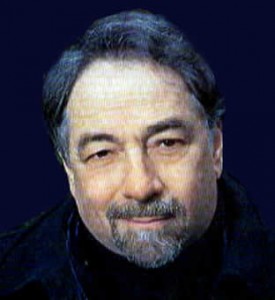 ...I DEMAND THAT YOU REFUSE TO ALLOW MICHAEL SAVAGE … IN YOUR F-ING RESTAURANT AGAIN. HE IS A RACIST WHITE SUPREMACIST PIECE OF SH— … DONT WANT TO LISTEN TO ME? WELL I GUESS YOURE ALL GONNA F—ING DIE THEN CUZ I AM WAITING FOR THE MOTHAF— AND I WILL WAIT AND WATCH YOUR F—ING BUSINESS AND WHEN I SEE HIM GO IN THERE IM GOING TO START SHOOTING EVERY BODY I CAN FIND.” ...

Michael Savage is now in hiding.   Stage two also witnesses the total loss of private property and free will in terms of choice of domicile (i.e. Agenda 21), choice of employment and exercising any form of political choice. In short, Stage two is characterized by creating a political caste system in which the legal rights of certain groups are set in place (i.e. NDAA, Executive Order 13603, etc). The MERS mortgage fraud inspired thievery of legitimate home titles and the MF Global theft of privately secured investment accounts are cases in point. Stage two is often preceded by a false flag attack (e.g. burning of the Reichstag) designed to create a perceived enemy which serves as the excuse for the encroachment of  “necessary” tyranny in a society in which “we must trade our liberty for security” approach to governance. It is difficult to argue the fact that martial law has progressed through at least two of the three stages.

Stage three martial law has given history some of its darkest days. Warrant-less detentions become common place in which suspected political dissidents are removed from society, usually in the middle of the night. In modern terminology, these would be referred to as the “Red list” tagged citizens who are detained and normally executed. These include outspoken preachers, outspoken talk show hosts, people who have any kind of history of civil disobedience. Extensive preparations have already been made for Stage Three. However, there is a question as to which side will be the first to implement martial law. The installment in this series will specifically address this issue.

I'm sorry, but if President Trump does not declare Martial Law, the "Rule Of Law" will never be restored, and the politicians, FBI/DOJ agents who have in fact committed treason, sedition, and espionage WILL NEVER see justice! In addition, if President Trump does not take advantage of declaring Martial Law, to stop the ongoing coup against the Republic, you can bet the democrats will if they take the presidency - they will do this, everyone continues to grossly underestimate what the democrats are capable of! Either way, civil war is unavoidable.
Craig Mouldey Sat, 01/05/2019 - 09:19

Which side will implement martial law? The same hand guides both dogs. It is the same thing.