The list of dangers related to the Cascadian Subduction Zone continues to grow my grim with each passing day. This article deals with the methane danger facing the West Coast. The effects for Cascadia are not made readily available. and I am certain this oversight is intentional for financial reasons (eg insurance and property values would be threatened). To gain a fuller understanding that methane accumulation off the West Coast poses, we will have to look at the aftermatch of the Gulf Oil Spill.

There is a study in the Journal of Geophysical Research: Solid Earth  which indicates that methane vaults were found on the Washington margin in 2009 and since that time, the number has grown exponentially. The original discovery was make about 30 miles from the coastline. The methane bubles are gejerated. The study revealed why the bubble plumes, all 1700 in the original discovery, appeared where they did. The appearance of the methane suggests that the cause is due to underlying geological activity. The methane emergence is due to fluid rise through the faults generated by the moving plates as one plate is moving under the Cascadia plate. Methane explosions are expected to become a major problem both at sea and on land. 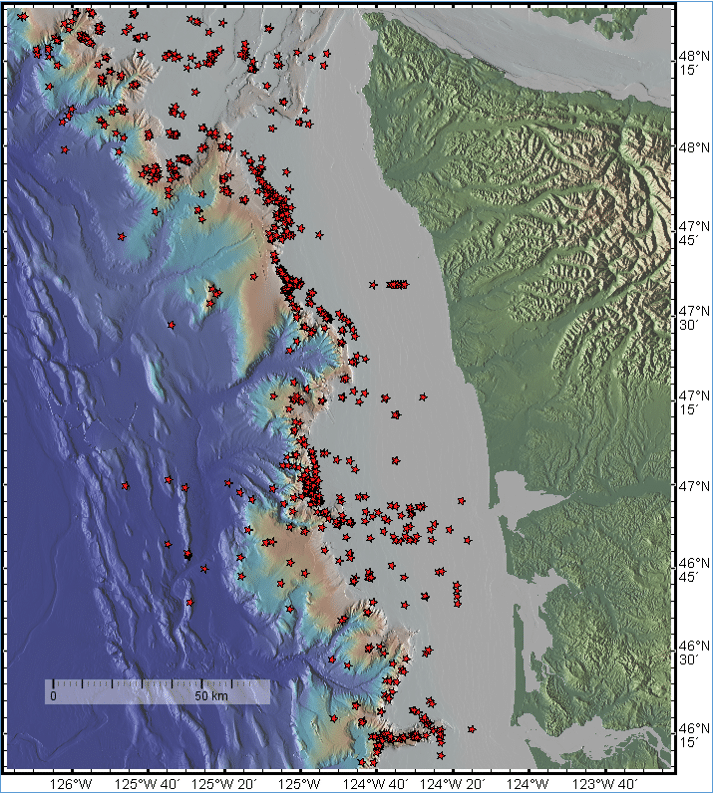 Red stars show locations of methane bubble plumes off Washington’s coast. The light gray is the shallow continental shelf, less than 175 yards below the surface. The blue is the deeper margin and abyssal plain. Image Credit: Dr. Johnson University of Washington

Many have asked me if there are going to be random explosions as a result of the increased presence of methane of the West Coast. The answer to that question lies in what happened in the aftermatch of the Gulf oil explosion.

The Gulf and the Methane Problem

The oil emanating from the seafloor contains about 40% methane, compared with about 5% found in typical oil deposits, said John Kessler, a Texas A&M University oceanographer who is studying the impact of methane from the spill. Kessler et al, in June of 2010, warned the public that methane was not going to dissipate on its own and that it would continue to increase and come ashore with unpredictable results. Merchant Marine expert, Captain Kelly Sweeney, while appearing on the CSS on July 10, 2010, made similar predictions in which he stated that he and many of his sources feared catastrophic methane explosions near several coastal cities which could be triggered by the right atmospheric conditions combined with the high levels of highly flammable methane. Sweeney also added that the methane cannot escape the water column that the oil is trapped in. The use of highly dangerous Corexit pushed the surface oil into the water column. Corexit does not dissipate oil spills. BP used this substance because they were being fined for every square mile that the oil covered. The use of Corexit limited their financial exposure but increased the risks to the people in the region. Dr. Wilma Subra has found that when the oil is pushed into the water column, the mass becomes devoid of oxygen. The only biological item that can survive is algae. This should get your attention. I am certain the readers have noticed the plethora of TV ads on algae as the next biofuel. Additionally, there is a second effect. When the oil is pushed into the water column, methane is concentrated and it never dissipates on its own as it grows in size and explosiveness.

John Boudreaux, director of the Assumption (LA.) Parish Office of Homeland Security and Emergency Preparedness has said there are concerns that the gas can build pressure under the clay layer that lies above their local aquifer. According to Boudreaux and geologists, once the aquifer reaches a pressure greater than 75 to 85 pounds per square inch, the clay layer might not hold back the accumulated gas and a set of major explosions could occur. Something unexpectedly triggered an emergency flare 40 feet high at the Bayou Corne, LA. The potential force of the explosion is frightening.

An explosion of this magnitude would be within the range of one and a half B83 thermonuclear (hydrogen) bombs, according to scientists.

In 2014, in the aftermatch of this discovery, Louisiana officials have suddenly and without comment banned outdoor fires. Such an accumulation was found in the Bayou Borne Community (pictured below). This became the first example that officials in Lousiana had with regard to massive methane explosions and collapsed surface land creating massive sink holes.

Ray Charles could see these dots connecting on the wall. The following is a live example of what Cascadia and points south running through the Baja are in for. In July 2010, BP found a mega pocket of highly pressurized methane gas in the Gulf of Mexico. The EPA and the President chose to ignore the publicized findings. Nobody in the mainstream media bothered to speculate as to the potential dangers. Publicly, the federal government did not answer the obvious questions, namely, where are the concentrations of the mega pocket of highly pressurized methane gas likely to migrate to and what would be the ultimate effect? It has been years since this discovery, and the public is expected to believe that BP and the government had no idea of the ramifications of the discovery of this magnitude. This is still a hidden and totally unpublicized danger.

As Gulf Coast investigator, Dr. Wilma Subra stated, that the oil/Corexit is in “…the air, the water table, the sea floor sediment,  the shallow surface of the beach, it is in the estuaries,… it is in the water column at 3,000-4,000 foot depth, the prevailing winds bring in the oil/Corexit to the shores and the substances are deposited inland. ..The environmental impact will last for generations.” The people of Bayou Corne, as well as at least 28 other Louisiana communities near the coast, are finding out how accurate Dr. Suber’s observations, offered in February of 2011, truly were accurate and prophetic.

A Case In Point

There are multiple reports of manhole covers blowing their top. There are also reports of people hearing underground explosions up and down the West Coast. One such event occurred in LA.

From KABC in LA:

An underground explosion in downtown Los Angeles popped out manhole covers and sending heavy smoke pouring out into the street.

The force of the explosion pushed up four manhole covers. Witnesses reported seeing heavy smoke coming out of the street in the 200 block of South Hill Street and several other nearby locations when the incident occurred at 12:30 p.m.

Firefighters responded and said there were no reports of injuries.

Elaine Balden of Pasadena was stopped at a red light downtown when she saw the explosion nearby.

"All of a sudden, the street explodes," she said. "Literally the manhole cover went sky high, flames coming out of the street. Very scary. I turned around."

About 50 residents were without power for a short time.

The cause of the explosion is under investigation....

There are more dangers yet to be revealed with regard to the Cascadian Subduction Zone.

Hey Dave, I lived in Louisiana for 34 years. I left in 2015. I was there and watch Bayou Corne sinkhole grow from a hole the size of a bucket to over 8 acres. Have no clue where it is at today all notifications have stopped. As far methane there are reports and actual videos of people having methane in their drinking water. On several ocassions streets have exploded in Kenner La. When it rains you can see bubbles coming out of the cracks in the streets. The gas will move in the direction of least resistance. One day it will find it's way out and there will be a major explosion!

I have been following yours and Steve Quayle's articles regarding the methane issues off the Pacific coast.Today there were articles online regarding "tube worms" washing up on the beach near Inverness, California. I believe this may be due to the presence of methane and lack of oxygen. But may we also consider the following article regarding the "worms of hell".https://hellandheaventestimonies.wordpress.com/2011/05/03/worms-in-hell/

I have been following yours and Steve Quayle's research regarding the increased methane off the West coast. Today there were articles online regarding a type of "tube worm" which are washing ashore near Inverness, California. These worms burrow on the ocean floor, but may be washing ashore due to the increase in methane and lack of oxygen. But, may we also consider the worms of hell as spoken of in the bible? According to Wikipedia, Giant tube worms, Riftia pachyptila,are commonly found in the intertidal and pelagic zone. They live over a mile deep and up to several miles deep on the floor of the Pacific Ocean near black smokers and can tolerate extremely high temperatures and sulfur levels. They can reach a length of 2.4 m