When the news broke about a large contingent of CHICOM troops were discovered in Canada, my initial reaction was to think that the troops, based upon a predetermined signal, would cross the border in force. I still that this is possible. However, I think the Chinese are first going to present themselves  inside of embedded forces within the United States (BLM and Antifa).

I base this assumption on the fact that the Chinese have a clear and definitive plan on how to gain control over a country. They are more subversive in their military strategy and are increasingly returning to the teachings of Sun Tzu, and they do not often employ a military force as the first option. Based on what I have seen in Ecuador, in the past year, the Chinese will use the tactic of infiltration to wreak continual havoc on America.

I have reason to believe that the Chinese will infiltrate protesters and join the ranks of Antifa as they done in places like Ecuador. I expect that they will even infiltrate, with the Democratic mayor's permission (eg Portland mayor, Ted Wheeler). I am predicting this for two reasons. First, I am told by Federal LEO's that they are expecting the CHICOMS to join Antifa and BLM along with other embedded terrorists. Second, this strategy matches what the Chinese are doing across all of Latin America, not just in Ecuador.

DHS is comingin force to Portland this weekend and they are doing so with great hesitation because of the great unkown. Will they meet Chinese forces embedded in the rands of these so-called social justic warriors?

The Infiltration Strategy Is Working In Ecuador

At some 16 million people, Ecuador’s entire population is smaller than that of Beijing – but despite its size, the country isn’t just attractive to investors from the Middle Kingdom, it has rung up a huge debt with China. Out of 15 countries in Latin America that have received Chinese funding, Ecuador is among the top three borrowers, with a total of 15 loans estimated at US$18.4 billion.

As of last year, only Brazil (US$28.9 billion) and Venezuela (US$67.2 billion) – both major players in the region – received more money from China than Ecuador, according to the China-Latin America Finance Database.

If one controls the economy, eventually, the military is under the control of the financiers and ultimately even the "elected" officials. In Ecuador, the people don;t like it and they protest. But their Chinese puppet government is unresponsive to the will of the people who want to expel the Chinese. 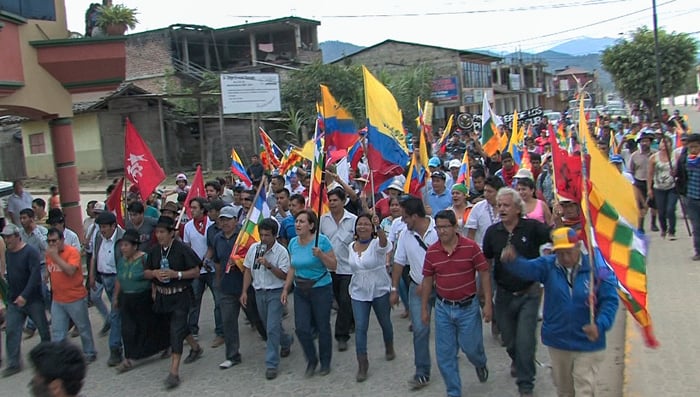 In a protest against the Mirador mine under the control of the Chinese, demonstrators walked 580km from Tundayme to Quito over 11 days in August 2015. Photo: Camara Shuar

The Chinese are locking down key South American countries with their population control technologies. The following paragraphs is merely a small sample size of what is happening in South America.

...New systems already being pioneered in China will link near-total surveillance – made possible by ubiquitous cameras – and access to location data in smartphones, as well as other information on virtually all aspects of a person, including telephone and digital communications, banking and credit card data and complementary commercial transactions, contracts, and public registries,” says the report, titled “The Future of Latin America and the Caribbean in the Context of the Rise of China”....

...Ecuador has bought the ECU-91123 system, designed and built by China National Electronics Import and Export Corp, to integrate its security and disaster relief agencies, including the police, fire services and paramedic units, into one platform...

Since the civil strife, bordering on Civil War emerged in Ecuador, the American mainstream media has refused to cover the highly volatile.

The potential for civil war has been present in Ecuador since last year. Here is a typrical letter I receive on this topic. This is representative communications I have received from American ex-pats living in Ecuador.

The Chinese forces are helping their puppet Ecuador government stay in power. The are putting Chinese into the military and mostly in the police departments. This allows the Chinese direct access to the protesters  and many have lost their lives.  They are beating and even murdering people who stand against them. It is so bad here that we are making plans to move back to the United States.

I am afraid that the Chinese soldiers could do the same in America as they are doing in Ecuador. What do you think?

These concerns are validated by the US embassy.

From the Embassy in Ecuador

Recent events in Ecuador serve as a reminder that crises may occur anywhere at any time.  The country is prone to natural disasters, such as earthquakes and volcano eruptions.  The U.S. Mission in Ecuador reminds U.S. citizens of the importance of preparing for potential crises before they occur and offers the following suggestions as you prepare.  Don’t delay – prepare today to be ready tomorrow!

Why Did we not hear about this?

It is abudantly clear that the Chinese, who have adopted the practice of infiltration in South Africa, to South America, will do the same here. Look for these Chinese troops to join the ranks of Antifa and BLM!

FYI: "This channel has no videos" at Common Sense Youtube.

Under the "Videos" tab at "The Common Sense Show" Youtube channel, I am not seeing any videos and get this message: "This channel has no videos." This is a link I have used daily for a long time. The channel seems to be still there (unlike others that have been taken down recently), but no videos showing. If I go to the "Home" tab there are about 10 videos shown, most 3 years old. FYI....

FYI: only seeing the ONE video that was just put up. No others.

Only seeing the one new video, "911 On Channel." Cannot see any other videos under the "Video" tab. This might be helpful: BeforeItsNews is running a story using one of your embedded videos, and IT IS WORKING OK as an embed. That means the videos are still around "somehow" functioning properly. IDEA: did "somehow" all of your videos get made "Private" "inadvertently" (cough-cough)?? I would check that. Can you log into your YT Dashboard and check their statuses? And make sure they are set to PUBLIC? I am an old IT guy. God bless.

FYI: If I search "Dave Hodges" on YT I get some of your videos.

The Corsi video from 17 hours ago came up, and I could click on it and play it. So, it seems the videos are just not populating your Channel itself. If the videos were marked "Private" as suggested in my prior comment, I don't believe they would be coming up in the YT search. So, YT is doing something, and will probably call it a computer glitch. Hope it works out....God bless.

Face it. Fallen angels are…

Face it. Fallen angels are in the highest positions in every country in the world, and working against us all and working WITH the evil powers that-be to destroy ever single country on the planet. We are all doomed.