The overwhelming numbers of armed patriots at the pro-2A rally in Richmond, Virginia has apparently caused Antifa terrorists and deep state operatives to back down from their plans to instigate staged violence for CNN’s cameras. While an estimated “tens of thousands” of armed patriots peacefully demonstrated at the Virginia capitol today, there were no reports of Antifa terrorists on the scene.

Antifa simply could not be found. It’s clear they decided to back down.

Remember that over the last several days, patriots have been urged to roll their cameras at all times in order to document the scene and catch Antifa terrorists or deep state operatives trying to instigate violence.

Patriots have also arrived armed, carrying literally thousands of rifles and pistols, sending a message to the deep state and its Antifa terrorism wing that violence will not be tolerated at this rally, despite the wishes of the radical Left and its anti-America media mouthpieces like NBC News or CNN.

Greg Reese, reporting for InfoWars.com, also said that he can’t even find any “anti-gunners” at the rally. Reporting from inside the FEMA cage that baby-killing Gov. Northam set up around the capitol grounds, Reese said the entire scene was dominated by pro-2A, peaceful protesters.

"I love this country."

"It's about the #2ndAmendment… It's not only a constitutional right issue, but it's also a civil right issue."

"As an African American on #MLKDay, it's critically important that we preserve the ability to defend ourselves" 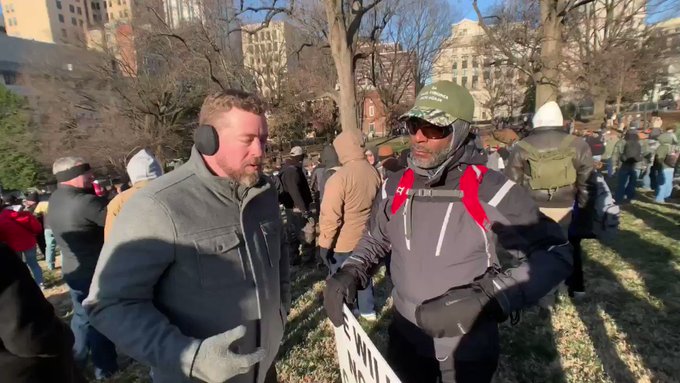 3,105 people are talking about this

“It totally blew up in their face,” Alex Jones said today. “The police are now estimating 50,000 people came in… they told companies to close all the parking garages so that people couldn’t find parking, but there were at least 50,000 people… standing room only. It was massive, and the real issue here is that everything Northam tried blew up in his face.”

Jones goes on to report:

They tried to create a stampede, tried to engineer something, it failed. They choked. They backed down. And now everybody’s going home with a major victory, and Northam has egg all over his face.

Listen to my podcast to understand the full details of how Leftists and deep state actors run false flag psyops on the American people:

So far, it looks like they’ve failed on this attempt, which shows the power of patriots showing up in huge numbers, armed with both rifles and cameras that are recording everything.

When the radical Left can’t carry out their schemes in secret — when they are forced to operate in broad daylight while tens of thousands of people are watching and recording video — they are unable to pull off their false flag operations. And that’s a huge victory for America, for liberty and for all of humanity.

Praise you Jesus, when the power of God is there and men who know how to be the men that God created them to be nothing can stop it! HALLELUJAH!

Out of the words MLK JR

WE SHALL OVERCOME,AND TODAY WAS THE DAY WE DID,WE SHOWED THAT GOOD AMERICAN PATRIOTS HAVING GUNS BRINGS PEACE,WE ARE NOT HERE TO FIGHT BUT PROTECT OUR FAMILY AND NEIGHBORS AGAINST TYRANNY

But the Revolutionary Communist Party, USA was there, and during their 10 mins of fame as they march declared " a force is coming for a real revolution"...…......