There are two separate stories to this article. One story is a standard story about how American ex-Special Forces living in Colorado are preparing to defend their turf against the Bolshevik revolutionary forces associated with the extremists of the Democratic Party, on behalf of the Deep State, and how they are in the process of a coup against President Trump, the American people and the Constitution. There is no question that we are living in a post-Constitutional period in our history. The second part of this article has to do with the most bizaree and obscure event I have ever seen on a TV game show and it is related to the first part of the story.

Paul Martin and myself have repeatedly revealed that the ex-special operations forces, an estimated 25,000 strong and heavily armed, are operating as a confederation, have specialized communications and they carry these devices in a faraday box. They are getting ready for the takeover. When the UN troops rear their ugly head. they will be encounted in Colorado by these ex-Special forces. The tactics will be largely guerrilla in nature. This is why the Gurkas are in Colorado.  Additionally, Paul and myself have repeatedly reported on foreign troops who have been brought in by the UN to counter this presence. These UN-serving troops would include the Gurkas (anti-guerrilla forces), the Russian Spetsnaz, Turkish troops, etc. In 2013, I published photos of the Spetsnaz and Gurkhas in Colorado on the CSS website. Here are two of these pictures 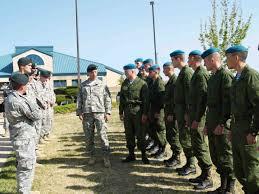 Last week, Paul Martin and myself did an interview about the ex-Special Operations forces in Colorado and the aforementioned groups that are there to oppose them. Here is that interview.

This is where the story turns bizarre. Sometimes, my wife records the show Jeopardy. Three nights ago, we were watching a pre-recorded show from December 1st. The Jeopardy answer described the Gurkhas under a category on military history. The three intelligent contestants had no idea the correct answer was Gurkhas. In fact, when Alex read the answer, both he and the three contestants appeared to be taken aback. I blurted out the answer immediately and my wife was stunned that I would know something so obscure. I quickly explained how I knew. In the time since the show, I thought my surprise would give way to accepting coincidence. Jeopardy is known for asking obscure questions, but this went way beyond obscure. I told Paul Martin last night and he was freaked out. Steve Quayle and I discussed it at lenght. Here is how I am choosing to rationalize the event. I agree with Steve that this was God's confirmation that my work with Paul in this area is spot on. Secondly, I think we are looking at a bit of slight of hand communication. We know that for sometime that certain factions of secret societies and various agencies have used media messages to communicate. Newspapers and radios participated in this during World War II. With the advent of TV, the practice spread there. I think there is no question that this element is also in play in this bizarre question appearing on Jeopardy. Specifically, I believe this is a message to the Gurkhas that is is time to prepare because the inevitable conflict is at hand.

It is safe to say that not 1 in 500,000 could have given that correct answer on Jeopardy related to the Gurkhas.

The following broadcast speaks to this event....

Over the years we in…

Over the years we in Connecticut has had in Haddam, CT up to 15,000 troops en masse at the justice academy. They have been seen in their uniforms wearing UN Blue patches on their right arms. It is safe to say that they are here waiting. These have all been Philippine National Police. We also have in Lincoln, New Hampshire thousands of Russian astrophysicists residing in a ginormous lodge on the main street the across from "Allene's" shopping center. We have also seen spetznaz troops at the Big Y Food Store on Route 1 on the CT shoreline in fatigues with their signatory striped undershirts. And also in Newtown, CT there are very burly crude men in town drinking on front porches in the middle of February yelling at people in Serbian. Continue

These very crude men have…

These very crude men have very long beards, look unkempt, and sit in the cold with nothing more than their pants and wife beater undershirts on. We had two bouts with them while driving thru newtown,ct. There are also large warehouse in our area that have very unusual activities. I once monitored one such building of about three million square feet. I watched the place for 72 hours only to see people in cars going in but not one vehicle leaving in a 72 hour period. Also, PLUMB ISLAND research facility off the coast of niantic abandoned it some years ago after bioweapons skating had escaped an contaminated all five levels. It was rumored that they moved to the bristol/meyer labs in wallingford ct and all of a sudden that was abandoned becaus

Of bioweapons leaks. If you…

Of bioweapons leaks. If you search things out there are plenty of things in your own backyard to give you the heebie jeebies. Don't ever take things for granted. Use your god given curiosity to advantage and start thinking out side the box. Enuf said you know the rollcall.