Sham impeachment vote proves all but two Democrats are complicit in treason against America, attempted political coup against a duly elected president

Since the 2016 election, Democrats, the deep state and the CIA-run fake news media have fabricated hoax after hoax to try to remove President Trump from office and overrule the votes of the people. They’ve fabricated fake “anonymous sources,” ginned up fake “dossier” documents, made false accusations, fabricated fake whistleblowers and have even publicized completely fabricated “transcripts” of President Trump’s conversation with the President of Ukraine, all in a malicious, coordinated attempt to achieve what they could not achieve through fair elections: The seizing of the White House and the nullification of the 2016 election.

Now they’ve taken their criminal conspiracy of treason to the next level, holding a vote in the House of Representatives to approve an impeachment process that Democrats now claim would end the secret staged hearings currently being held in below-ground bunkers, publicizing the hearings for the nation to see.

As part of this impeachment process, Democrats are now promising to allow Republicans to present evidence in defense of the President — something that treasonous weasel Adam Schiff has never allowed to date. Even with the new resolution, the entire process is rigged against President Trump. As Breitbart News explains:

Rep. Debbie Lesko (R-AZ), a House Freedom Caucus member, said this “resolution for a sham impeachment process is a farce.”

This resolution for a sham impeachment process is a farce:

Democrats are misleading the public once again. This does not open up the process, nor does it provide transparency. 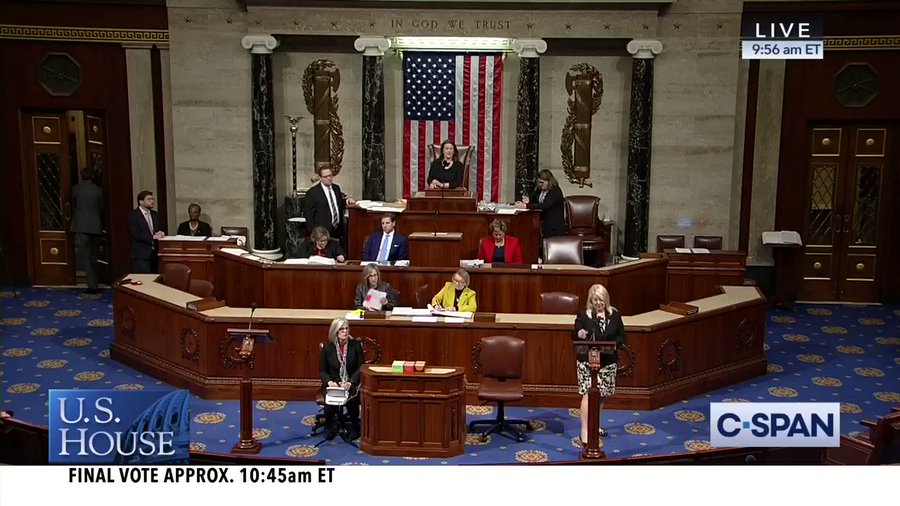 3,518 people are talking about this

The only reason Schiff has power at all, of course, is because tech giants like Google rigged the 2018 mid-term elections, censoring conservative channels while promoting “get out and vote” messages to progressives and liberals. With the help of ballot harvesting in California — and the do-nothing acquiescence of former AG Jeff Sessions — Democrats took the house in 2018 and have exploited that power to wage a criminal conspiracy coup against President Trump.

Never forget it’s Big Tech that put us in this position, which is why tech company CEOs like Jack Dorsey are complicit in treason and must face arrest and prosecution for their complicity in this attempted coup. The same goes for the lawless criminals running Google, YouTube and Facebook, all of whom have played an active role in silencing pro-Trump voices while rigging elections, which ironically is the very thing they all claim Trump should be impeached for attempting to carry out.

Laura Loomer, by the way, is running for Congress on a platform of promising to indict and prosecute Jack Dorsey for his crimes against the civil liberties of all Americans. Support Laura Loomer’s campaign at LauraLoomerForCongress.com.

The real criminals in America, in other words, are the anti-Trump forces who are conspiring to not just rig all future elections through widespread censorship and election meddling, but who are going all-out to overturn the vote of the people in the 2016 election. It has become apparent to them all that Democrats can’t beat Trump in a fair and free election, since the only candidates the Dems can seem to dredge up — Biden, Warren, Clinton, etc. — are tired, deranged hoaxers and political mafia queens. So instead of attempting to beat Trump at the polls, they’re trying to destroy him through a secret impeachment effort that violates every standard of due process and fairness.

But we would expect nothing less from the same Democrats that simultaneously demand the outright censorship of all conservative voices while claiming conservatives aren’t being censored at all. That’s how Democrats play the game: Everything is rigged, and they change all the rules as they see fit, always to disadvantage their political opponents while they seize power based on lies, disinformation, censorship and acts of treason.

Note the names of those who vote for impeachment, for these are the criminal traitors who must face arrest and prosecution

House Resolution 660 passed today with 232 votes, nearly all Democrats. That means we have 232 criminal traitors in the House of Representatives. Many of them are communists, by the way, and dozens of them are puppets of Communist China.

All of them are traitors who are actively seeking to overturn the will of the American people. They are also willing to thrust America into an all-out civil war, since that’s exactly what they will unleash if President Trump is impeached and convicted over a completely fabricated reason.

The real criminals in America are Barack Obama, Hillary Clinton, John Brennan, James Comey, Andrew McCabe, Nancy Pelosi and Adam Schiff, among others. Some of them will go to jail when the DOJ finally starts announcing indictments against deep state traitors. Others will flee the country to try to avoid prosecution.

James Comey has already publicly announced that he’s planning to flee to New Zealand, where extradition to the United States is a very high legal hurdle. Barack Obama, we’ve learned, has been offered political asylum by Canada. Andrew McCabe has already been indicted, but the indictment hasn’t been publicly released yet (it’s coming).

Democrats know that many of their malicious political operatives are about to be indicted and prosecuted, which is why they’re desperately pushing an aggressive timeline to remove Trump from office.

If they succeed in that illegal coup, they will immediately seek to remove V.P. Mike Pence, William Barr and even Kavanaugh and Gorsuch from the U.S. Supreme Court. There are no limits to Democrats’ quest for power, and they won’t stop until they are forced to do so, either by being arrested and handcuffed or halted by an uprising of law-abiding Americans who discover they’ve had enough of tyranny and treason from the swampland of Washington D.C.

Democrats hate democracy, and they despise the “deplorable” voters. This move to impeach Trump is nothing less than a coordinated, criminal effort to nullify the voters and retroactively steal the 2016 election. Note the names of those who have voted for this criminal coup attempt, for there are 232 members of the House of Representatives who are enemies of the people and who deserve to face life in prison for their crimes against this nation.

Stay informed and get prepared for a Democrat-run war on America. It now begins. Read NewsTarget.com for daily updates.

Even up here in Canada we…

Even up here in Canada we can see the criminality of what the Democrats are doing. That is, those Canadians who are not mesmerized by Trudeau. If Obama is indicted as a criminal conspirator and he attempts to come into Canada, there will be no end of resistance to a move like that. But don't put anything past Trudeau, he's a traitor who will do anything for people of colour, even criminals.

Leftist's and Right wing Plants are Soldiers for Globalist's Democratic World Order , Canada , America , all of Western Europe are in it , and for the last 30 years . This New World Order came straight out of New York City Manhattan , the biggest World dominate's on the planet , CFR , Trilateral , UN , Rockefeller's , World Trade , and hundreds of NGO's all for a One World ! We're all feeling it now .