Comey, Biden and Romney Issue Thinly Veiled Assassination Threats Against Trump on the Eve of His Dallas Visit

Today, on October 17th, the President travels to Dallas, the site of the 1963 murder of President John F. Kennedy. Because of recent and thinly veiled threats against the President, many are concerned for his safety. However, the Secret Service is nowhere to be found. Even the most ignorant among us could and should see the following as a direct threat to the President.

Look at the photo below. Does this look familiar? No, I don't mean the disgraced former FBI Director, James Comey. I am speaking about his toys on the floor. This is a photo that appeared in the New York Times. Please note the curvature of the toys made to look like Dealey Plaza. Before the coincidence theorists chime in, please note the grassy knoll depiction to the bottom right of the photo.

The New York Times article was entitled, James Comey Would Like to Help.  In the interview, Comey went on to say that he was dedicating his efforts, over the next 13 months to remove Trump from office. Why in the world, would Comey be interviewed in an article dedicated to the removal of President Trump and have a depiction of Dealey Plaza in the NYT photo. Also, we have to ask if this point was lost on the NTY reporter and editor for this story? Where is the Secret Service? Why isn't Comey being swat-teamed like Roger Stone was? Where is the President's security? Where is the Secret Service? Does this inaction inspire confidence in the President's security detail in Dallas on 10/17/2019?

In a stunning rendition, Comey is sitting about where Oswald allegedly would have been located on that fateful day in Dallas on November 23, 1963.

For the sake of reference, I put an photo of Dealey Plaza below this NYT photo. 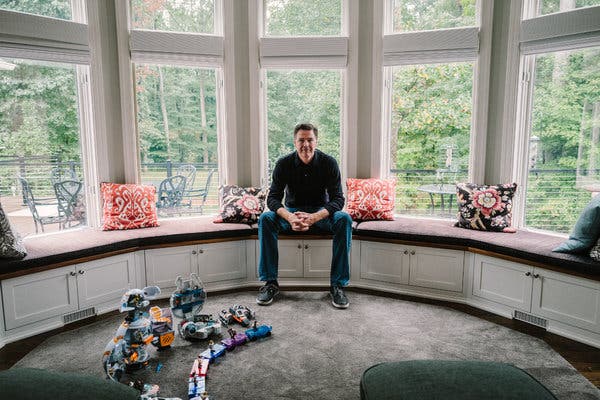 "James Comey plans to spend the next 13 months working to drive President Trump from power. Credit

Editorial and Fair Use

But wait, there is more to this Deep-State plot against President Trump. In the most recent Democratic Party Presidential Debate, Biden stated "...it is so important to remove this man from office. On the 17th.."  At that point, Biden muzzled himself. He know he had stumbled in what has become typic for Biden since he is obviously suffering from cognitive decline. If you want to see this stumble as Biden almost let the cat out of the proverbial bag, go to the X22 report. Go direct to 25:29 to hear this bumble and revelation about October 17th. Look at his face, he knew he screwed up. October 17th is the date of the President's visit to Dallas. Even the most ardent coincidence theorists are having trouble holding their cognitive dissonance together.

Previously, Mitt Romney attacked Trump as he has done so many times. The verbal attack is not the critical issue. This is highly revealing. Who was the last American president to be shot? It was Ronald Reagan. Who did the shooting? It was a man named John Hinckley. It is not as important that the public listen to the threats made against Donald Trump by Mitt Romney. But please look at the backdrop. It is from the Hinckley Institute. Yes indeed, this is from the same Hinckley family that John Hinckley is from, the last man to shoot a president. In light of the present day controversies, how do we not take this as a thinly veiled threat against the President of the United States?

And here are Hillary and Bill waiting in the wings for Donald Trump's demise so Hillary can rightfully claim her throne as US President. If an attempt is made on President Trump, will we believe that the Clinton's did not know? For the record and in the opinion of Dave Hodges of The Common Sense Show, I do not believe that Donald Trump will be assassinated in Dallas. However, there is no question in my mind that the President's visit to the site of JFK's murder is being used to send the President a very direct message. "Do what the globalists want, or else".  Where the hell is the Secret Service?

conspiracy to commit assassination of the president?

could one interpret this to be circumstantial evidence that these democrats want to bless the trumpster?

In reply to conspiracy to commit assassination of the president? by kevin coleman

thanks for the article, keep praying for divine protction as i am for President Trump, you can tell what a man stands for by who his enemies are. God Bless you all

Why the hell is he going to…

Why the hell is he going to Dallas? He's in on this. First of all, they wouldn't send him. They'd send one of his clones. They are all cloned.

"Comey, Biden and Romney Issue Thinly Veiled Assassination Threats Against Trump" I don't know. Is this legal to do this against the President? How about if Cheney, Ron Paul and Jeb Bush had done this against Obama? What then? Sounds like the FBI and Secret Service should be involved here. But then it is the Dems making threats so maybe the FBI and Secret Service stand down for their friends. Hmmm. Strange happenings.

Threats of assassination against a sitting President??? Where's the US Secret Service??? Or any other branch of LE??? They certainly won't hesitate to harass unemployed, minimally-employed Disabled Veterans, based on a false and whimsical phone call by *those hostile to the same (*Freemasons)...or an opinion (with no threat added) over a tapped phone! Once you PERSONALLY experience these things,you'll think twice about calling someone 'paranoid' when a government conspiracy (or any other conspiracy is involved)! I call upon the US Marines with their Special Ops to protect President Trump and preserve, protect and defend the US Constitution, as the USSS and other alphabet cops/agencies cannot be trusted to do the same!

My thoughts on their plan

When I first watched Biden's oopsie about the 17th, I immediately felt like it really wasn't an oops at all. I believe he meant to do that so everyone would THINK their plan was for today (the 17th) and POTUS would let his guard down after no attempt today sso they can get him when he least expects it. Maybe there's code in Biden's speech that we missed bed he had us all focusing on the oops. Lmk what you think please @Dave Btw, love your show and your hard work for We The People.

They ALWAYS throw out something for the media to focus on for several days when there's an event they don't want the public to hear about. IG's FISA report WAS set for the 18th (perhaps delayed further now?). The call-up of Marines RC takes effect 19th (to replace some units that have already been mobilized?). I've read in print and online years ago that the day after Kennedy was killed was when the Fed Res delivered their first shipments of NON silver certificate notes to the member banks. Even an "attempt" on Trump would be enough to make a smoke distraction in the West while Dems attack in the East.

We must arrest the Deep Stater's pronto! If we don't make the first move we may not have a second chance.