CAUGHT ON VIDEO: FBI and DHS attempt to recruit former Green Beret to infiltrate and spy on Oath Keepers, Proud Boys – but he recorded the conversation

Jeremy also attended the Stop the Steal protests in Washington DC on January 6. Jeremy joined the Oath Keepers in November and went to Washington DC to provide security at the many protests and rallies that week.

Earlier this month Jeremy Brown started speaking out about how the Department of Homeland Security (DHS) and FBI Joint Terrorism Task Force (JTTF) contacted him and attempted to recruit him to spy on patriots and everyday Americans. 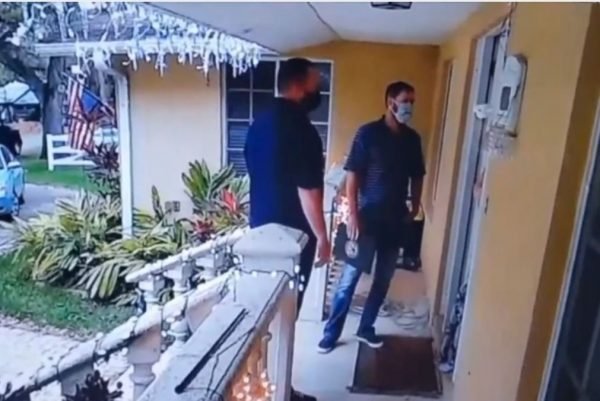 In December FBI agents contact Jeremy Brown at his home for “posting some things online.”

Jeremy released video surveillance of the FBI contacting him at his home. And Jeremy released an audio recording of his actual meetup with the FBI. Jeremy struggled for months about whether or not to go public with this information. But according to his Facebook page — “After listening to politicians and the FBI Director, Chris Wray, tell lie after bald-faced lie to the American People, he could not stay silent any longer.”

Jeremy decided his desire to protect and defend the American people and the TRUTH are more important than privacy or personal safety.

Earlier this month Jeremy joined Brandon Gray on Banned.TV to describe what happened to him after he joined the Oath Keepers in November.

Jeremy released video of his encounter with government officials when they came to his home. Jeremy also released audio of his meeting with the FBI at a local restaurant.

Jeremy explains in his recent video that the FBI called his cellphone and asked for a meeting after trying to contact him at his house. Jeremy then met with the FBI agents at a restaurant in Ybor City in December. He told Brandon Gray that 38 seconds into the intervew the FBI attempted to recruit him to spy on the Oath Keepers.

The Gateway Pundit spoke with Jeremy Brown last night. Jeremy is SAFE, but laying low and keeping on the move until he says he has “a full grasp on any fallout that is sure to result.”

Jeremy recorded his interview with the FBI in Florida. He recorded and released the entire conversation to BanThis.TV.

This is really shocking information. The FBI is working to infiltrate patriot groups of retired military personnel who take an oath to uphold the US Constitution.

This is happening in America! And this took place BEFORE January 6th.

This is a good one concerning the lateness of the hour, plus it shows how intricate a web has been spun by Satan and his minions.

I'm about halfway through…

I'm about halfway through the interview - fascinating AND infuriating stuff. I get mad hearing about how there are a lot of "good" agents among the rank & file - BS - if they were truly good, they'd either resign, or find a way to blow the whistle without endangering themselves & family.