Dr. Anthony Fauci is continuing Obama’s mission to cripple America and turn it into a vaccine police state

Former President Barack Obama had a mission for America: Destroy it!

And he pursued that “sleeper cell” mission for eight years, whipping up racial tensions, turning America against law enforcement, socializing the medical system and even allowing people like Joe Biden to transfer classified military secrets to China in exchange for financial kickbacks that were laundered through Ukraine.

As we’ve previously warned, Obama also allowed China to steal the Pentagon’s US military personnel records. He even allowed Iran to “capture” a US military drone and a Navy boat, all as part of a grand scheme to make sure Iran acquired US communications encryption hardware. If that weren’t enough, Obama then laundered billions of dollars through international banks to fund Iran’s nuclear weapons program, all while lying to America and claiming the “Iran nuclear deal” would block Iran’s nuclear ambitions (it did precisely the opposite, enabling the program and funding it).

See the full details of Obama’s treason in this broadcast video:

Barack Obama is a treasonous traitor who used his eight years in the White House to try to destroy America and enrich its enemies. Now, Dr. Anthony Fauci, who worked as one of the top-level operatives inside the NIH during the Obama years, is attempting to complete the work that Obama started.

In the last few days, Dr. Fauci has demanded that the entire nation remain locked down until every last infection is snuffed out. He wants the entire population to remain in quarantine lockdowns, in other words, until no more new infections are detected across the entire country. This is an impossible standard to achieve and would likely result in the whole country being locked down for a year or more, utterly destroying what’s left of the US economy.

It should be no surprise this was always part of the plan to destroy personal health freedom and roll out a medical police state run by vaccine zealots. Dr. Fauci is a puppetmaster for the vaccine industry and claims nothing can stop the virus except a non-existent vaccine. As part of the NIH, Dr. Fauci helped funnel hundreds of millions of dollars in taxpayer money into the biological weapons / vaccine industry (it’s the same industry, just two different faces). He’s currently downplaying hydroxychloroquine + zinc, a combination that has so far achieved an astonishing cure rate among coronavirus patients, because he’s trying to position his buddies in the vaccine industry to reap windfall profits from whatever vaccine they come up with, which will of course be heralded as the savior of humankind.

Until the vaccine is ready, Dr. Fauci wants to keep everybody locked in their homes, perhaps for an entire year to come. As Tucker Carlson correctly observers, this is tantamount to “national suicide.”

Tucker Carlson launches attack on Tony Fauci, but also says "to be clear we are not attacking Tony Fauci" 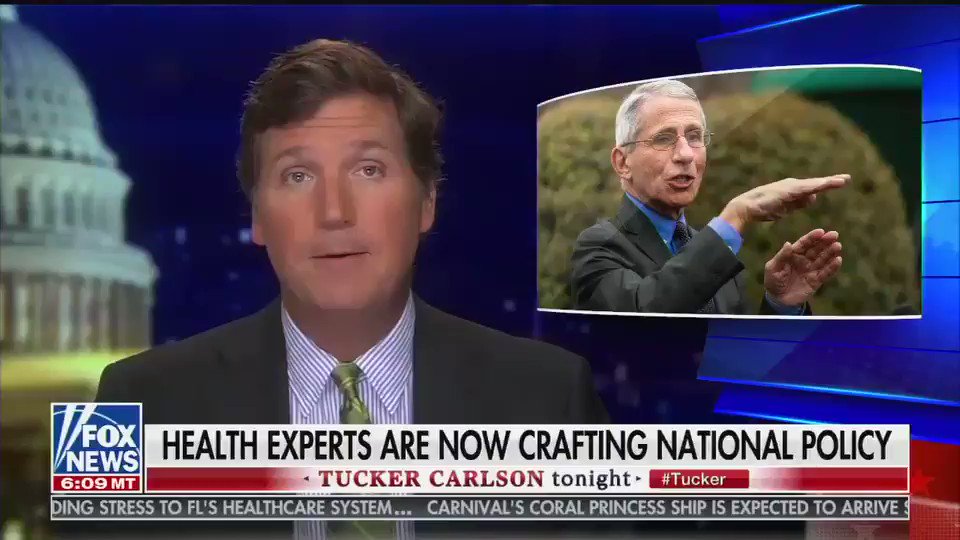 240 people are talking about this

Dr. Anthony Fauci is a dishonest vaccine propagandist who has previously claimed that MMR vaccines don’t cause encephalitis. This is, of course, a flat-out lie that Dr. Fauci continues to push in order to bury the truth about the dangers of vaccines. See this video clip:

Now, Dr. Fauci is spearheading the push for nationwide vaccines, infection tracking and surveillance, and seemingly endless house arrest, a form of nationwide imprisonment that will only be lifted when you are vaccinated (at gunpoint) by an authoritarian government run by the medical police state. This is the end game for the vaccine industry: Turn you into a prisoner until you submit to be jabbed with their dangerous toxins that could contain anything from heavy metals to aborted human fetal tissue.

Imprisoning Americans in their own homes is just another way to destroy America from within. While the nation might be able to recover from a 1-2 month lockdown that halts the exponential replication of the virus, it cannot survive the seemingly never-ending lockdowns that Dr. Fauci is recklessly demanding.

Dr. Fauci’s “vaccine greed” will be the destruction of America, if we are foolish enough to follow his catastrophic demands.

Dr. Fauci won’t dare mention zinc, vitamin D or anything that works, for fear the coronavirus might be stopped before the vaccine is available

Ultimately, Dr. Fauci is actively working to suppress information about lifesaving treatments and cures such as hydroxychloroquine and zinc, along with other immune-boosting nutritional solutions like vitamins C and D. Dr. Fauci doesn’t want the coronavirus to be defeated until the vaccine comes along, so low-cost treatments are being ignored or trashed. It’s all part of his narrative to shape the story line so that vaccines will be the hero and vaccine mandates will be forever enshrined in US law.

That’s the goal: Turn the United States into a Big Pharma-run medical police state, where anyone who opposes vaccines is criminalized, arrested and silenced, communist China style.

Dr. Fauci has a communist mindset. He’s a liar and a tyrant, and his ultimate goal here is to see the coronavirus inflict maximum pain, suffering and death across America so that he can engineer a “vaccine coup” and portray himself as the savior of the nation. Sadly, President Trump played right into Fauci’s hands by denying the severity of the virus for far too long, allowing it to replicate to the point where over a hundred thousand Americans might die this year alone. That plays into the contrived narrative of the vaccine zealots who see mass death as their greatest opportunity to push vaccine mandates and steamroll “anti-vaxxers” who question vaccine safety.

If we let the vaccine tyrants win, America will be lost and the people will be left to suffer and die in order to protect an industry of death and destruction (the vaccine industry).

What’s the solution? End the lockdowns with these four powerful tools:

I believe we could end the lockdowns by putting four simple things in place:

1) Everybody needs to wear a mask.

3) Hydroxychloroquine must be made widely available to treat serious patients. (And possibly Ivermectin.)

With those four things, we could simultaneously defeat the coronavirus while ending the lockdowns, all without waiting around for a vaccine that might prove more dangerous than the epidemic itself.

The globalists want America to be destroyed. They want the pandemic to spread, and they want maximum infections and deaths in the USA. To stop their agenda, we need everyone to take zinc and vitamin D while wearing masks (in public) and practicing safe social distancing. That’s how we end this as soon as possible and get America back to work and back on track.

Watch and share this important mini-documentary so that we can defeat the Obama-Fauci “death agenda” to destroy America and get this nation back on track.

Dr Fauci should be replaced as we are not getting correct data. Please can you check on the following? My friend who has a contact in the government did not want me to share this. But I want to know the truth. So with the expertise that you have please confirm with your experts. I was told that several Chinese were arrested in Ma with vials of the Corona virus in their socks. Is this why NY and NJ have high infection rates? Sincerely, Elizabeth Misa

Dr. Zelensky exposes Fauci for committing a crime of the century

FAUCI MUST BE FIRED. New York Dr. Vladimir Zelensky: “ANYONE (Dr. FAUCI, pharmacy boards, or state governors…) WHO BLOCKS ACCESS to the drug Hydroxychloroquine is committing A CRIME OF THE CENTURY.” In a video, Drs. Zelensky (with Karladine Graves, Jerome Corsi PhD, and Craig), presented his WARTIME Covid-19 Out-Patient Regimen, with which he treated 900 Covid-19 patients with a 99.9% success rate. Supporters include a U.S. school of medicine, the WH, the government of Ukraine and Israel’s Minister of Health. 3 drugs: Hydroxychloroquine, Azithromycin, Zinc sulfate; 4 pills/day for 5 days, 0 death, for only $12! Dr. Fauci failed to confirm Hydroxychloroquine works, pushed long studies, and plugged vaccines for hi$ vaccine indu$try friend$’!

Where were the patriot pastors and parishioners? Were there any in America who were doing practice drills after church services? That ship has sailed the harbor now re lock down, hasn't it? Couldn't give tithes sans government involvement? Give an inch, take a mile. Tragic. Galling.

Dr. Karladine Graves advocates allowing free and voluntary access to Hydroxychloroquine AND Zinc [sulfate] to all first responders who support society’s infrastructure as well as to the elderly at nursing homes. Dr. Graves takes a PREVENTATIVE approach (or “PREEMPTIVE” as Dr. Zelensky calls it) to protecting the police and firefighters, doctors and nurses, all healthcare workers and hospital personnel, truckers, garbage collectors, etc. Hydroxychloroquine 200 mg the first 1-2 days, thereafter 1x a week; and with Zinc 1x a week. Dr. Graves also does antibody testing (IgM and IgD), which can detect IgM (the body’s first response at the onset of Covid-19) and identify asymptomatic but contagious Covid-19 carriers BEFORE they test positive.

Correction--Dr. Zelensky exposes Fauci ...a crime of the century

Sorry for the misquote above: Dr. Vladimir Zelensky: “ANYONE [Dr. FAUCI, pharmacy boards who pressure state governors, or state governors…] WHO BLOCKS ACCESS to the drug Hydroxychloroquine is committing A CRIME AGAINST HUMANITY.”

There is a new State Farm…

There is a new State Farm commercial that is running here in Brighton, Colorado. It says we are in, "The New Normal". Every time I hear it, I keep hearing that smug Obama talking about "The New Normal" he worked so hard to bring upon America. They wanted the end of America as we knew it, and the Obama Adminstration was succeeding. Clinton wasn't elected, we received a Heavenly reprieve. Trump was trying like hell to revive us, but damn, these bastards have blocked and thwarted his every move. This will continue until Trump is gone and the NWO is in control. What is the answer?

Fire Fauci for his Operation Zero GNP against America

Conflict of interest! EITHER Dr. Fauci serves the vaccine industry OR America, but NOT BOTH! His EXTENDED stay-at-home policy in response to our China Virus epidemic is like a torpedo fired to sink America. Since the end of the Impeachment Show when Schiff-Nadler-Pelosi got booed off the stage with eggs and tomatoes, Fauci has followed that act with his own Operation Zero GNP, the ultimate goal being to destroy President Trump’s hard-earned legacy and his chances of reelection. I voted for Donald Trump, not Fauci, to lead our country. Whatever Fauci says is true is FALSE. Whatever he recommends for America will have HORRIBLE consequences and HURT President Trump’s 2nd-term prospects. He is IRRELEVANT, he’s a LIABILITY, so fire him NOW.