Jade Helm 16 was one of the most egregious acts ever perpetrated against the American people by the Obama administration. They actively practiced putting down a civilian rebellion and imposing martial law. They also used crisis actors to play ex-American military to play the role of guerilla chieftains in their rebellion against a liberal establishment that was running the United States.

In one of the great coincidences and ironies in my journalistic career, I was writing an article on ow a Jade Helm 19 will likely be happening soon these in America as it is time for a “tune-up”. Now the drill we are going to discuss is not called Jade Helm 19, it called Robin Sage. But a rose is a rose by another name.

Little did I know when I started writing, Jade Helm 19 was already in the works. In fact, on August 13th, I produced a video which stated that the CCP was going to come into Hong Kong and use Jade Helm 16 tactics to suppress the rioting from the local citizenry that wanted freedom. In the video (see below), I went on to make the point that when Trump leaves office, for whatever reason, these tactics, rehearsed in 2016, would be turned upon conservative protesters.

Yesterday, on August 21st, I received notification of a Jade Helm 16 drill was going to be conducted in21 counties in North Carolina commencing on August 30, 2019 and lasting until September 12th. The notifications regarding the new Jade Helm rill came to me via a federal law enforcement official and Steve Quayle. Ironically, these notifications came in at the exact same time as I was writing this article on Jade Helm 16. First, here is the video I produced on August 13th regarding Jade Helm.

In the original Jade Helm 16 drill, one can see from the following ad, that the Obama administration was anticipating an active military rebellion against the Leftist authority and this was their rehearsal for this event, which was to supposedly have taken place during the Hillary Presidency, in which (thank God) never occurred. 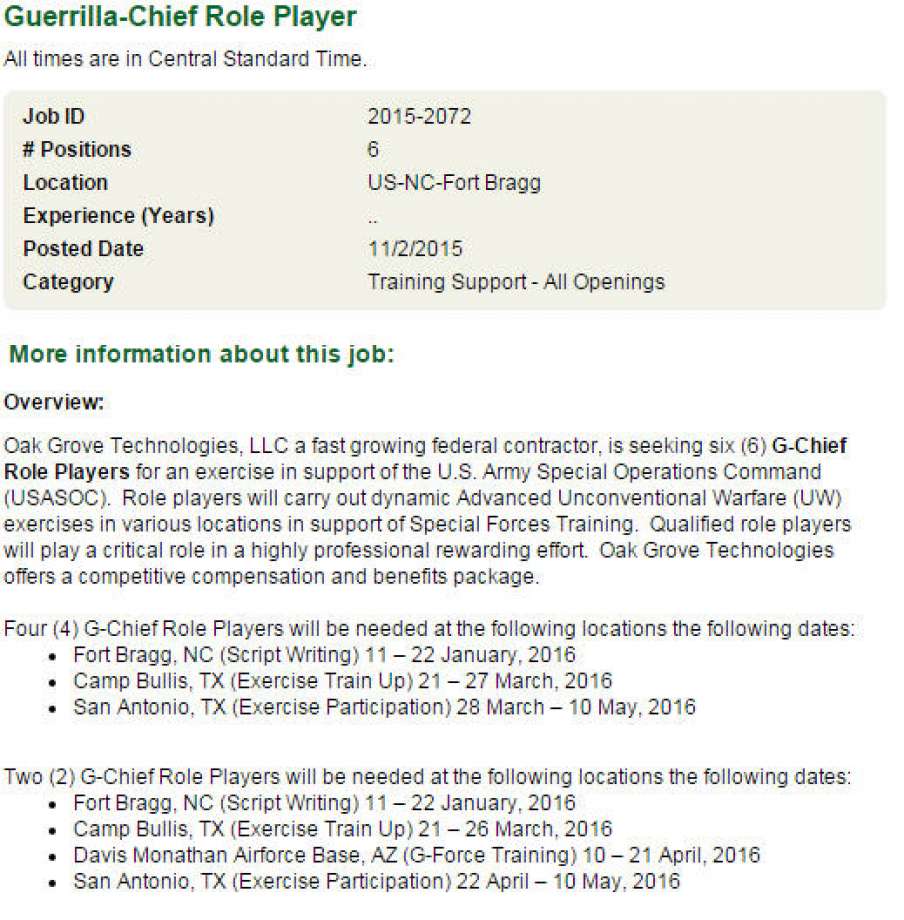 The parallels are stunning. Although I did not see an ad similar to the one displayed above for crisis actors, the Charlotte Observer did quote DOD officials as saying that "students" would be used as guerilla soldiers and they would be dressed in civilian clothes and could be identified by an armband. Why not just put them in Antifa clothing. Ft. Bragg, as in 2016, was involved in this drill. In short, this drill is about training special forces operatives to be able to put down a civilian insurrection, an attempted civil war.

Both sets of drills involve the local community and the use of live ammo (blanks).. It was clear from the photos of the drill, guerilla tactics were being employed by the military to combat the guerilla tactics of the dissident force.

There is a huge difference between the drill in 2016 and the one in 2019. The good guys and the bad guys have flipped sides. In Jade Helm 16, the good guys were the "disaffected" former military that were acting as guerilla chieftains who were opposing the military forces of a Leftist regime. This time, the extreme Leftists are the guerillas.

I have been told by two confidential informants that federal marshalls and SWAT teams are in Southern California to track MS-13 members. This should be considered the application of Jade Helm 19. Clearly the Trump administration. In a conversation with the President of the New California Movement, Paul Preston, he confirmed this development as well.

Clearly the Trump administration is anticipating an armed rebellion from Leftist forces is he wins the 2020 election. This makes sense because the Democrats are too disorganized and to divided to win the Presidency, so long as conservative remain politically active and vote in large in numbers. Because the Democrats cannot win the Presidency, they tried Alinsky's Rules for Radicals. They have used the Russian-Collusion-Delusion. strategy which failed. They have turned their attention away from Russia to racism and promoting the belief that the President is mentally ill and they can remove him on the 25h Amendment disability clause. All of these strategies have failed, or will fail. What are the Democrats left with? At this point, the Leftists, as manifested in the Democratic Party will start a civil war. Their forces are formidable and include border infiltrators (eg ISIS, drug cartel members, embedded Chinese soldiers, MS-13) and domestic terror groups such as Antifa. Jade Helm 19 is about dealing with these forces. Make no mistake about it, this is martial law and it will impact every person in the country. Violence will be frequent, unpredictable and very random. Put guns in the hands of the Portland Antifa rioters and one should get the idea of what is coming and why martial law will be necessary. On our Wednesday morning talk show, co-host Paul Martin called for Trump to initiate martial law. Paul is not going to have to wait very long to have his wish fulfilled. .

I feel a lot better about Trump now, than I have in a long time. He has stated that he will not enforce universal gun registration. This cuts a lot of meat out of the Red Flag laws. Clearly, the President was only telling the media and the oppositional what they wanted to hear.

Through this Jade Helm 19 drill, formally called Robin Sage, Trump is preparing to deal with the paramilitary terrorists already in the country. Please also note that Trump has been meeting with advisers about Afghanistan. I believe Trumps intent to leave Afghanistan is because the troops are going to be needed to put down the Leftist revolution when it begins. Now, more than ever America, it is time to be fully prepped. As the 2020 election approaches and if it looks like Trump will win, the Left will turn parts of this country, mostly "blue" cities into 1992 Bosnia. At minimum, you will need 6 months of food, water, guns, ammo, natural health care medicine to substitute for the prescriptions that people will not be able to maintain.

sorry dave i cant swallow this remark trump said yesterday! he is the chosen one? is that giving Jesus the middle finger? is trump god? do you support the third temple movement? why do we need a temple now that we have Jesus? is trump a banking asset? hillary could never get red flag laws off the table but yet another NDAA sanctioned false flag shooting in el paso no video kill team dressed in black and nothing? much like Vegas all under trumps fbi? who is getting the wool pulled over their eyes?

Robin Sage is the qualifying exercise for the Specil Forces in the "Q" course to become green berets! It happens every year! They coordinate with the counties so no more soldiers get shot by deputies like a few years ago! They simulating the SF working with guerillas to tle back their country. These SFers will be the ones to help us. Google Robin Sage SF Fort Bragg and read. I have participated 3 times as s "G."

YOU GUYS really should listen to the LORD,YOUR NEXT PRESIDENT WILL BE OBAMA..The son of perdition,and you'll all be wishing it was hillary,she couldn't get away with haft of what obama will do,And yes the round ups will begin after hes president again,as a matter of fact,ALL OF YOU they don't catch right away,WILL HAVE A $5,000 dollar reward on your head,ALL christians will,OH and they have lots of great things planned for you too,although you won't think so..OH,and TRUMP,HILLARY and OBAMA are best of friends,thats a warning to all of you who they really are.....

Never have I worried about…

Never have I worried about the peaceful transfer of power from one election to the next in my lifetime until now. People have become unhinged, angry, irate, wrathful, belligerent, bellicose - the thin veneer of civility is quickly leaving our society. Civil discourse is dead. Truthtellers and Peacekeepers are mocked and ridiculed. It is becoming increasingly dangerous to point out illogical conclusions, untruthful reasoning and outright lies and prevarications. Truth is buried. Indoctrination is the Rule of the Land now. I do not wish for violence to overtake this land, however, our nation has crossed the Rubicon. We are polarized and divided as we were in 1860. People will heed the bell ringers, if they are smart...

Trump is a deceiver

Don't be fooled by what you are seeing as the division of right and left/conservative and liberal - the elites are controlling ALL of this. Trump is playing out his part and has fallen for the lies of his father (the father of lies). Trump is NOT a man of God. He serves mammon. Turn to Jesus Christ- He is The Way, The Truth, and The Life. NOT Trump!!!!

Jade Helm 19 is a step in the right direction! Note this date—Effective 8-15-2019—we have a new Director of National Intelligence (DNI)—Vice Admiral Joseph Maguire, 36 years in the Navy and 34 years as Navy Seal. This new DNI effective date is 15 days before Jade Helm 19 drill commences in N.C. on August 30, 2019. In his DNI pick, “President Trump has chosen MILITARY over the CIA and CIVILIAN.” Dr. Steve Pieczenik, who fully supports this appointment, thinks “President Trump is a genius” for picking the loyal and trustworthy Vice Adm. Joseph Maguire to serve as the new DNI, over both CIA Sue Gordon and ‘civilian’ Dan Coats. Sue Gordon is a 27-year career CIA official, and exiting DNI Dan Coats is a former senator. Bravo, Mr. President!