President Trump has just made sure #DontTestDontTell will now go into overdrive. A so-called “new approach to testing” announced by Trump and the HHS yesterday relies on avoiding testing anyone until they show obvious symptoms.

This isn’t the gold standard of testing. It’s more like the turd standard.

Obviously, when dealing with a deadly infectious disease that has a multi-week incubation period during which asymptomatic carriers can spread the infection to others, you have to test people who don’t yet show symptoms. But Trump and the HHS have announced that won’t be happening. Trump repeated it several times in yesterday’s national emergency declaration announcement: “People who don’t have symptoms don’t need to be tested.”

What’s the strategy behind this medical lunacy, you ask? It’s a way to keep the number of detected infections artificially low. In other words, it’s the same trick communist China played on the world all along. Now the US government is borrowing that insane deception page right out of communist China.

It is impossible to stop this disease if you don’t test people who are asymptomatic carriers. Trump’s announcement is essentially a kind of suicide pact for America, and it’s being endorsed by all the pharmaceutical companies who think they stand to make a killing from all the drugs and vaccines people will need as the hospitals get completely overrun in 8 weeks or less. 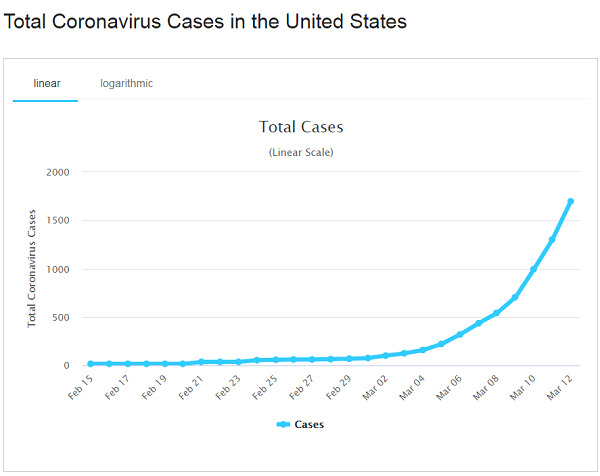 One expert thinks 500,000 Americans may already be infected

One health expert, Dr. Marty Makary, says there may already be 500,000 Americans infected right now. The reason we don’t know the exact number yet is because coronavirus testing is still practically non-existent in the United States, thanks to the criminal negligence of the CDC (and government incompetence in general).

My own estimates based on the “Adams model” pandemic projection system, now in revision 3, estimates that there are right now 23,000 actively infected people in the United States.

According to the model, which now assumes a 50% social distancing suppression factor, by the end of March there will be 93,000 Americans infected and over 500 dead.

Typically, my own projections have consistently turned out to be too low, even though many readers can’t psychologically handle the projections when they first see them. For example, my model is currently projecting hundreds of thousands of Americans DEAD by July 4th. Even with a 50% social distancing factor in place… Yet to this day, most Americans still can’t imagine that happening because they simply aren’t psychologically able to handle the thought of it.

That’s why a lockdown is probably coming to the USA, specifically in certain regions such as Seattle, NYC, Boston, San Franshitsco, etc. If you’re not yet prepared to “shelter in place” for 60 days or more, you may end up failing to survive what’s coming.

So, I had a friend from Central California recommend . .

There church was online only today - good decision! They had on the program a couple scientists from the jr college and university in Merced. It seemed that the science was correct for the most part, based on what Mike Adams has been saying. There is just one issue I have - after watching their service - I feel like I have taken a couple sedatives, everything is going to be just fine everything is going to okay! Don't worry be happy! I commend their approach, but if things get really 'hooky over the next couple of months or more that sedative is just not going to be enough! I have decided to not critize what they did to my friend, maybe just indicate there is more to the situation than the virus.

I have always thought, that there was more to this virus than meets the eye ! I my opinion ! Not testing people, that show no signs of being infected is simply a way too spread the virus throughout the country. Shame on you Trump and our government!!! The Dems and Reps. They send they would sink and burn contents! Well, here we go. This is the purge of America ! Just like all the wars that ever end, simply to kill off the youth of this nation, that are willing to fight and die for this country. What a brainwashing they have done to our people I could go on and on, but I think you get my drift. This is the purge of America GOD and big GOV will not be there for you ! A Vietnam Veteran 68/69