TYRANNY ALERT: Trump signs executive order banning “hoarding” of medical supplies as AG Barr promises “a knock on the door” for those sitting on commercial quantities of things the government wants to steal

President Donald Trump has made it clear he’s going to use the force of government to acquire supplies for protecting healthcare workers and patients as the Wuhan coronavirus (COVID-19) outbreak worsens.

On Monday the president signed an executive order banning “hoarding” of essential medical supplies like masks, gloves and gowns currently in short supply at hospitals around the country.

These items, known as personal protective equipment, or PPE, are crucial in preventing the spread of the virus to those who are charged with taking care of us at a time when some experts are projecting hundreds of thousands of coronavirus hospitalizations and deaths.

Editor’s note: The Trump administration is now criminalizing inventory of medical supplies. For this very reason, we are no longer importing such items and making them available to America, given that we can now be accused of “hoarding” for merely having inventory in our warehouse. This executive order is an attack on freedom and will dissuade importers from offering medical equipment in the United States, having exactly the opposite effect of what’s intended. This is nothing short of government tyranny and theft of supplies by a government that failed to prepare, so now it’s punishing the private sector for its own incompetence.

“This sends a strong message – we will not let those hoarding vital supplies and price gougers to harm the health of America in this hour of need,” White House press secretary Stephanie Grisham said in a statement.

President @realDonaldTrump just signed an EO to prevent hoarding & price gouging of supplies needed in our war against the #Coronavirus. This sends a strong message – we will not let those hoarding vital supplies & price gougers to harm the health of America in this hour of need. 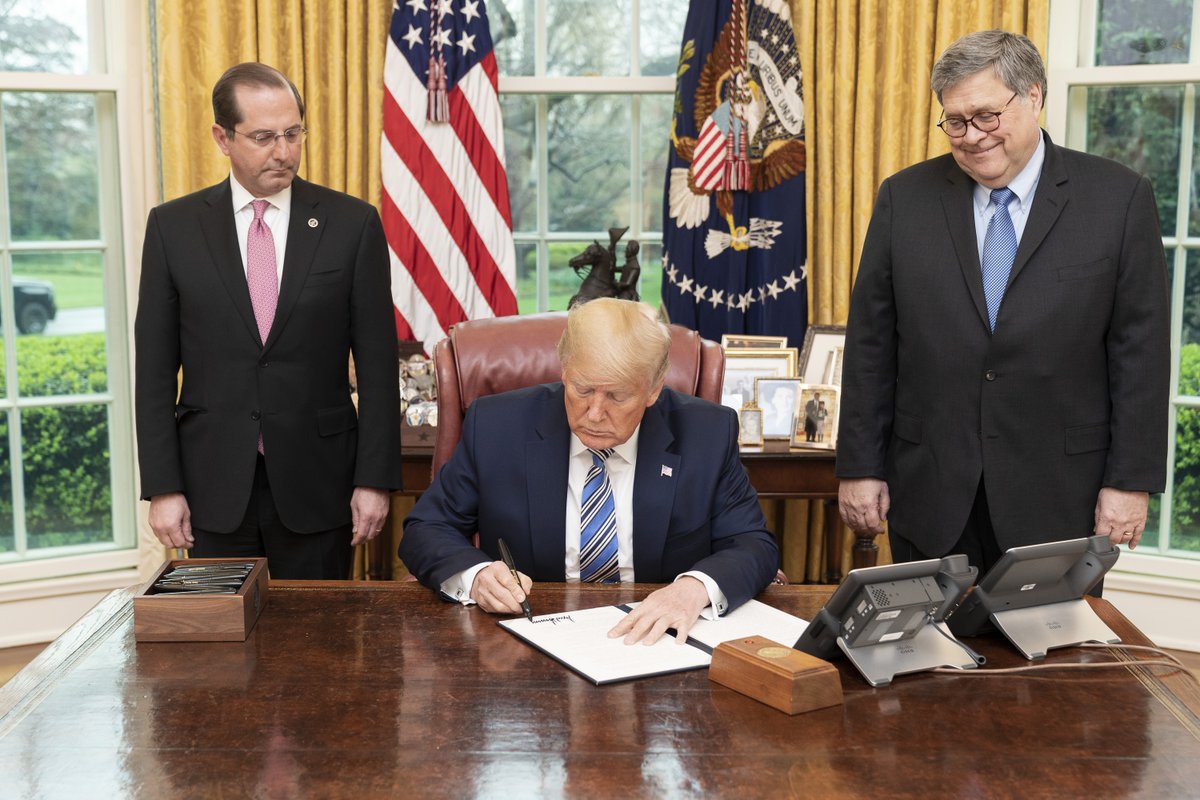 12.9K people are talking about this

Attorney General William Barr had a strong message for “hoarders” as well, noting that anyone found to be in violation of the executive order was at risk of being raided by federal agents.

“If you have a big supply of toilet paper in your house, this is not something that you have to worry about, but if you are sitting on a warehouse with surgical masks, you will be hearing a knock on your door,” he said. (Presumably followed by  the “bang” of gunfire if you resist.)

Barr said that people hoarding medical goods and materials on an industrial scale for the purpose of manipulating the markets would be affected, not businesses obtaining supplies for operation.

According to the order, the president is deriving his authority to order government agents to seize hoarded medical items — and, according to the text, this EO is only directed at vitally needed PPE — from the Defense Production Act, a Korean War-era law Trump invoked late last week.

‘I also get a lot of calls that are very disquieting’

“Accordingly, I am delegating to the Secretary my authority under section 102 of the Act (50 U.S.C. 4512) to prevent hoarding of health and medical resources necessary to respond to the spread of COVID-19 within the United States,” it adds.

The good news is, according to White House trade negotiator Peter Navarro, U.S. companies are stepping up their production of PPE to meet increased demand.

“What is interesting now is we have a tremendous voluntary response,” Navarro said Sunday, as reported by USA Features News. “I’m working with the National Association of Manufacturers, the textile organization, and all these groups and companies are repurchasing factories. That’s what’s going to make the difference in the short run in terms of how we do this.

Also on Sunday, Navarro noted that the administration has been tipped off that hoarding of PPE is indeed occurring.

“I also get a lot of calls that are very disquieting. Brokers are offering millions of items, whether they are goggles, masks, or whatever, and you go through three different brokers, tracing to a warehouse in [Los Angeles] that’s allegedly got ten million masks and they want to charge you seven times what they cost,” he told reporters.

Navarro said brokers should contact the government, which would pay a “fair price” for the items, but that came with this warning: “But if you don’t do that, we’re going to come for you and make sure that doesn’t happen in this country.”

Why should there be a…

Why should there be a shortage. Most PPE equipment used in hospitals is manufactured by companies that only sell to hospitals. The public can't get their hands on most of these supplies. Alcohol can be produced in millions if not billions of gallons and it is one of the main ingredients in hospital sanitizing wipes etc. There should be no shortage. Adding some overtime shifts and working extra time should enable more supplies to be manufactured for sale to hospitals and medical clinics. And masks? They are just cotton and paper. There should be little trouble making extra ones even if there is heavy demand. Certainly the public can buy alcohol wipes at the dollar store but confiscation by the gov. of these items? Kinda ridiculous.

Why does Carrot top go off of the rails weekly, and hug Satan?

Why does Carrot top go off of the rails weekly, and hug Satan? Does anyone wish that "christians" had not been convinced by Satanic influences that they should no longer protect their God given rights by training as a unit after Sunday services? The existence of a milita alone is an effective deterrent, and would likely quell the tyrannical inspirations of most of the psychopaths that we euphemistically call our legislators.

Beware what you call others, it is now the label pinned on you.

Wondering if this will apply to pharmacies that have a suppy of hydroxycoqualine (SP?), which shows remarkable promise, yet the FDA twiddles their fingers and thumbs their noses at it - "It needs more tests!". Yet we're hearing about full speed ahead for a Bill Gates government sponsored toxic cocktail vaccine that the rumor mill says will be mandatory. Even President Trump is on camera saying that people HAVE to take the vaccine. No thank you.

Ambivalent towards this article. We do not need (or should allow) our civil liberties to be infringed upon, I get that. Yet, what happens to the front line workers (Doctors, Nurses, CNA's, Therapists, etc.) who are working WITHOUT protection because people/corporations are hoarding medical supplies? The government failed to prepare but we are going to punish those who are in harm's way helping all of us in our time in need??? That isn't very Christian, ethical, or moral is it? Besides, our rights and liberties have already been infringed upon over the last decades. We were just like a bunch of frogs in a boiling pot who thought the water was fine and invited others to jump right on in.

Please don't bind the hands of justice, law & order during this trying time. USA could be gone if we allow Democrats to continue promote chaos and destruction. JD Hays, we might not have an America for the Libertarians to complain about, soon, if DEMS' "Russia 3.0 - Coronavirus" goes on to destroy our economy.

Dave, Do you remember the story you did on Ft Collins Co, which has a large warehouse full of medical supplies? Posted Oct 11 2017. My opinion, If there is one then there are many. The under ground tunnels would also have there own med supplies and hospitals. If the medical supplies were for the American people they would have offered them to us already and could restock again in better times. Therefore I think these supplies are for are enemies.