Why China Is Going to Wage War On America

The whispers of the coming World War III are turning into a deafening roar. Once considered a remote possibility, China is ready to begin World War III and it will probably center on Taiwan. This will be in retaliation for the attempted destruction of the Chinese economy by Trump.  Is Trump acting on behalf of American interests or globalist interests to break the back of the nationalism as a whole? That is a question that will be explored in more detail in a future article. Suffice to say, for now, the Chinese view America's actions as being globalist friendly and are designed to cause the failure of nationalism in China. How did this conflict with China reach the Apex in the modern era. It began with Obama's Trans Pacific Partnership trade agreement in which China was totally cut out of a major trade deal in its own backyard.. In 2015, I printed the following analysis from The US Trade Office with regard to the TPP:

AMERICAN COMPETITIVENESS IN THE ASIA-PACIFIC

“The TPP is the cornerstone of the Obama Administration’s economic policy in the Asia Pacific. The large and growing markets of the Asia-Pacific already are key destinations for U.S. manufactured goods, agricultural products, and services suppliers, and the TPP will further deepen this trade and investment.  As a group, the TPP countries are the largest goods and services export market of the United States. U.S. goods exports to TPP countries totaled $698 billion in 2013, representing 44 percent of total U.S. goods exports.  U.S. exports of agricultural products to TPP countries totaled $63 billion in 2013, 42 percent of total U.S. agricultural exports. U.S. private services exports totaled $172 billion in 2012 (latest data available), 27 percent of total U.S. private services exports to the world.America’s small- and medium-sized enterprises alone exported $247 billion to the Asia-Pacific in 2011 (latest data available)…”

One can quickly see the enormity of the agreement. Eleven nations totally engaged in all-out trade and all of this was in China's backyard and they were totally left out. Why? Because China is led by leaders that are fiercely nationalistic and the TPP was the brainchild of the globalists, this put China at odds with the United States. But at least they had a trade deficit advantage with the United States. At least they did until Trump became President. To demonstrate the enormity of the TPP to China, I published the following analysis which was printed in 2015, also on The Common Sense Show:

“The United States is negotiating the TPP with 11 other like-minded countries (Australia, Brunei Darussalam, Canada, Chile, Japan, Malaysia, Mexico, New Zealand, Peru, Singapore, and Vietnam) that share a commitment to concluding a high-standard, ambitious agreement and to expanding the initial group to include additional countries throughout the Asia-Pacific region…:

Seven of the 11 TPP nations are connected to the South China Sea. So, how did China respond? They responded militarily. They were posturing for war back in 2015 because they were left out of this major trade agreement. This led the Chinese to illegally claim personal ownership over the South China Sea in complete violation of international law. The following map and accompanying analysis makes it clear china was a on collision course for WW III. 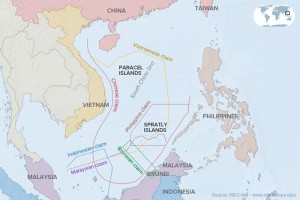 Please take note of the Spratly Islands. China began to build artificial Islands to serve as a type of aircraft carrier that China does not possess in its arsenal. China was clearly planning to take on the US Navy with this move and the Chinese anticipated that the US would move to keep the South China Sea open for trade, specifically for the TPP. When one looks at the nations most impacted by China's planned geographic embargo, the seven principals in the former TPP agreement were impacted.[/caption]

Trump Averts War In 2016 by Cancelling the TPP

A funny thing happened on the way to World War III over this trade agreement, Donald Trump was elected to the Presidency and then he promptly cancelled the TPP trade agreement in order to promote and stimulate American manufacturing at home and to preserve what's left of American sovereignty. When Donald Trump was elected, the Chinese government had high hopes that the upward swing of their economy would continue uninterrupted with Trump's cancellation of the TPP. However, that honeymoon had a very short shelf life. In order to fulfill his campaign pledge to correct glaring trade deficits and to stimulate domestic manufacturing, Trump began to systematically dismantle every economic advantage that had been enjoyed by the Communist Chinese government. This move sent a clear message to the Chinese that America was siding with globalist interests, whether that was Trump's intention or not, which were designed to punish nations that would not totally submit to the globalist bankers and their New World Order agenda. And since it appears to China that America's military might is decidedly globalist-serving, this put the cross-hairs on the United States.

The Irony of the Chinese-American Conflict

Is America friend or foe to China? The accuracy of your answer depends solely on your perspective. French leader Macron stated that a EU Army is needed to combat the nationalist desires of Russia, China and the Americans. On one hand, this makes the three super-powers defacto allies. However, the wild card here is whether or not Trump can control his administration. Mattis is an unmitigated traitor who aligned with McCain and Clinton as he trained ISIS troops in the Jordanian desert. Trump's son-in-law, Jared Kushner is aligned with George Soros. So much for having control over your own administration. At the end of the day, can Trump indeed gain control over the American government and wrestle the power away from the Deep State? Philippines President Duterte, stated he liked Trump but he does not control his own government so aligning with America is out of the question. In the next article in this series, I will explore how this pervasive belief about who is really running America is driving international politics. As a teaser for Part II, I will say quite clearly that if Trump wanted to avoid WW III, he would declare a national emergency and shut down the border. Further, he needs to prosecute one major Deep State operative. My choice would be Debbie Wasserman Schultz. Her employees, the Awan brothers engaged in outrageous behavior resulting in massive acts of obstruction of justice in "bleaching" many of the Clinton emails when Wasserman Shultz was the head of the DNC. Her indictment would cause the Deep State to retreat in sheer terror. And terrorism is what the American people would get back in return. However, this could lead to a purge of Deep State operatives, most of them within the Democratic Party. Further, these events could culminate in an assassination attempt and very likely a civil war. There is a lot to unpack in Part II. China has food shortages. They face rebellion in the outlying provinces and they are an oil importing nation. They cannot afford what the globalists and what Donald Trump's tariffs are doing to their country. They are cornered and they will strike if there is not a change in foreign trade policy towards China and a war is what the globalists want In the meantime, both Russia's and  China's respective war machines are again on the move.